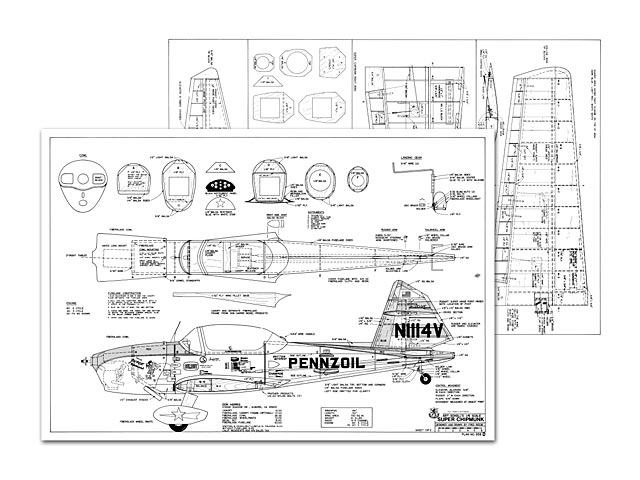 Art Scholl and his Super Chipmunk were stand out attractions at air shows all over the United States. His skill and showmanship kept him in high demand for movie and television work. The DeHavilland Chipmunk, used as a trainer for England and Canada during WW II, has been highly modified to handle the bigger engine and greater flight loads imposed by air show work. The rudder and fin have ben enlarged and the wing tips have been clipped. The spin strakes ahead of the stabilizer have been removed and an entire new cowl has been made to cover the opposed, flat six cylinder engine with more than twice the original horsepower. Art continued to modify and improve the Super Chipmunk over the years and each new set of pictures of the aircraft showed some new changes or additions.

The plans reflect the changes observed in the color photograph set of the Super Chipmunk available from Repla-Tech International (48500 McKenzie Hwy, Vida, Oregon 97488). These photographs show the aircraft from many angles and include close-up shots of the cockpit interior and many other details.

Don Harris, a modeling buddy since childhood, has made molds for the cowl, wheel pants and canopy and will also have a complete fiberglass fuselage available for scratch builders. He has also had a decal set made for this model. His decals and other fiberglass parts were used on the prototype.

The model spans 66 in and has 720 square inches of wing area. Power in the prototype is an Enya .90 4-stroke swinging a Master Airscrew 14 x 6 propeller. As originally flown, the model weighed 8-3/4 pounds. Since then I have added an onboard ignition system and a smoke system which raised the weight to 9-1/2 pounds. Even at this weight the takeoff roll is less than 25 feet. The model does not know it is overweight. The big wing and powerful engine fly the model like a pattern ship. The Super Chipmunk will easily do the IMAC patterns - that is if you can do them.

The wing is extremely forgiving and has no tendency to tip stall on landings or take-off. Even though the airfoil is semi-symmetrical, the model will fly inverted with only a touch of down elevator and will do both inside and outside maneuvers with ease.

Just like its namesake, the Super Chipmunk will do a true Lomcevak. Start with an inside snap at full power in a gentle climb and hold full aileron, rudder and elevator through 1-1/2 snaps and then feed in full down elevator while maintaining full aileron and rudder deflection. If your timing is right, the model will gyrate and then the tail will tumble forward and around, end for end. It's spectacular, especially with smoke.

If I had the model to build over again, I would try to lighten it some. I would try for a dry weight of 7-1/2 to 8 pounds for best performance. The model handles the weight very well but it would be nice to be able to do one more roll going uphill and some of my landings might be softer.

My Super Chipmunk was designed to be a sport scale and pattern ship. The outlines are correct and only the airfoil has been changed. If you plan to build the Super Chipmunk for pattern or sport use, I would suggest that you use the dihedral as called out on the plan for pattern use. The scale dihedral produces some roll in knife edge flight that must be corrected with opposite aileron.

CONSTRUCTION: Many years ago I built a Jack Stafford Chipmunk (oz414) and I think his construction method for this type of oval fuselage is the easiest to build. However, you must be very selective when picking wood or the model could be heavy. Sig contest weight balsa is ideal for the 1/4 and 3/8 in fuselage sides and corners. The fuselage is built as a typical slab sided box with narrow top and bottom sheeting. The corners are planed off at a 45° angle and 3/8 sheets are glued on. The fuselage is then planed and sanded to the final oval cross section. 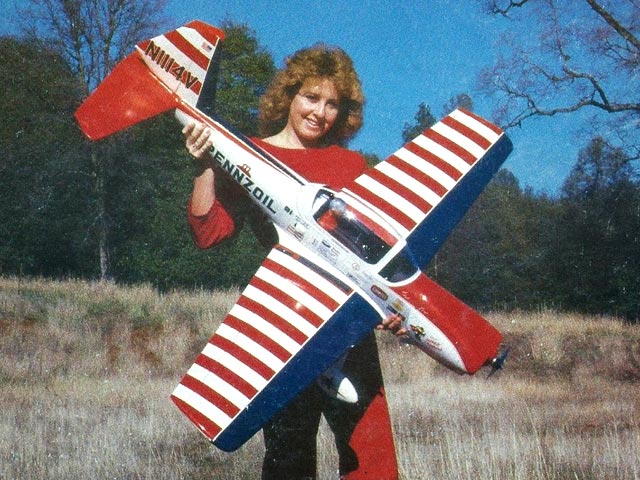