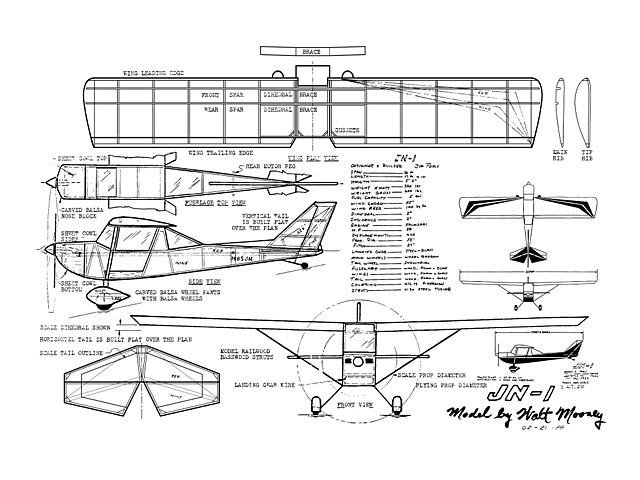 Quote: "This month's Peanut is an easy-to-build replica of a delightful homebuilt sport-plane. Mr. Peris, himself a modeler, has given his ship the same proportions that make for a fine flying model.

This is a Peanut-scale model of a lightweight homebuilt design by a former member of the North American Flightmasters. It has simple lines and the right proportions to become a fine flying model. The shape of the design lends itself to simple construction and light weight. Without making any special effort, this model turned out to be a reasonably light Peanut. The model in the photos weighed six grams, uncovered, and eight grams complete, without the rubber motor. The finished weight included the color trim, the plastic propeller and two coats of nitrate dope. The model has a stable flight path but the highest flight time to date has been only 28 seconds, because the propeller installed is relatively small. The propeller is a small CO2 prop from Peck-Polymers that is naturally colored brown and has a pleasing shape, hence its selection for the model.

The real inspiration for making this model was its fancy color scheme. Mr. Peris sent me a colored photo of the real airplane and a three-view. (The three-view is reproduced on the plan.) The airplane is white and trimmed with red and wine. Now where is any wine-colored tissue to be found?

Because the model has such a simple time-honored structure, this article is going to concentrate on duplicating the color scheme of the real airplane.

The assumption is that you have completed the model structure and have sanded smooth ready for covering. Using lightweight white tissue to cover the complete model, water-shrink the white tissue. When it is dry, give the model two coats of clear dope.

Now, red tissue is, if you'll pardon the pun, readily available at most any model shop, but "wine”; ah, thars another matter. Well, there are people who make paper flowers. And paper flower tissue comes in almost every color of the rainbow. Art stores carry it. It is a little heavier than good model tissue and it has no noticeable grain direction. In addition, it is not colorfast if it gets wet, and besides it does not shrink very well. If used with care, however, it can increase your color scheme options quite a bit beyond the standard red, yellow, blue, white, and black that is usually available in hobby shops. So go down to an art store and select the colors needed.

Now, decide how many similar color patterns are required for your model. In the case of the JN-1 there are four required of each color stripe for the wing and for each half of the horizontal tail. Fold your colored tissue so that there are at least four smooth layers and lay it down over the newspaper. An extra layer or two of colored tissue at this point will give some spare stripes in case of an error. Now tape the corners of the tissue layers to the newspaper so that it won't move. Next, tape the plan, or a tracing of it, down on top of the tissue.

Get a nice new razor blade, with a sharp corner point, and a straight edge for a guide and proceed to cut out the decorative stripe down through the plan, several layers of tissue, and at least one layer of the newspaper. Now you can lift out at least four identical colored-tissue stripes.

Get out your dope brush and some very thin dope. Carefully take one tissue strip and lay it in place on the white tissue covered wing. Make sure it is located properly and, starting in the approximate center, dope through it to make it adhere to the white tissue. The thin dope will penetrate the flower tissue very easily and it will make a very smooth sharp-edged stripe.

If the tissue stripe is not exactly located as it is being doped in place, it can be shifted around as long as the dope is wet. Check the stripe location and orientation as soon as the center is initially doped to get it just right. If, after the entire stripe has been doped in place the location is incorrect, it can be removed by wetting it with a brush and thinner and gently peeling it off. Extreme care may allow you to get it off in good enough shape for reuse but generally a new stripe is in order.

The bottom half of the fuselage is simply double-covered with the wine tissue. Cover the bottom first and trim the edges. Cut one straight edge on a piece of wine tissue to use as the upper color separation line and cover each side, locating that line very carefully and doping from the center towards each end.

The top of the wheel pants have a compound curve to them. This means that the colored tissue must stretch a bit to give a smooth result. A paste stick was used to attach the tissue to the pants, and we found that it took two pieces of tissue to do each pant. The paste softened the tissue so that it wrapped smoothly around the top of the pant to the top centerline where it was trimmed with a sharp blade. Control surface hinge lines, cowl cooling inlets, and wheels were colored with a black felt pen.

This model wanted to fly straight ahead and required about five degrees of left thrust in order to circle within the confines of a basketball court indoors. It balances in a level attitude when supported at the second spar from the leading edge, and required a little bit of down elevator to cure a slight stall."

Quote: "Another home-built: James E. Peris' JN-1, plan by Walt Mooney from the February, 1989 issue of Model Builder. This plan features completely redrawn wings, ribs and horizontal stabilizer, the addition of the dihedral brace, and replacement of the three-view with one which depicts the wing and fuselage markings." 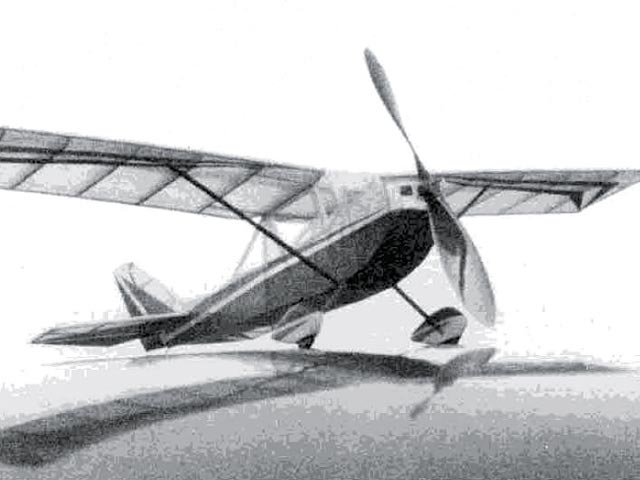 Excellent description in the article on how to cut coloured tissue trim. One additional thing I’ve done that helps it to put a piece of waxed paper between the top layer of your tissue stack and the paper pattern on top. For whatever reason it seems to result in sharper cut lines with fewer catches and tears.
Tim - 23/08/2021
I know it's not your usual policy to post pictures of actual aircraft, but the real JN-1 is little larger than a model. I thought you might be willing an to make an exception, in this case [pic 005].
Jan Novick - 24/08/2021
Add a comment