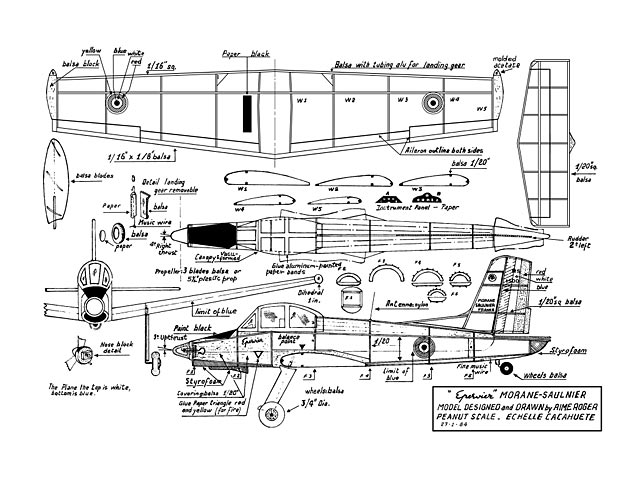 Quote: "Morane Saulnier Epervier, by Rober Aime. From France comes a beautiful scale model of a French recon airplane that just begs to be built.

The Epervier (Sparrow Hawk) dates back to the year 1950. France was deeply involved in the war to keep Algeria French, and badly needed reconnaissance aircraft to replace their aging T-6s. Unfortunately, the government was a bit stingy with its allocations for this purpose, and only two of this excellent aircraft were built. The test pilot, Claude Barteau spoke very highly of the Epervier in his book. I saw the plane in the sky above my home as a boy, as Salon is only thirty kilometers from the test center.

The model weight is eight grams, largely due to the use of 1/20 square stringers, very light balsa for the wing-tips, and styrofoam for the underside of

the nose and for the tail block on the fuselage. The wheels are turned on a drill from balsa. The canopy is vacu-formed clear plastic. I made the propeller blades from plastic, but you may wish to make them from balsa. There are three of them, and they mount to the balsa spinner. You will note that the landing gear (retractable on the full-size plane) is made removable, being plugged into short lengths of rolled paper or aluminum tube.

If you wish to mount the dual instrument panels, they can be mounted on a false floor in the canopy. Styrofoam would be the way to go on these. Another nice touch is to mold the clear plastic light shells at the wingtips.

Special care should be given to the mounting of the wings. The left wing is set at four degrees negative and the right wing at two degrees positive. For successful flying, don't forget that Four degrees of right thrust is necessary to finish off the flying trim.

Covering was done with lightweight white tissue on top, and blue was used for the underside. Markings and letter-ing were done with colored tissue, and the model was clear-doped.

An 11-inch loop of 3/32 rubber will get you started on your flight trimming. Good luck and happy landings!"

Quote: " This one is a Peanut Scale M.S. 1500 Epervier by Roger Aime from the July, 1984 issue of model Builder. To ensure symmetry of the flying surfaces, I've done a complete redraw of the wing and horizontal stabilizer. In the article, Mr. Aime asserts that the landing gear was 'retractable on the full-size plane', hence the removable feature on his model. In actuality, the aircraft had a fixed landing gear." 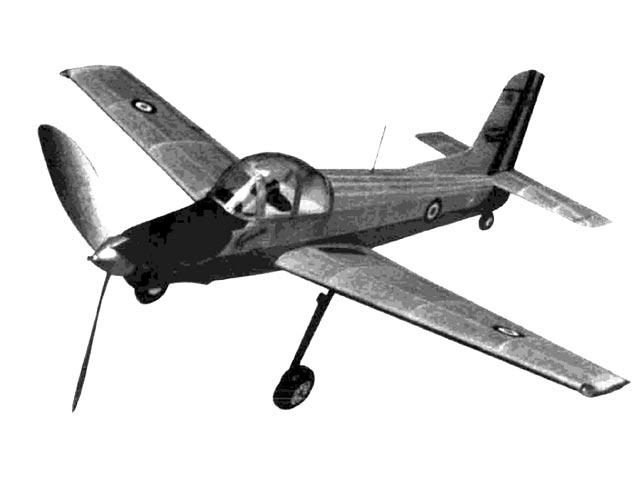