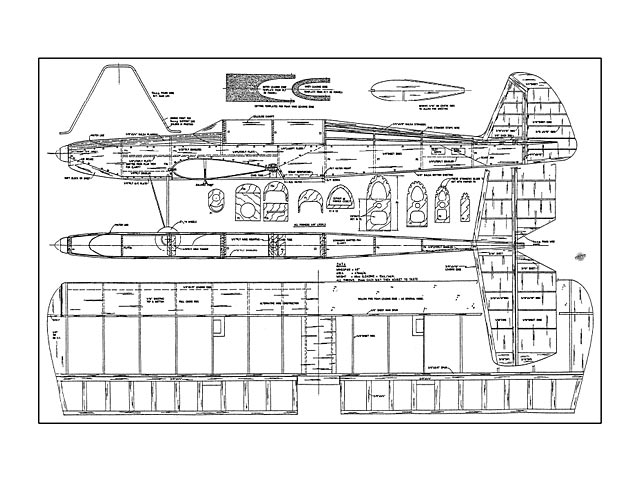 Quote: "Dalotel 3D. Hang on tight for some extreme aerobatics of the electric kind with John Rutter's 48 in span, four-channel sky-rocket!

I hope nobody is deceived by the name of this model. If you close one eye and squint with the other while looking at the side-view of the fuselage you might just about be able to make out Dalotel-like lines to the fuselage and tail. I actually scanned a side-view of the original Dalotel before stretching it to suit what I wanted, which was a highly acrobatic electric model aeroplane. The tail is scalish but the wing plan view has nothing to do with scale!

Let's commence with the wing: I eventually started construction with the wing. Eventually, because I had a number of ideas on construction and couldn't make my mind up! My original idea was to use a full-depth spar that was slotted for the ribs and this would probably be the easiest way to go. I've drawn this on the plan as a scrap view and it should work well, but I wanted to ensure a very smooth leading-edge so I thought I'd use a mixed construction where the wing was all-balsa behind the spar and foam in front of it. Consequently the leading-edge of my model is cut from pink foam as in the pictures. It's worth cutting the centre pieces out, by the way, as this leaves the entire LE weighing only 1-1/2 oz rather than 4 oz (my completed wing, including the tips and ailerons only weighed 4-1/2 oz, so that centre bit of foam weighs almost the same as the rest of the construction).

Once the foam is cut, it's glued to the spar with Copydex. The spar itself is medium 1/8 balsa and as I didn't have any 4 inch stock I used a long scarf joint to make the length up. Glue the tip ribs onto the ends of the LE making sure they are straight and then attach the half-ribs to the spar, having marked their positions from the plan. Here I found the section of foam from which I'd cut the LEs made a most useful holding device. See the picture. When this lot was just about set, I inverted it and glued the ends of the ribs to the trailing-edge I'd pinned onto the board. This is where you find out if you were accurate in your rib construction as the length could differ and the ends may not all be in the middle of the TE (Like mine!) Now you know why I thought the entirely built-up version might be easier - it could be more or less slotted together in your hand.

Tips are from 1/8 again and are held in place with gussets from scrap. Aileron servos (I used SD 200s as they are light, powerful and fairly cheap!) are screwed to small pieces of light-ply which, in turn, are glued to the spar and ribs. The leads are taken, via extensions (you could simply chop and extend the wires), through the ribs to avoid weakening the spar. Use scrap wood to fair in the mountings level with the wing surface; this gives something for the film to stick to later on.

I used a SLEC balsa stripper to cut some fairly soft 1/4 to 3/8 wide and built the ailerons over the plan. A guillotine from Proops (one of those things you buy at shows with the idea it may be useful some day) made it easy to produce 'ribs' that were all the same length. The leading-edge of the ailerons is eventually planed to a 'V' shape for centre hinging but the trailing-edge is left square.

Tail surfaces: The tail could be built in the same way as the ailerons, but I felt I needed something a bit thicker, stronger (I had a similar size model snap its tail in a screaming power dive - something to be avoided) and resistant to warps without adding too much drag or weight so I changed the construction method to one I picked up from Aeromodeller many years ago (Eric Coates invented it I believe, for F/F scale). Here the outline of the tail is cut from 1/16 and pieces glued to it for stiffness and strength where needed, turning it over to do the second side when the first has set. Fin and tail are left largely 'square' with the leading-edges rounded off.

The elevators and rudder are slightly different in that I didn't use a trailing-edge reinforcement and tapered all the ribs down to the original 1/16 core after construction was finished. I used a 14 gauge piano wire joiner to keep the elevator halves together in flight. I left the horn bal-ance on the rudder as a concession to scale but it could be left off.

If you don't like time-consuming, fiddly construction, then I suggest you build the tail end like the ailerons but using springy, light, 3/8 balsa. In the end, the weight of the complete tail end was just 2 oz before covering.

Power system: Before starting with the fuselage, you need to think a bit about the power system. The model was designed with geared, large propellers in mind and although it would probably fly on a smaller, direct drive prop, it wouldn't give the same sort of performance. The minimum I would recommend as a power source would be something along the lines of an Overlender 650, geared 2.7:1 (Perkins 'box) and 12 x 10 on seven or eight cells. It will be a bit livelier on ten cells and/or a Graupner 600 Race, but needs a smaller prop such as an 11 x 8 CAM.

For real performance, mine uses a Mega 22/30/3 brushless with a Jeti 40 3p controller (opto) and a 2:1 'box driving a Freudentaller 14 x 10 carbon folding prop, all sucking amps out of ten 2400 Sanyo SCR cells. I bought my motor/gearbox/controller from Jepe in Holland, but Gordon Tarling in the UK does the motor and controller cheaper now - he also sells the RF props (but not the gearbox?).

Fuselage: Start by making up the fuselage sides. You will probably have to scarf together some wood to make up the length; I put the joint near the tail. With electric models, I often don't bother to reinforce the sides, but as this model has a rather large hatch at the top for battery access and a big hole underneath for the wing, a bit of 1/32 ply glued to the inside of the sides with contact cement is a penalty worth paying for longevity and peace of mind.

I made all my formers from light-ply to avoid grain problems and cut the holes for the servo leads with sharpened brass tube. Lightening holes were painstakingly cut with an electric fretsaw. Although I put my servos right at the back of the model for very direct control, it is of course possible to leave them in the traditional position and use pushrods or snakes, especially if you don't use small servos - but then fitting the rest of the radio gear in will be a bit of a squeeze.

Once the sides and formers are ready it's time to start putting them together. Put one side on the board with inside uppermost and glue formers 2 to 6 in place as well as the battery tray. I used thin cyano for speed. Put the second side on the board, check the positioning of the first side on it with squares, and glue the formers in place with thin cyano again. Position the whole thing over a straight line on the board and pull in the tail to glue together..." 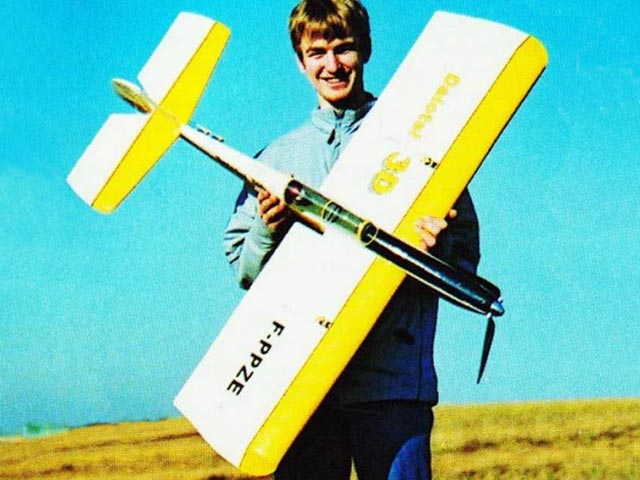