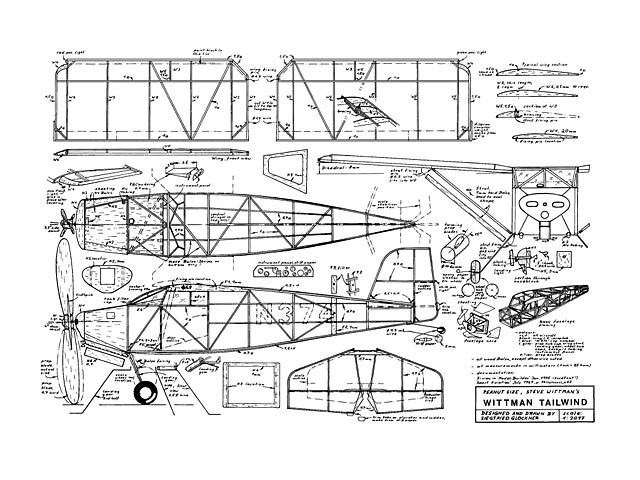 Quote: "Wittman Tailwind, by Siegfried Glockner. Second Peanut to be published by this West German modeler; it's well known and a good flier.

The Wittman Tailwind was designed by Steve Wittman as a fast, two-place, cross country aircraft. Its small size enables it to cruise at 150 to 160 mph on 100 hp. Steve got a lot of experience as a racing pilot. The 'fat' fuselage and straight lines should not confuse you, concerning the aircraft's performance. Steve knows where to streamline effectively (see also Sport Aviation, July, 1980: story of Big X).

The model shows Steve Wittman's own aircraft as flown in the sixties and seventies. Plans of the Tailwind are offered to the homebuilder market. Dozens of Tailwinds are flying, which proves it to be a well-designed aircraft; also one the average homebuilder can construct. I liked the aircraft when I saw the first photos of it in a magazine and I knew someday I'd have to build a model of it. With Peanut models it is easy to realize your dream of a certain model aircraft. I built the model after a three-view, published in Model Builder, January, 1975. The model is easy to build and suitable as a first Peanut to be built from scratch.

FUSELAGE: The fuselage framework and nose section are built separately and glued together after covering. Build the fuselage sides in the common manner, one side on top of the other. The tail posts go up to the upper longeron, and are cut to length after covering to enable the installation of the stabilizer. The covering is not suspended by a balsa stick above the stabilizer. This makes it easier to change the stabilizer incidence on trimming. Glue the fuselage sides at the tail posts together and join the sides by the means of the cross braces. Note that the lower cross brace F4 at the fuselage front end of the framework is larger than the other cross-braces to install, and takes the loads of the landing gear. The diagonal bracing goes from the position of F2 to the front end at the fuselage sides and bottom. On the fuselage top, the diagonal bracing ends behind the cockpit glazing. Fortunately, the original has some diagonal bracing in the cockpit area to give a torsionally stiff fuselage.

When the basic framework is assembled, add the covering inside the cockpit. Paint it black before installation Add the stringers (0.7mm square balsa) on the fuselage sides, top and bottom, and the cockpit framing. Join the nose formers N2 and N4 by the two parts N3. Cut N3 a little oversize to make it easier to sand it to the contour of N2 and N4. Cover the nose with 0.4mm thick balsa. The oil cooler and motor cooling air outlet at the bottom of the nose is built from 0.7mm balsa but not yet installed. Build up the noseplug from N1 and N5, N5 snugly fitting into N2. Sand N1 to the contour of the nose, and cut the openings for cooling air and landing light.

EMPENNAGE: The vertical and horizontal tail is built from 0.7mm square and 0.7mm thick balsa. The curved balsa parts are bent on a form. Boil the sticks 20 to 30 minutes before bending. There is only one stick, no laminations.

WING: The wing, being of rectangular form, is easy to construct. Cut the root rib W1 a little oversize to help sanding it to a tapered cross-section. Form 12 ribs W2 as a rib block between two plywood ribs to equal shape. Shorten two ribs W2 to get the two ribs W3 afterwards. The wing tip leading edge is cut from 3mm balsa to the planform and glued in place. After the wing has been assembled and the glue has dried, sand the leading edge, tip leading edge and root rib to shape. The aileron counterweights and position lights are added after covering..."

M & S - A nice, thoroughly detailed Peanut Wittman Tailwind plan, by Siegfried Glockner from, the February, 1985 issue of Model Builder, which features some unique bracing for the wing strut fixing. Only modification is equalization of the horizontal stabilizer. - Jan Novick 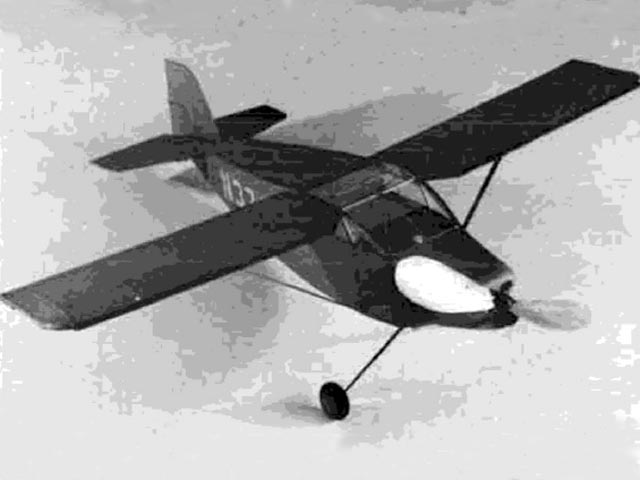