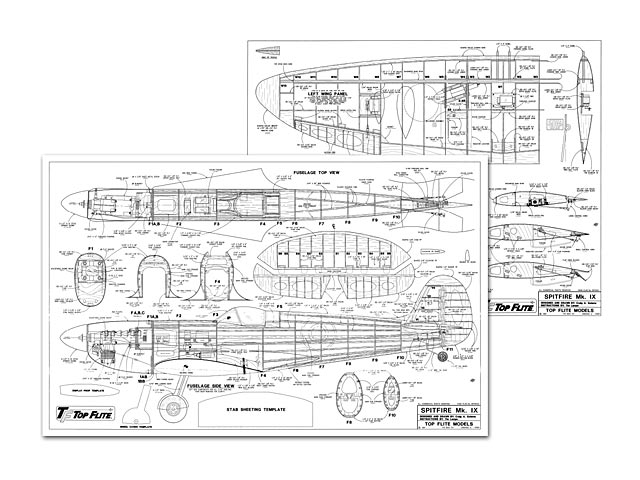 As requested on the Wanted page.

Quote: "Congratulations and thank you for purchasing the Top Flite Gold Edition Spitfire. The model we have chosen to replicate is the Mk IX - the second most popular Spit ever, reaching a total production of 5,665 units. Considered to be the finest Spitfire of all [citation needed], the Mk IX went into operational service in July, 1942.

Though all of the models in the Gold Edition line feature standard construction techniques and basic materials that most modelers are familiar with, we feel that the Spitfire may be the easiest one to build. Although the Spitfire is a scale model with plenty of detail, it is one of the cleanest subjects without any tricky areas found on some scale birds. If you're not already in love with the Spitfire, you're in for a surprise! The Spit doesn't seem to have the menacing looks of the husky P-47 or the speedy P-51, but as you near completion you'll grow to appreciate the clean lines and round contour of your Spitfire. And after the covering is done, you've added all the scale details and put the wing on the fuse, you'll be transformed into a true Spitfire fan! With the British roundels and invasion stripes, your Spitfire will surely stand out from the rest of the models on the flight line!

Another phenomenon with the Spitfire is its deceiving size while under construction. At first, you may think 'Gee, these tail surfaces sure are small' or, 'This model doesn't have a very big wingspan.' But don't worry. Once you join the tail surfaces to the fuse, add the cowl and spinner, then glue the wing tips to the wing and put it all together, your enthusiasm will soar when you realize that this really is a good size model!

One last note before you get started: we highly recommend you get some pictures or a book about Spitfires, or send for your documentation package as soon as possible. This way, you can study the drawings and photos to get a feel for how your Spitfire should look when you're done. This will also help you figure out what scale details to add and decide on a trim scheme (you can also dream about how cool your Spitfire is going to look.) One of the books we recommend is the Squadron/Signal Publications Spitfire in Action book No.39 (SQUZ1039). It features lots of historical and technical information as well as detailed drawings, photos and trim schemes.

Well, this should be enough to get your juices flowing, so move your other projects off your workbench, say goodbye to your significant other for a while and read on.."

Note pages 8 and 9 of the instructions show parts ID sheets. It should be possible to generate full size parts from these sheets.

Along with the North American P-51 Mustang and the Lockheed P-38 Lightning, the Supermarine Spitfire earned its right to be considered one of the best fighters of the Second World War. Its clean, graceful lines and elliptical wing were the brainchild of RJ Mitchell who, unfortunately, died of cancer before the first flight of the prototype. The Spitfire design lived on however, and underwent various improvements and refinements to its airframe, powerplant, and armament.

The version chosen by Top Flite for its kit is the Mk IX, the variant that came to be because of the introduction of Germany's daunted Focke-Wulf FW-190. The Mk IX not only matched its adversary in performance, it was considered by many as the finest Spitfire of them all.

Long time R/C warbird enthusiasts will notice that the popular Top Flite warbirds have been filtering back into our lives. Some of us, eager to sink our teeth into a warbird, may have felt a little intimidated by the Top Flite kits of old. This is not the case with the new Gold Edition series. With the goal of making construction user friendly, Top Flite has used CAD technology to re-engineer and vastly improve these earlier designs and make parts fit more accurately. Improvements to the flying characteristics have also helped Top Flite take their 'new generation warbirds into the 90s and beyond.

Starting the familiarization process, the first thing that hit me was the smell of the wood. Nothing like the smell of balsa in the morning. As I continued rummaging through the box I could see that the quality of the wood was good: clean and straight-grained. I was impressed with the die-cutting; nice sharp cuts, clean, no mashing. There were also some laser-cut parts. Laser cutting seems to be the way to go these days, high tech for model airplanes. The vacuum-formed ABS cowl, wing fairings, and gun blisters are all of good quality and represent a nice addition to the kit. One additional item that I thought would have been nice to have vacuum-formed (but wasn't) was the intake scoop on the underside of the fuselage. Too bad!

The plans are full-size, clearly laid out, and give part location and description. It is used in conjunction with a well-illustrated assembly manual into which Top Flite has obviously put a lot of work into. Included are not only pictures and step-by-step text, but helpful building tips to make the job easier. Everything you need to know is in it. Just to name a few other items needed to complete the model like hardware, building supplies, tools, and a layout of the die-cut parts. Then there are also sections on engine types, retracts, flaps, and even some tips on scale detailing! What more could you ask for!

Tail section: Building a strong, but lightweight stab and fin is important to any aircraft, especially a scale model. Top Flite's method of construction seems to work well. The ribs have jigs attached to them to keep them straight and true. A die-cut inner core interlocks with the ribs. This core plus the addition of leading (LE) and trailing edge (TE) pieces finish up the structure. With the sheeting added, the result is a fairly lightweight assembly. Keep in mind the importance of having good contact between the sheeting and the ribs. One small glitch with the fin: the 3/16 x 3/8 LE should have been a little wider. It falls short because of the curve of the fin.

On the full scale Spitfire, the elevators and rudder were fabric covered. To achieve a scale-like appearance, die-cut elevator and rudder outline shapes are used. To these, blocks and ribs are added. These assemblies are then sanded to tapered shape. This method of construction is simple, but effective, in creating this added look of realism. It will take some effort in sanding the tail section to its proper cross-section, but it's worth it. One scale step further would be the use of scale hinging. A nice touch, but I chose to stay with the hinges provided. Next time.

Wing Building: the wing posed no real problems. The quality of the die-cutting really shows up here. The notches in the ribs and other selected die-cut parts fit perfectly. I had already decided to install retracts and flaps since it wouldn't do justice to this model if I hadn't. This decision, however, should be made early on.

The wing structure might look a little on the fragile side, but the use of shear webbing and interlocking trailing edge pieces help stiffen it. The 1/16 sheeting plays an important part of the overall wing structure. So, once again, make sure you have good contact between all the mating surfaces. The joining of the outer panels to the center section is done with the help of provided jigs which aid in keeping the wing straight during assembly. Weights, (sand bags work great) are used to hold everything down while everything sets up.

Undercarriage: At this point, the retracts are needed. The units of choice are the Robart #605HD (Heavy Duty). They use a 3/16-inch wire strut and are air-operated. The Spitfire is designed to use these units after performing minor modification of reversing the air cylinders to the opposite side of the retract unit..." 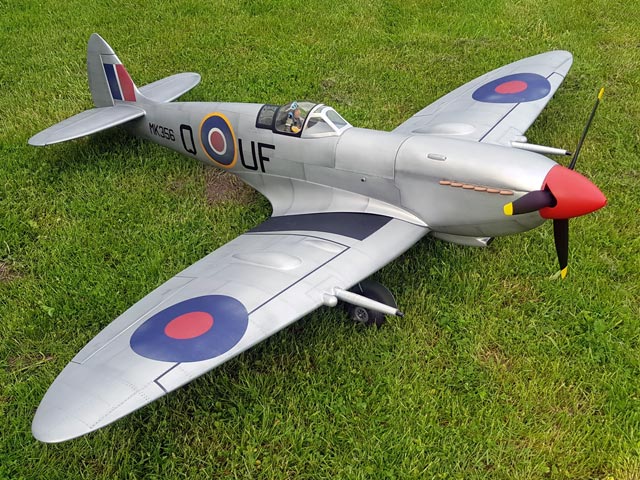 I had been dreaming about it! I knew they were going to upload it, thank you very much for sharing the plane of this wonderful plane! regards! Daniel
Danale17 - 18/08/2021
Hi Steve and Mary, some photos [012-014] of finished models (both are from friends).
Dries - 20/08/2021
Hi ,Last year during lockdown I built this Top Flite Spitfire [pics 015-025]. It was real fun, everything fits together very well. Flies great on 6S electric setup. Finishing and paintwork is copied from the real one, Battle Of Britain Memorial Flight MK356 in 2010. Attached I sent you some pictures of building and flying. Best regards from Belgium,
Tom Lesage - 20/08/2021
Add a comment