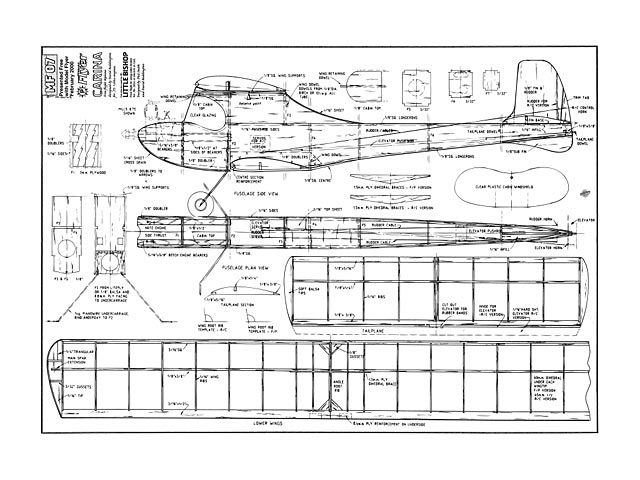 The original FF Cardinal (oz4418) was a Phil Smith design, kitted by Veron in 1951. This here is a much later version with biplane layout, by David Boddington. For Mills 75 diesel and either FF or RC.

Quote: "A Salute To The Veron Cardinal and designer, Phil Smith. We Present The 'Little Bishop', And The 'Carina', A Biplane Version Of The 'Cardinal' For 0.75cc To 1.0cc Engines, Can Be Flown Free Flight Or With Lightweight Radio. David Boddington Rings The Changes.

The ever popular Veron Cardinal (oz4418) a 35 in wing span lightweight power model and its larger brother the Deacon (oz291) at 52 in span, are still available in kit form from regular model suppliers. Initially intended for free flight only, both designs have been successfully converted to radio control using two channel systems, or just rudder only control.

It speaks volumes for the original design qualities that so many Cardinal models can still be seen at model meetings, nearly always performing well and giving their owners a great deal of satisfaction. Incidentally, the kits are still very modestly priced at £18.95 and £27.50 respectively, excellent value indeed.

When the new little 'Bamby', reproduction diesel became available I was wanting to install it in a model for the final test - it had already been bench run.

Two wings on a Cardinal: With the deep fuselage the Cardinal is crying out for a conversion to a biplane ie without changing the basic dimensions of the model. It is only surprising that (as far as I am aware) no one has taken this option over the forty plus years that the Cardinal has been on the market. However, eventually some interfering so-and-so will be unable to avoid the challenge - Boddo, again.

Basically, a lower wing, of small chord and span, is slotted into the underside of the fuselage, behind the undercarriage former and a wing seating doubler glued to the cut-out. This was the only modification carried out at the drawing stage.

As with the Cardinal, the 'Carina' (dictionary definition -a keel shaped structure) can be flown free flight, or with simple lightweight R/C. To check out the design I opted for the free flight version, but I have no doubt that she would perform delightfully with single or two function radio, or even with additional throttle control if you use really small servos such as the Hitec HS50's.

If your idea of R/C flying is to throw the model around a bit, it might be prudent to add a further 1/8 sq hard spar on the top surface of the wing, also to sheet the centre section with 1/32 sheet. For free flight with modest power, I opted for the Mills 0.75 as used in the original Cardinal, for the R/C throttle version the PAW 0.8 to 1.0 cc engines would be fine.

Construction is again straightforward, check on the required spacing of the engine bearers for the engine you are using and adjust, with bearer thickness, accordingly, allowing for right thrust offset.

I cut 0.8mm (1/32 in) rib templates and cut round these for the actual ribs, placed them on a short piece of spare material and block sanded them to ensure they are all the same and nice and smooth. You can use the KK Cardinal kit as the basis for the Carina, it will save you a fair amount of marking and cutting.

Few changes have been made from the original, the wing dihedral braces have been tapered and the rib spacing modified at the root end. You can form the wing tips as originally designed, I did, but it is quite 'fiddly' and using very soft 45° triangular stock makes the the task easier, also for covering.

Bending the undercarriage is easiest carried out by first bending it flat (without the forward rake) and then putting the two legs into the vice and bending the top inverted over with a wooden block. Do remember to sew and epoxy the undercarriage to F2 before joining the fuselage sides. Former F2 can either be from Liteply or 1/8in balsa with a 0.8mm ply reinforcing to the front lower side.

For the R/C version you will need to cut holes in formers F4 to F7 to allow for the control surface linkages from the servos. You should also think in terms of a larger fuel tank for radio flying. A larger rudder is shown on the drawing plus an add-on elevator for R/C work, these will be adequate for normal flying, but could be increased slightly for more adventurous flying.

Because our free flight flying sites are not ideal, trees and bushes abound, I decided to cover the 'Carina' with a 'Tex' covering material, a little over the top perhaps, but thinking back to a previous F/F existence, I often covered small F/F sports models with nylon. Take plenty of care not to allow any warps to creep into the flying surfaces.

As always, the model was built against a deadline -simply because I wanted to include the 'Carina' with the 'Little Bishop' in the same issue of AMI, and the airframe was finished in two days, the model was ready for test flying in three days - including photographs and article! This was personally quite pleasing as the finishing had included doping the engine bay area, covering (with some old stock Polytex) giving it one coat of thin clear dope, masking and spraying on the dark blue colour (Auto spray can) and adding the self-adhesive white trim strip - not too bad for one day's work, for a 'wrinkly'.

I even added a piece of self-adhesive all foil trim around the cockpit glazing on the following morning. the clear plastic windscreen had been glued onto the fuselage with Super Phatic adhesive. Total weight was a modest 11-1/4 oz and the baance point was right on the button, good omens indeed..." 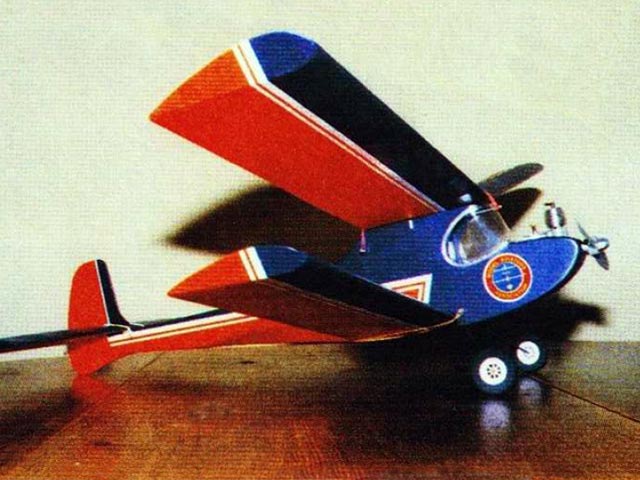 "Basically, a lower wing, of small chord and span, is slotted into the underside of the fuselage, behind the undercarriage former and a wing seating doubler glued to the cut-out. This was the only modification carried out at the drawing stage."
Is the drawing of the lower wing on another sheet ?
Richard Dalby - 22/08/2021
Fair point. I have to admit, I had not noticed there is actually just one wing shown on this plan. It is the lower wing shown. Anyone know what happened to the upper wing? Were builders supposed to have access to the original Veron kit plan, for the top wing?
SteveWMD - 22/08/2021
Steve, you could build both wings on the lower wing layout. Both wings have the same span and rib spacing, and the side view shows the airfoil and spar location. With the trailing edge pinned down the ribs would align with only the leading edge above the layout. Shouldn't be a problem.
Bill Hibbets - 22/08/2021
True, I guess the upper wing is almost the same, just has a wider chord.
SteveWMD - 23/08/2021
The Veron Cardinal plan can be found here, see Cardinal (oz4418).
pmw - 23/08/2021
According to the article text, the lower wing is of a smaller span and chord. The top wing is a standard Cardinal wing.
Pete Theobald - 24/08/2021
Add a comment