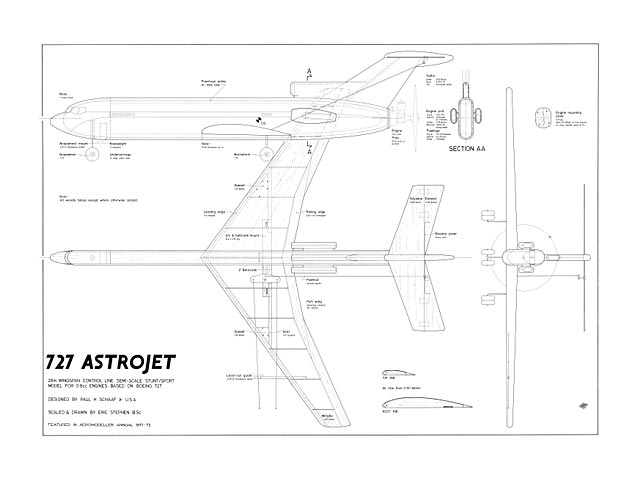 Quote: "Hi, you might be able to use this so here goes. I found this plan in Aeromodeller Annual 1971-72 and decided to draw it up full size. Featured in Model Airplane News May 1969. Designed by Paul H Schaff Jr. Scaled and drawn here by Eric Stephen (me). A few years ago Ronnie Tribe of control line scale fame scaled my plan up again and put an OS 25 LA in the nose. See https://control-line-flying.com/boeing-727-semi-scale/. He had some problems with balance and bellcrank positions which he never really sorted out. Maybe it was just too ambitious scaling it up and making it a tractor type model. Regards, Eric Stephen"

Dad, it'll never fly! Steven, my pride and joy and 10 year old test pilot son, stood next to me hanging over the drawing board viewing my sketches. I had been thinking of developing a model - one somewhat different - one I had not seen before and I had finalized my thoughts on a pusher model of the Astrojet 727. Why not? I asked my young aeronautical engineer. Elementary Dad, how will you balance with the motor in the rear, how about the prop blasting off the elevator, how about the lift of the swept back wings. Well son, tell you what we're going to do - let's build a crude prototype to test our ideas and then if we can get it to work, we'll build our actual model. OK Dad, but it won't work! Well, we did and it didn't.

Before we get on with the construction article, let me briefly relate what happened on the 1st prototype flight and our reactions to show once again that original design is 10% inspiration and 90% of you know what.

On the 1st flight with the .049 Cox singing and with a pusher prop, the plane picked up speed quickly and after about 1/2 lap, I gave up-elevator. The plane tilted back on its rear wheels but did not lift off the ground. At that moment, the prop hit the ground and started running backwards. Naturally, the plane stopped its forward motion and started moving backwards also. The prop hit something again, reversed its direction, and suddenly the plane was rolling forward again. On giving up once again, the plane tilted back, the prop hit the ground again - it reversed direction and started moving backwards again. The engine then stopped. As I walked over to the plane, deep in thought I heard clearly from the side lines: Dad, you designed a horizontal yo-yo.

Not to belabor this point, I made the following changes to the prototype and from then on, all worked well:

1. I increased wing area and made a Clark Y airfoil for more lift.
2. I lengthened the landing gear so I could give up without the prop hitting the ground.
3. I adjusted the balance by adding weights to the front so the plane just balanced on its 3 wheels with full gas tank. If tail was tapped lightly, plane would pivot back until the engine rested on the ground with nose in air. This appeared to be the best trim point for good flight, also for the final model.

One other point - a profile design would leave a lot to be desired, appearance wise and I felt a full scale body was too much work. I compromised on a semi-full size fuselage, which I believe worked out fairly well. Now to the construction.

Fuselage: From the plans, you will see that the fuselage is made of 1/2 in sheet for the side panels connected at top & bottom by balsa blocks 1/2 x 1 in that are contoured round, then hollowed out to 1/8 wall. The forward part of the fuselage has a 1 in wide by 6 in long solid balsa block between the 1/2 in side panels. This not only gives us weight in the front to counteract part of the engine weight in the rear but also supplies a good support for the front landing gear and a solid foundation for adding the extra weight required to balance the plane..." 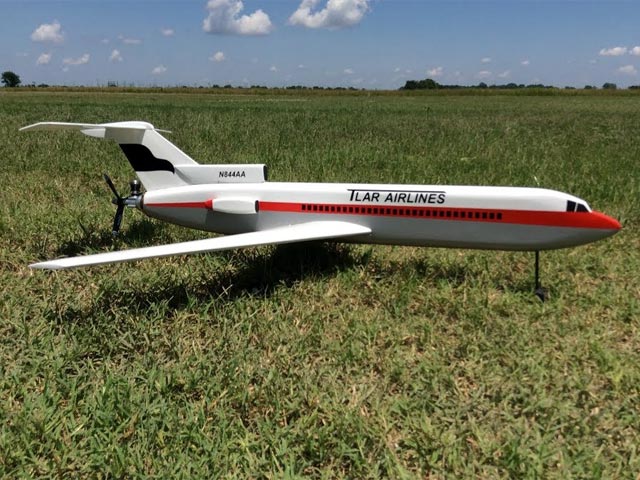