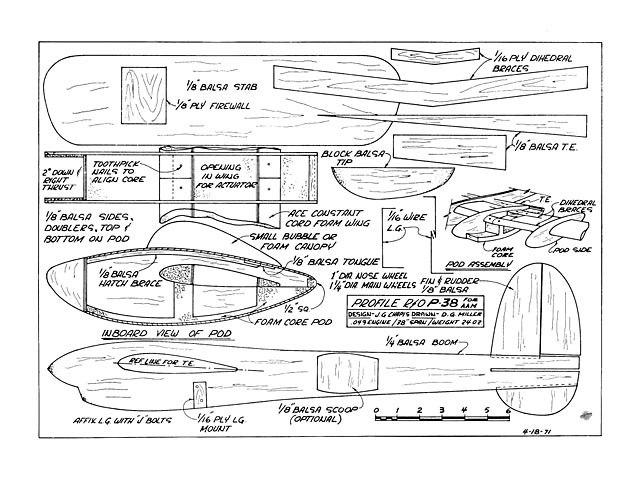 P-38 Lightning. Radio control cartoon-scale model. Uses a foam wing, profile booms and a single prop in the nose. Wingspan 38 in, for .049 engine and rudder only.

Note this design uses the Ace Mini foam wing. No wing parts or layout are shown.

Quote: "Who says a Lightning must have two engines? Foam-winged fighter uses unique fuselage and center wing assembly. P-38 for rudder only.

Like most fellows who have attended college, time for modeling was limited because of girls, student activities and homework, but not particularly in that order. The perfect excuse for working on a model was to use it to illustrate methods of fabrication for my Production Control class.

As I began to study the objectives my instructor had outlined, I found that research and paper preparations would limit the fabrication time needed to develop a display. Solution to the problem—good old foam. Why mess with cutting ribs? After looking at the situation more closely I decided to build a foam core instead.

I was all set to begin except for one thing - I didn't have any idea of what design to build. After going through a stack of old magazines, I came across an interesting scale P-38 RC bird. I figured I'd been different in my ideas this far, so why not go all the way? After studying this design I ruled out the twin-engine idea but not the P-38 design. I decided there wasn't any need in forming booms when using a single engine in the nose, consequently profile booms were selected.

I had an Adams actuator, an extra 049 and a few handy rules of thumb. I put them all on paper and formulated a 38 inch P-38-looking RO pulse bird. In one evening the parts were fabricated, and with another three evenings of spare time the structure was completed. However, it was not until a year later that the design was first flown. I felt that the simplicity of construction and ease of flying would make it an ideal model for a beginner. It also had a certain amount of appeal because of the scale-like appearance, not like the typical 'box type' trainer.

After sending information about the design to the editor of this magazine, it was felt that the model would be of interest to RO fliers. At that time, Ed Sweeney suggested that possibly one of the new Ace Mini foam wings could be adapted to the design, making it easier for those not equipped or those not experienced in cutting foam wings. Thus the P-38 was modified for use with a straight set of Ace foam wings. The only two modifications were the addition of a trailing edge for increasing the wing area and the addition of wing tips.

Construction: Before proceeding with the construction of this model it would be wise to cut out all parts. Assembly is much like that of a dime store glider. If five-minute epoxy is used, this model could be completed in one evening.

Prepare the wings, per instructions included in the Ace package, before joining them. After this is completed, join wing halves making sure that you cut out a 1 x 3 in section on either side of center, between dihedral braces for the actuator. The foam core of the fuselage should now be epoxied in place, making sure to align it properly. After it has dried, install fuselage sides, firewall, and nose doublers. While all this is drying, set it aside and construct the hatch, install the styrofoam canopy and cut the bottom planking. Install 1/2 in square tail block and bottom planking.

The booms can be added, but not glued to the stab until they are aligned. After this dries, glue booms to the wings with epoxy, Then epoxy the trailing edge and tips into place. The rudders and fins should be hinged in preparation for installation. After they have dried, add the rudders and sub-rudders, Then add the landing gear and the structure is complete.

Finish the wings as recommended by Ace. Dope the balsa portions as you would normally, being careful not to get dope on the styrofoam. The original was finished with olive drab upper section and gray underside. The second was finished like a Reno air racer.

Flying is a breeze. Make sure to put in a 2-degree down and 2-degree side thrust - also radio equipment. Start the engine and up, up and away. Flying characteristics are much like that of the 1/2A Skylane (oz868) by Carl Goldberg."

Quote: "Steve, Mary, Please find attached a plan and article for a single channel P-38 published in America Aircraft Modeler by John Chapis in January 1972. I don’t have the article from the magazine, but an article from the ACE newsletter from that time explaining the linkage for the twin rudders. I never built it but thought you might want to add it to your site. Thanks for Outerzone, what a great resource." 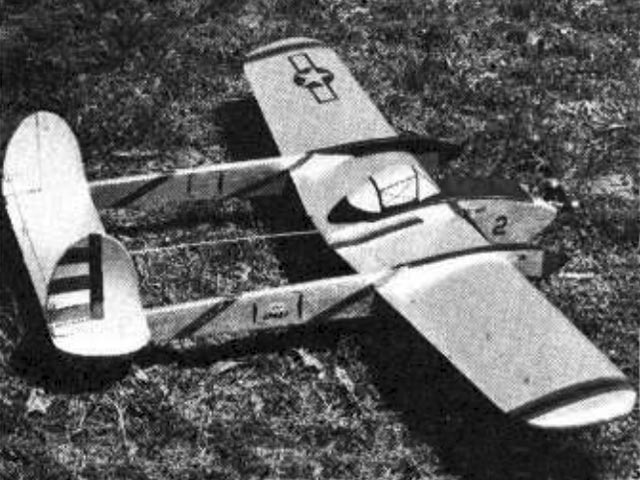 How can you call this scale?
Ted Avey - 16/08/2021
It's a fair question. The Scale tag here on Oz is tied to the ScaleType function (for searching by type), so it's wider than old-time CL scale/stunt thinking. For me, I am interested in how people using Oz can find a plan - the plan they want. The worst case is people don't find it, at all, because we have been too restrictive in the tagging. The next worse case - so slightly less bad - is they find, say, 21 models of the P-38 by looking say here at https://outerzone.co.uk/search/results.asp?keyword=typeID:1059 and then they can choose to ignore the ones that don't appeal to them, because of insufficient scale fidelity. That comes down to personal choice.
SteveWMD - 16/08/2021
Add a comment