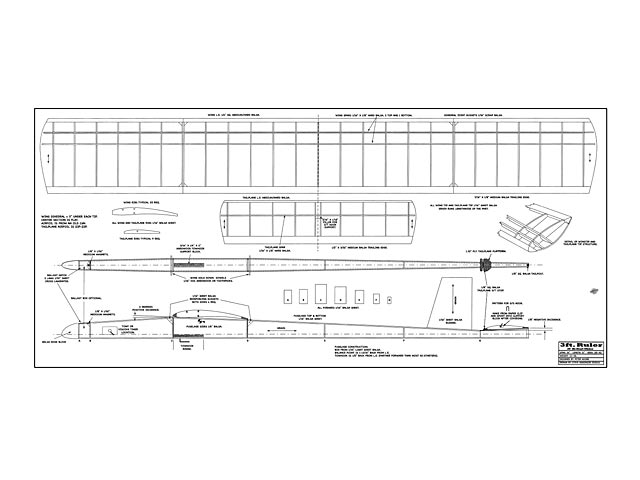 Quote: "Three Foot Ruler, by Peter Michel. So, who's up for introducing the new/old class of 36 inch Hi-Start Glider competitions at the major venues in the US? Well, the boys at Peterborough MFC have had a leg up on the Americans for over a year now and this new class is continuing to gain momentum. Hello America, are you listening?

SUDDENLY, we have a nice new contest class for gliders - new, that is to the UK competition calendar but as old as model glider-flying itself. The new class is called 36 inch Hi-Start and it is tailor-made for those who love those lovely old designs from the early AeroModeller and Model Aircraft era or those who perhaps thought that towing 'em up was a thing of the past.

Launching is by a user-friendly 30m bungee - 25 per cent of it thin rubber strip, 75 per cent line - so everything is nice and slow and you don't have to run. What else do you have to know? The wingspan of these mini-bungee models must not exceed 36 in. Designs are from the Vintage or Classic periods. And that, my friends, is basically it.

The vintage organisation SAM 1066 has found slots for three, 36 in Hi-Start contests at Middle Wallop this season, on May 5, September 21 and December 1. Peterborough MFC, which led the way in promoting the class, will be staging a similar event, with original-designs permitted, at their Flying Aces meeting in September.

First, a bit of history: Hi-Start launching seems to have found its way into the United States from Germany sometime in the 1930s when it established itself at New York's Central Park. The legendary American modeller and writer Frank Zaic, described it in his book 'Model Glider Design' of 1944. Zaic included a sketch of the action [right] and his comments are valid to this day, instantly dismissing the idea that Hi-Start is a form of high-speed zoom launch:

By using light rubber, wrote Zaic, the tow is fairly slow and the glider has no trouble in reaching altitudes equal to the length of the string - by which he obviously meant the total length of the bungee. Zaic and his pals used 25-ft. of rubber and 75-ft. of line which, in metric form, is the Peterborough formula - a nice link with how it all started.

I lay no claim to being an expert in bungee flying, but I have built a number of Hi-Start gliders since May last year, including a scaled-down Lulu and an original-design, the 3ft Ruler - an optimistic title since at the time of writing it has yet to be flown in a contest. I might add that since writing on the subject in SAM 35 Speaks magazine, I have received more queries about the class than any other aspect of vintage or classic gliders.

These small bungee gliders not only look cute, but survive the natural hazards of free-flight remarkably well. They are light at 3 or 4oz. and therefore bounce well. There is a built-in safety factor of the stretchy line, also. All of which means that there is little need to beef anything up. After all, nobody would fly one of these little darlings for choice in a howling gale. But if you had to, in a contest, what would be likely to snap first - your wing's tough main spar or the flimsy strip of 1/8 in flat rubber in the bungee line? If in doubt though, do fit a spruce main spar, but in my experience hard, springy balsa is quite strong enough.

The Peterborough boys have found that auto-rudders are not needed because these small models obligingly find their own circular flight path. The jury is still out on this one. The optimum circle diameter will vary from model to model, but the old rule applies here: If the wings are level during the turn, all is well.

The tow-hook position is generally the same as for conventional towing - on a line projected 20 deg. forward and down from the CG, or balance point. No CG on the plan? Try 50-55 per cent. But always fit a variable hook position to be on the safe side. On the 3ft Ruler, for instance, the hook ended up much farther forward than I would ever have expected..." 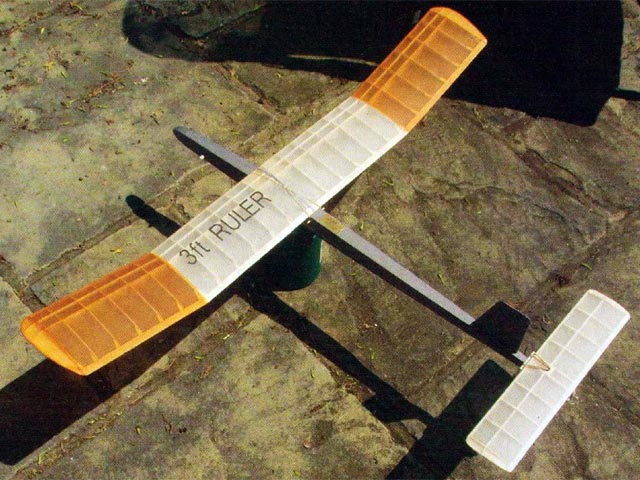