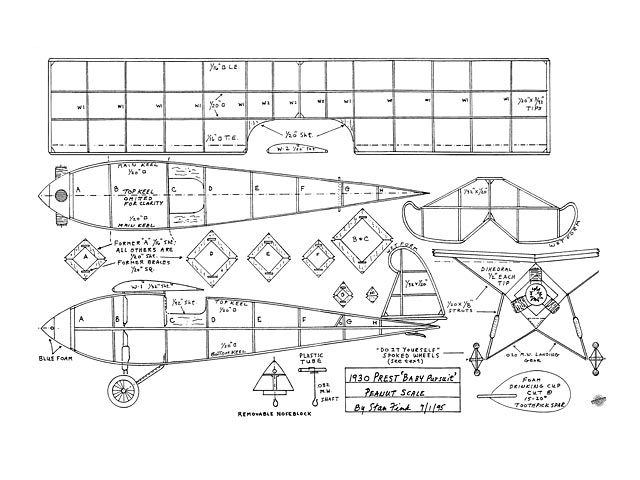 Quote: "One of the many 'flivver' lightplanes born during the Great Depression, the unique Baby Pursuit is all but forgotten today. This clipped-wing 'speed' version is a bit of a challenge to build and makes a great flying Peanut.

Clarence O Prest was one of the many bit players on the great stage of the Golden Age of Aviation; he had his 20 minutes of fame and disappeared. His aviation company, based in Southern California, may have lasted only four years, from 1927-1931, but during that brief time he obtained patents on his unusual diamond-shaped fuselages and managed to break the world's speed record for light aircraft. The purpose of the diamond-shaped fuselage was to minimize visual obstructions for the pilot in all directions and to aid airflow around the fuselage, resulting in high performance with minimum power.

Although only a handful of Prest Baby Pursuits were produced, at least one, N 17308, survived in airworthy condition and was seen at EAA fly-ins until it crashed in 1958. It was seen again in 1965, almost 35 years since the tiny company went broke.

As a model, the clipped-wing Baby Pursuit makes an excellent subject for a Peanut. The only modifications I made are a slight dihedral in the wing and enlargement of the tail surfaces. According to Aviation magazine for August 10, 1929, the only factory authorized color scheme was a black fuselage with silver wings and stab. The rudder was black with silver numbers and there were black numbers on the wings. All struts were black and the cowl forward of the wing was silver.

CONSTRUCTION. Fuselage: I always start with the fuselage and in the case of the Prest, it's also the only unusual part of the project. This was my first diamond, so I took some extra precautions to make sure it came out true.

I chose to use 1/16 x 3/16 formers instead of cross-sticks to ensure capturing the correct shape of the compound curves. Although this adds a little more work and weight, the uncovered airframe still weighs only 4 grams with solid balsa wheels.

This construction method is similar to the half-shell keel-and-former method used on WWII-era models, but you must start with the top, not the side view, First, lay out the two longerons over the top view using flexible but strong wood, pin down and wet thoroughly with a Q-tip. The wet wood will set the extreme curve. If you want to save weight on the formers, use 5-6 pound 1/16 x 1/8 sticks stripped from light C-grain sheet. Make the formers by gluing two sticks to the correct angle by laying them over the former patterns on the plan.

After the two side longerons are dry but while they are still pinned to the board, glue the top half of each former A-H in place. Notches are optional; I decided against using notches and filled in the gaps later with 1/20 square scraps. Make sure the formers are absolutely perpendicular to the building board..." 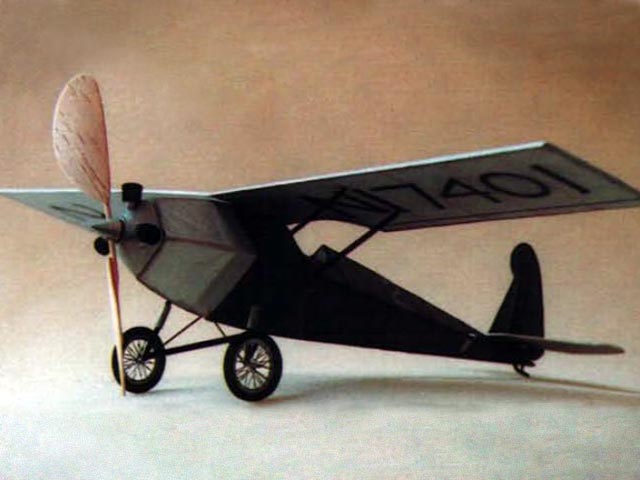