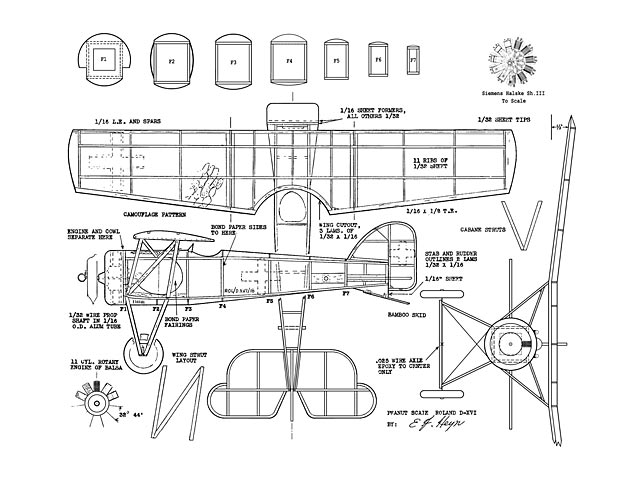 Quote: "Before building this Peanut, make yourself a sign that says: No, it's not a Fokker D.VIII. Otherwise, the judges might downgrade you for the wrong tail outlines! Camouflage technique is clever.

Picture a half-dozen daring but tense pilots holding their fully wound quivering stick-and-tissue creations in sweaty hands, awaiting the launch signal. Now! Six little WW-I Peanuts grab for altitude with near misses and an occasional midair collision. Last man down is the winner and gets into the next round. Exciting? You bet! That's WW-I Peanut Combat at the Glastonbury Modelers (Conn.) meets. In looking for a model other than the usual Fokkers, SE-5's, Nieuports, etc., I came across this little jewel. The rarer little known aircraft types have always initiated massive doses of rubber lube surging through my aging veins and this Iittle monoplane fighter is no exception. As it turns out, it is also doing quite well in regular Peanut events.

The Roland D.XVI was the next to last fighter type to be developed by L.F.G. prior to the 1918 Armistice. The L.F.G. Company (Luftfahrzeug Gesellschaft) was established in 1912 to construct non-rigid Parseval airships, but upon the outbreak of war in 1914, turned to the development of military aircraft. L.F.G., in order to avoid confusion with the L.V.G. Company, produced their aircraft under the tradename 'Roland.' Although best known for the types which achieved substantial production runs, such as the D.I to D.III, C.II and D.VIb, many other experimental types of monoplane, biplane and triplane configurations were developed. How much influence the successful Fokker D.VII had upon the D.XVI is, of course, guesswork, but there is a general resemblance. I have been unable to determine how many were actually produced and apparently no factory drawings have survived. Photos and data in various books and magazines, as well as plans by Bob Holman and Gordon Codding were used to create this Peanut version. Bob Holman has plans available in larger 3/4 inch and 1 inch scales. Two different rotary engines were used in this aircraft; the 170 hp. Goebel III and the 160 hp. Siemans-Halske Sh.II. I chose the latter, as there are excellent detail drawings of this engine presented in "Scale Models by Wylam, Book III."

I must admit that this was a fun plane to build and fly, even though I am admittedly one of 'them-there biplane nuts.' The fuselage is the usual square box of 1/16th, sq. balsa. Note that there are no top or bottom stringers, the shape being maintained by the curved bond paper decking. Make small square cutouts in the decking at the strut locations to allow the cabane struts to be glued directly to the top longerons. All struts were made of basswood strip and were secured in place with 5 min. epoxy. Make left and right 'N' struts and assemble the upper vee struts before installation, so there will be fewer pieces to handle. Paint with Floquil Dark Green model RR paint and set aside. Cover the rear of the fuselage with white tissue and add the paper side cowl cheeks. To simulate the clear varnished, all plywood fuselage of the prototype, I used a small piece of soft rag and rubbed the fuselage all over after shrinking, but before doping, with Glid-Tone #246 Wheat wood wipe-in stain. The nose plug/cowl support former, engine and cowl are removable and will stay with the prop for winding. With a little extra work, the engine could be made to rotate with the prop however, in Peanut size, there could be a weight penalty.

Fortunately, I had the foresight back in '39 or so to put away in the scrap-box some small spun aluminum cowlings which were than a common hobby shop item. Assuming that you would probably not have a comparable cowl handy, I would suggest the turning of a hardwood master, and either heat or vacuum forming a cowl of .010 or .015 sheet butyrate plastic. You can, of course, carve the cowl from a block of medium hard balsa. Paint the cowl the same as the struts or conjure up your favorite color. Engine details are on the plan. Some photos show a balsa prop, but this was replaced with a heavier Williams Bros. prop to add nose weight. Prop was later painted with Flat Brown Testors plastic paint.

Cut patterns for the stab, elevator and rudder laminations. My favorite form is of Bainbridge board, with the edges lightly waxed to prevent sticking. Assemble stab and rudder as per plan. Cover rudder with white tissue. My insignia was modified from that in a Guillows 18 inch D.VIII kit, but may be cut from SIG's black decal sheet. Make one master wing rib template of 1/16th ply to cut all ribs. Maintain the nose contour and trim for the taper from the trailing edge. Block up the center of the laminated circular wing cut-out 3/16 in, and trim center rib to fit.

Perhaps the most time consuming part of building this model is the application of the polygonal camouflage pattern on the upper and lower surfaces of the wing and stab. A reasonable substitute for camouflage would be to cover the top surfaces in green tissue and the bottoms with light blue. My process is as follows. Make a frame of scrap wood approximately 12 by 15 inches and dope on a piece of SIG's lightweight tissue. Dissolve some blue food coloring in alcohol and spray. When paper is dry, remove and dope on a second piece. Spray this with alcohol in which a few drops of Burnt Umber oil mixing color has been dissolved. This should give a light tan effect which is used as the base camouflage color on top of the wing and stab. Bottom surfaces are covered with the blue tissue. Use felt tip marking pens of several colors to apply the pattern. If any spot becomes too soggy stop, let dry and come back to it. This is not super scale, so I eyeballed the shape of each patch of color. Finish off the job with one coat of clear nitrate dope. Although somewhat tedious, the results just might stagger the competition and bring forth cries of amazement from the local spectators.

Next add the landing gear and the cabane struts. Cut a temporary spacer of scrap wood to fit between the top decking and the bottom of the wing to obtain the proper incidence, and glue wing to top of cabane. Add tail surfaces.

Without any ballast or thrust adjustments, my prototype flew left-left with a steep left-hand climbing turn and a gentle rollout. There is quite a bit of initial torque and you might have to launch with the right wing slightly down. Power is one loop of 4 or 6 mm rubber. With lower power and less resulting speed, I found this plane somewhat difficult to trim indoors. I recommend outdoor flying."

Quote: "LFG Roland D.XVI; Peanut scale plan by Ed F. Heyn from the December, 1975 issue of Model Builder. Modifications to the original plan include equalization of the horizontal stabilizer, a complete redraw of the front elevation, the addition of formers and a scale illustration of the Siemens Halske rotary engine. Best regards," 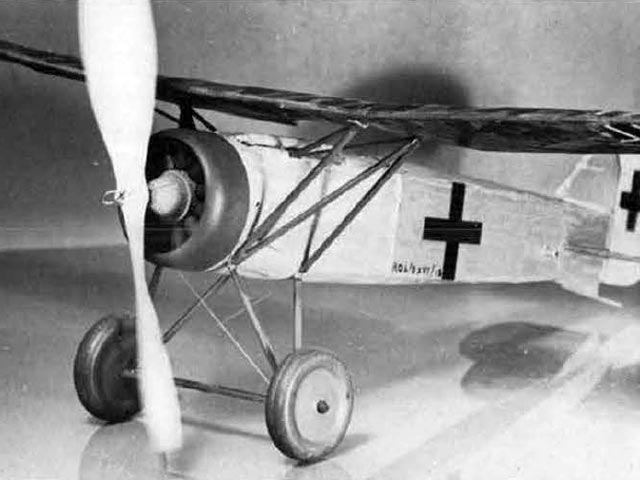 It has to be spelled "Luftfahrzeug Gesellschaft"
Andreas Lacher - 06/08/2021
Thanks. Have fixed the spelling as quoted on this page now. This body text is of course just a quote from the article page as printed in the magazine, back in 1975. We can't fix all of history :)
SteveWMD - 06/08/2021
Add a comment