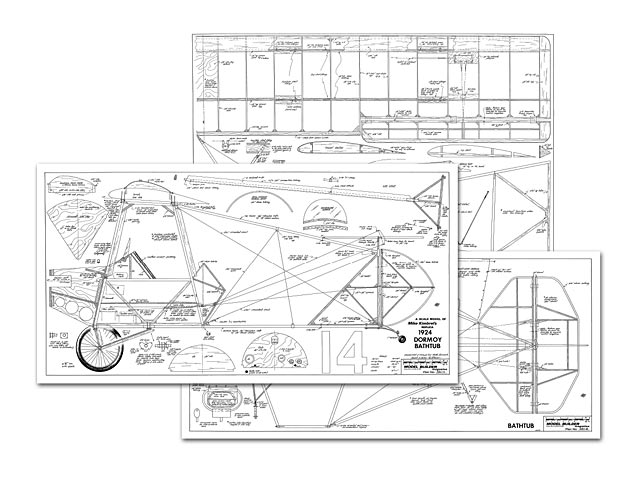 Quote: "Giant Scale at its very best! This 1/3 exact scale replica of Mike Kimbrel's VW-powered homebuilt captures all of the flavor of the original 1924 machine, and doesn't need a monster chainsaw engine up front to fly in a realistic manner.

At the outset, let it be clear that this is a model of a replica. The plane that I present here is a model of Mike Kimbrel's replica of the 1924 Dormoy Bathtub. Although it may seem strange to model a replica, rather than the original, there are a number of practical reasons for this.

First, there is the problem of documentation in the event the plane were to be entered into competition. Second, and related to the first reason, is the unavailability and lack of structural information on the subject to be modeled. The information available on the original 1924 Dormoy Bathtub is a bit sketchy, sufficiently so that most competition oriented scale builders would shy away from it because of the difficulty in documentation. Oh, there are three-views and a few black and white photos around, but certainly not the abundance of material needed (and in most cases required) in today's competition in Precision or Sport Scale.

But since Mike took this sketchy information and converted it into substance, complete with many available photos and complete sets of construction drawings, we now have a subject which can be authenticated to the nth degree, while still capturing all of the flavor and character of the original. Make sense?

It would seem that with today's great push into the building of full-scale replicas, we are opening many new vistas for the scale modeler. Of course, it does depend somewhat on how close to authentic-looking the replica is built, as some subjects I have seen lose something in the translation, but these appear to be in the minority.

Like many modelers, those with a bent toward scale in particular, I cannot look at an aircraft or picture thereof without envisioning it as a model. There is almost an inate sequence of assessments and calculations that run through my mind as I look through various books and publications. Wing shape and number, general configuration relative to ease of duplication, and moments and proportions are considered along with numerous other trivia. In the event most of the above comes out favorably, the subject is mentally filed as a possible.

Then there are the times, such as when I first saw the pictures of Mike's Tub in the September 1978 issue of Sport Aviation, when all reason leaves. You are smitten and the plane has to be built, no question. The subject may or may not be a good subject from the standpoint of competition, but then a vast number of scalers don't enter competition anyway, but work for their own inner satisfaction.

Be aware from the start, that although this looks like a rather simple craft, it is not. In its own way, it is one of the most complex subjects that I have ever built. A redeeming fact is that we are working in such a large scale, that 90% of the plane is simply a reduced size duplication of the full-scale. The remaining 10%, which is predominately the front section containing the powerplant, are minor concessions to the fact that this is a model.

Many construction articles can incorporate the phrase 'Construction is rather straightforward, embodying only basic model fabrication techniques.' In this instance, we have anything but the usual, and as such, I recommend the plane only to those who are either well skilled in scale model construction, or who want a strong challenge to their developing skills.

The following text will only attempt to explain some of the major construction sequences and unusual details, and is certainly not a step-by-step type of chronicle. There are many areas where an alternate method or approach is possible, and I am sure some builders may favor their own methodology over my selections. It is my experience that no two scale builders will use all the same techniques for solving the various facets of construction. So do your own thing in areas where you disagree with my thinking.

If you are going to build this model. begin as I did, by acquiring the following items, sources for which are listed at the end of this article. Get a copy for two) of the September 1978 issue of Sport Aviation. Then procure a set of Mike Kimbrel's drawings for the full-scale airplane. They are inexpensive, complete, and will answer many perplexing small questions which may not be immediately clear from my plans or text. Purchase a set of 6-5/8 inch wire wheels. Once having these, you will not be satisfied with just fondling them, but will want to see them affixed to the finished work..." 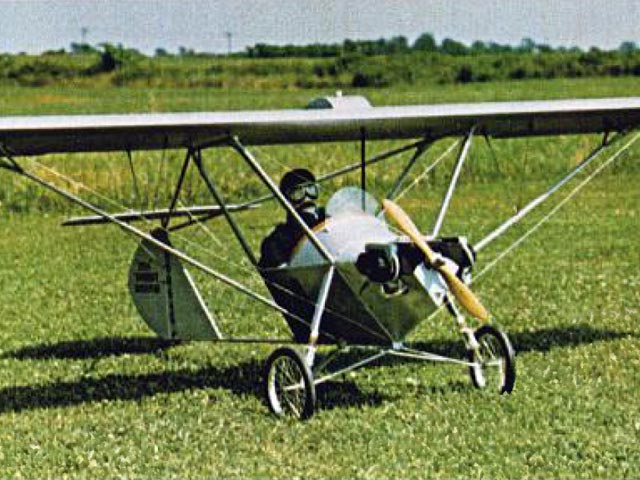