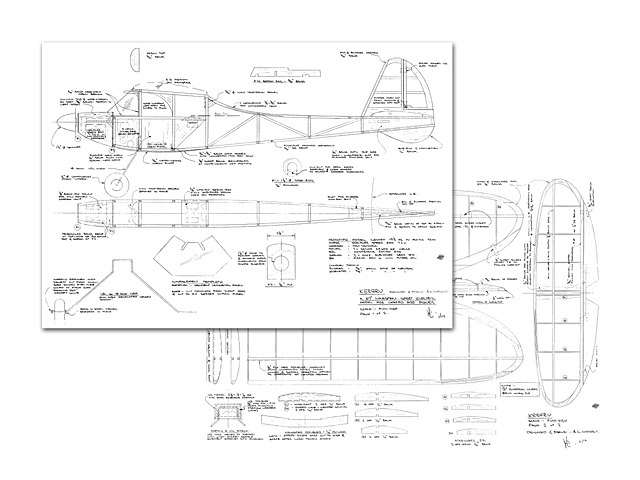 Note this plan consists of the original pencil drawings by Alan Wooster, submitted to Outerzone directly by the designer, himself. This design also later appeared in RCMW, Jan 2003.

Quote: "Hi Steve, Just back from the copy shop. Please find attached A1 scans being plans for my 'Kereru' model.

An amusing story around this model. I had three 'sort-of-similar' models sitting on the garage floor at home being photographed for RCMW when friend, (late) Brian Borland, CEO of Airsail models in Auckland called in. He was impressed with these models and grabbed one despite my protestation that it was spoken for. That model was later kitted by Airsail as 'Voltimer'. He never even gave me a kit! But then I never paid for any model supplies from Airsail after that either .... (I do still have my original plan). This 'Kereru' was then hurriedly designed and built to meet the RCMW deadline. The prototype was later sold off as a birthday present for a young newbie to modelling and he was delighted with it. This model is still one of my favourites; for years I have been intending to build another, but never quite managed to fit it in. Cheers, Alan"

Quote: "A simple to build 47 in span sport model for 400 electric power and 3 function R/C. This model was designed following my previous introduction into small electric models. I considered something with elliptical flying surfaces would be a little more attractive, and made some changes to the fuselage profile to more a little away from the previous vintage-style look.

I am delighted with the results; the construction is straightforward and simple. The name was borrowed from a New Zealand native pigeon - pretty to look at and absolutely without guile. Prototype performance can only be described as docile when fitted with a Multiplex 400 6v motor driving a 8 x 4 wooden electric 'Master' prop via a Mini-Olympus gearbox. The electronic speed controller (ESC) is a Kontronik Rondo 400 soldered to the back of the motor, and all powered with a home-made pack of 7 Sanyo KR 500AE cells - all readily available and inexpensive hardware. I usually hand-launch these lightly loaded models, but it will ROG from short-mowed grass with ease. All-up weight of the prototype is 20-1/2 oz.

Construction Notes: This model utilises time-honoured construction methods for lightweight models assembled primarily from balsa sticks with a little plywood in places. The wing is built up as three separate panels each assembled over the plan on a flat building-board. Both wing and stabiliser use a flat-bottom airfoil for ease.

The fuselage is assembled from balsa sticks with 1/16 balsa infill reinforcing around the nose area and the flying surfaces are covered with translucent Solarfilm and the fuselage was covered with some leftover metallic blue Monocote.

The cabin side windows are left open for a combination of access to plug connections and cooling; this arrangement works well.

I general I use aliphatic glue for most construction with some 30 minute epoxy in strategic locations such as for motor-mounts and UC installation... " 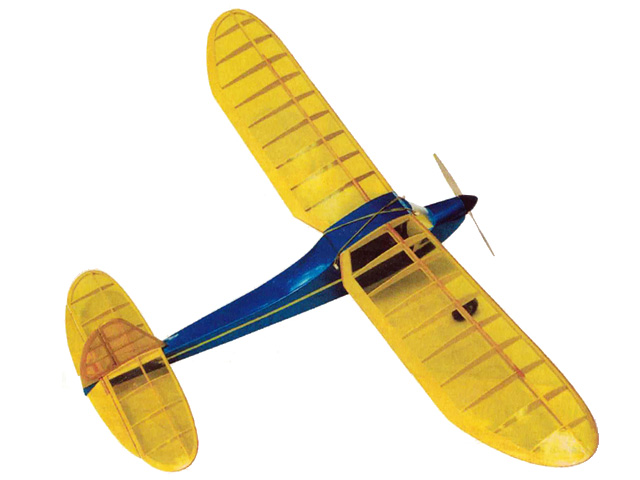 What a pretty revivalist design! Funny story too! It looks good, ergo it should fly good!*
* with apologies to English grammar :-)
Miguel - 29/07/2021
Hey Alan, I've got a Voltimer kit in the stash... just waiting for a clear board and the right moment - thanks for reminding me it's sitting there! :-) Cheers. Jerry in Oz.
Jerry Cashman - 30/07/2021
I have built one and it flew very well and was great fun.
Kereu is a sea bird here in NZ. Simple to construct---
light wind only hence my fly-away
Jon Borrette - 03/09/2021
Add a comment