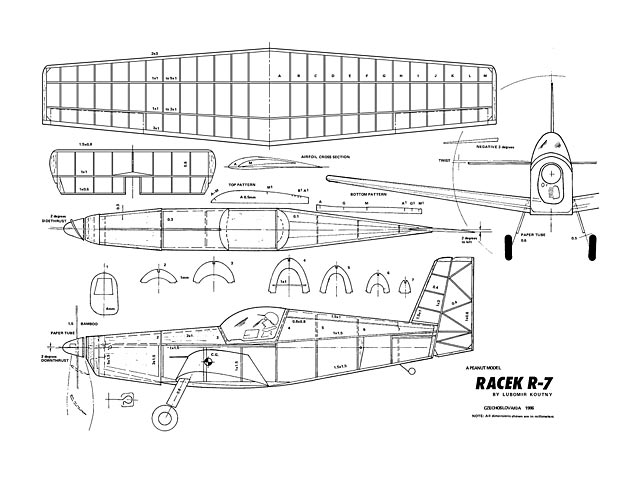 Quote: "This Czechoslovakian import is a Peanut Scale replica of an aerobatic aircraft that didn't get beyond the first prototype. As a model, it is a great flyer; 70-second flights indoors are possible.

The winners of the First World Aerobatic Championships all flew ZLlN-26 trainers; these planes were merely modified versions of the normal flying school trainers only.

A new, special aerobatic plane, the Racek R-7, designed by Z Rublic made its official roll-out on March 7, 1964. The experimental workshop of Brno-Melanky had made a very fine ship; Rublic used all wood construction and the same airfoil he used on his famous M-1D Sokol, powered by an inline Waiter Minor 6-111 160 hp engine, and a constant-speed VSOOs propeller.

The new plane was a better trainer in most respects from the Zlin, but there was no interest shown and the Racek never got beyond the first models.

Building the Racek: Our system of building the peanut version of the Racek is very much like the full-scale plane, and isn't very complicated.

Wing: We use light, but strong balsa and very light glue; I use Czech Kanagom glue thinned one to one. The ribs are cut from 1/32 balsa, using the aluminum pattern as shown on the plan.

Rudder and Elevator: Both the rudder and elevator are built on the plan.

Fuselage: Both sides of the fuselage are built on the plan as a basic box. Glue the half-formers in place, then glue sheeting over them to form cowl and area behind canopy. Make an instrument panel and glue to former 3, and make pilot figure from styrofoam or soft balsa and glue in place in cockpit. Canopy is molded from .15mm celluloid and glued over cockpit.

Prop: Make the propeller from hard balsa, 1.5mm thick. Blades are formed on a hot, flat iron. The blade joiners are made from 1.5mm bamboo and glued to the spinner. Or, to simplify the system, a plastic prop can be used...

Motor Hook: Use .5mm steel wire (music wire) for the motor hook, formed on the plan pattern. It is wise to use a bit of plastic tubing over the hook to save your rubber from damage.

Nose Block: This part is made from light balsa, with the radial bearing from 1mm plywood. Prop shaft must go 3 degrees down, and 1 degree to the right for proper flight.

Covering: Modelspan or thin Japanese tissue is best for this model. I used white modelspan, and colored it with blue as on the original craft. The color scheme on the final version of the R-7 was red, white, and blue stripes with black trim in front of the canopy. The wing was blue on top, and red on bottom. Other color schemes included all white, with green on cowl, during its initial testing at the Brno-Slatina airfield. When Mr. Souc was training in the R-7 for the Magneburg Championships, the colors were all-yellow, with cowl in red, the prop silver with red edges and blue spinner.

Rubber: I used my best orange Pirelli rubber, weighing 1.2 grams. Maximum turns were 1800, when the rubber was new. You must find the best rubber and prop pitch you can for contest flying.

Flying: The Racek is an excellent flyer. It doesn't have any problems when all is in accordance with theplan. Look at the downthrust, rudder, CG, etc, once more before you test fly to be sure everything is proper.

The best contest flights I obtained were 70 seconds in a Prague hall 30 feet high, on 1400 winds of the motor. It can fly in a small space, because its turning diameter is small. But in a larger space you can increase the flying circle, and the Racek will climb, giving you longer flying time. I am sincerely hoping that you are finding this an enjoyable project. Good luck."

Quote: "Peanut scale Rublic R-7 Racek (Seagull) by Lubomir Koutny from the November, 1986 issue of Model Builder. This is definitely not a beginner's model - the wing is comprised of twenty four ribs and four spars, resulting in a complicated build. Plan features completely redrawn wings and horizontal stabilizer. Regards," 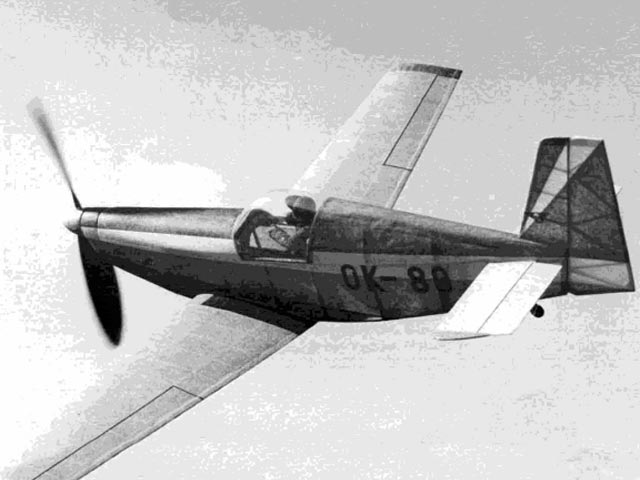 Thank you for another gem. The article seems to be incomplete, though
Hubert - 26/07/2021
Looking at this, I think the issue is most people are using Roland's magazine scans of MB magazine, I mean the scans from from Digitek. And that collection seems to be missing (at least) the next page #54. Anyone out there got the actual Nov 86 magazine to hand?
SteveWMD - 26/07/2021
I'm sorry, but the article does end rather abruptly with no continuation. Pages 54 and 55 comprise the center-spread containing the plan, itself. Page 56 begins the monthly feature "Hannan's Hanger". For those interested in building scale, I have an article on the original aircraft from "Modelar" magazine along with a translation of same. Please voice your interest and I would be happy to submit it.
Jan Novick - 26/07/2021
It's actually farther back in the magazine--they did not have a "continued on pgXXX" note. It is actually continued on pg79-80 of the magazine. I am emailing those pages to you Steve.
Dave D - 26/07/2021
Got it now, thanks to DaveD.
SteveWMD - 26/07/2021
My apologies, I completely missed the continuation towards the back of the magazine. I will re-compile article, complete this time, and a transcript.
Jan Novick - 27/07/2021
Please excuse my ignorance, but what are these Roland and Digitek scans mentioned in comment no.2? My MB e-collection is mostly based on HLSAT's at RCBookCase but these have a large gap in the mid-eighties.
Miguel - 27/07/2021
For Digitek, see: https://www.digitekbooks.com/magazines/ they will sell you a flashdrive of all MB issues (all pages, ever) for $75. But the scanning is not very high res, only 300 dpi greyscale, and the plans as printed on the pages are thus too blurry to enlarge - unless they are peanut scale plans of course. Useful for magazine articles and everything else, though. You will recognise the style of the scanning, after a while. There is often a kind of vertical grey striping down the pages, and low contrast. Most likely Digitek is the source of all the hlsat files.
SteveWMD - 27/07/2021
Well, those magazines had to come from somewhere. As Antoine Lavoisier (18th C., France) wrote, "In Nature, nothing is lost, nothing is created, everything is transformed." :-) Thanks, Steve!
Miguel - 28/07/2021
Add a comment