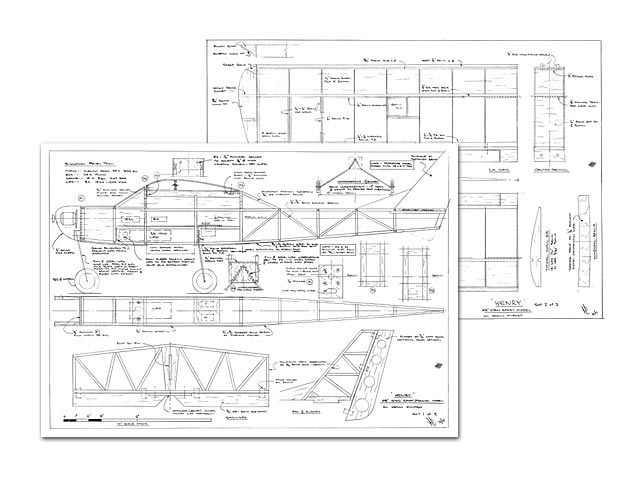 Quote: "Here is my design, the 'Henry'. I named it for a newbie modeller friend in UK who was just getting started in building and flying. I designed as a basic 4-function r/c trainer and it turned out even better than I expected, (he states modestly) - truly the best flying trainer I have flown. As an exercise for my own benefit, I then duplicated the model completely in depron. It was similar finished weight and flew just as well. I mounted that one on floats [see pic 006] and flew it off water for most of its time with me before selling it. I still have the original film covered prototype maintained in flying condition but haven't flown it in several years. By chance I happened across the two sheets of drawings, saved in PDF format, I prepared for this model..."

Quote: "Around Xmas 2014 I received an email out of the blue from a fellow in UK, I'm in Australia. His name was Henry. He stated that he was interested in building an r/c model aircraft and learning to fly and was enquiring whether one of my recently published plans may be a suitable place to start. During following correspondence I suggested that a dedicated trainer may be a better approach. We didn't reach an acceptable conclusion at the time so I suggested that I would sit down and design my idea for a practical build/fly trainer based on my experience gained over years from many modelling disciplines.

I listed such criteria I reckoned to be important for both a near-first build and a practical trainer: The model had to resemble an aeroplane and be attractive to look at. It had to be a straightforward build of conventional construction using readily available materials, and the result had to be easy to fly with no nasty surprises. I firmly recommend that all newbies to r/c flying should join a club and take lessons from an experienced pilot using a buddy-box system.

Thus, 'Henry' evolved. The model is a practical size at 48 in wingspan - easy to transport and not too expensive to build. Electric motor used on the prototype is HK Park 450, with 30 Amp 'Plush' ESC and 3S 1500 lipo. All servos are cheap HXT 900. I used HK plastic film for covering. I find it among the easiest to use and cheapest to buy. The fuselage is basically a slab-sided box. The electric motor installation is simple with no fancy shaped cowling and is well ventilated. Although this plan shows a popular electric installation, it would be quite easy to modify the front end prior to initial build to accept a range of suitable i.c. options via simple engine bearers.

Before starting construction, cover the plan a non-stick membrane. I have re-used the same covering-film backing for this job for years. Frame up the the first fuselage side over the plan, sand it clean and then build the second side over the first, again separated by the film backing. I generally use Titebond aliphatic glue for all woodwork - the red-bottle brew which is readily sandable. Assemble both sides into the basic box. I use a homemade jig for this, but for a one-off job assembly between a couple of bricks or sticks of 4 x 2 timber will work. Then install servo trays etc. The plan shows the wing bolted in place. Two dowels and rubberbands works just as well, survive accidents better, and may be easier to set up for the newbie.

There are no tricky plastic windows to install. I never seem to be able to do this properly without getting messy glue everywhere.

Undercarriage is a simple tricycle set-up for easy takeoffs and landings. The nose-wheel is a simple arrangement - a straight wire shaft set into a hardwood block and retained with ca glue. In my experience, steering nose, and tail wheels are highly over rated and not worth the trouble. Non-controllable castoring wheels are even worse. With a little practice you can usually steer on the ground using rudder only.

The wing construction method shown here is a simple 'D- box' arrangement I have developed over the years and use almost exclusively on all my models these days. This wing is flat-bottomed and thus easy to build on your FLAT building board. All ribs are a simple shape with no steps or individual notches involved. Bolt the rib-blanks together into a block using two 3mm or similar bolts with a plywood or formica pattern at each end. Plane/sand to shape. The two spar slots are cut into the assembly with a razor saw after the block is shaped. The wing is built in three panels - left, right, and centre-section. The top and bottom LE sheet is cut length-wise from standard 4 inch wide balsa in order to save waste.

Pin the LE and TE sheeting down to the board over the (protected) plan. Glue the lower spar on to the rear edge of the TE sheet. Glue all the ribs in place, not forgetting to cant the root-ribs to provide the required dihedral. Glue the upper spar into place followed by the vertical sub-LE which is glued on top of the LE sheet. When dry plane the top of the sub-LE to align with the top edge of all the ribs. Apply the top LE and TE sheeting using lots of pins. Apply all the shear-webs between the ribs - but not at the wing-root where the plywood spar-doublers are fitted later. When dry apply the top cap-strips. Lift the wing panels from the board. Apply the lower cap-strips, but not the underside sheeting at the centre-section and first bay of ribs each side. Plane/sand the sub-LE to a smooth finish and then glue the LE proper into place. I generally cut my own stock for this. Glue the rectangular section strip in place and then plane/sand the LE to shape when dry.

I like rounded wing tips as shown rather than thick balsa blocks glued to the tip ribs. They look neater, and easier to neatly finish at covering time. Cut a rough cardboard pattern to shape. With the wing pinned down, offer it up to the tip rib. Cant it up to approx position and firmly pin it down. Slide a straight-edge, steel rule or straight wire or similar, length-wise along the wing and mark where it strikes the tip pattern. The idea is to arrive at a flush top surface along the length of the wing. When shape is acceptable, glue the tip in place and finish with the infill blocks.

The wings are now glued together. This is a simple operation. the wing panels are butt-joined to the centre-section and glued with (5 min) epoxy having first chocked-up the outer panels to specified dihedral. When dry, slice through the ribs behind the rear face of the mainspar to provide a slot for installation of the plywood spar doubler(s). Note, it is easier to make the first cut rearward towards the TE and the second cut flush with the rear face of the spar. Then make a cardboard pattern of the required doubler, cut same from plywood and install with copious amount of epoxy glue. Finally, apply the sheeting at centre-section and first bay each side to complete.

Fin and stab are quite straightforward. Frame up using 3/16 sq balsa sticks pinned down over the plan. Elevators, rudder,and elevators can be hinged in a variety of ways, after covering. Suitable size hinge-points or just plain mylar hinges work for me. Apply the covering of your choice. There are plenty of instructions on this if you need to look around. I usually cover the separate items, fin and stab, prior to assembly with the fuselage.

Prior to flying, check all controls for correct movement and also that CG is in correct place, in this instance on the mainspar. A little forward is OK, but rearward is heading for trouble.

I have flown many trainers over the years and really haven't found one I prefer to this. It is entirely predictable, gentle when flown that way, or very manouverable when pushed, loops rolls, cuban eights etc. Alongside our main grass strip an old strip of composite cricket strip material had been laid, I guess about 20 yds long by 8 - 10 ft wide. I used to amuse myself flying endless tight touch 'n go circuits around this, full length and without running off the sides. It is surprising how this sort of flying hones the skills.

My prototype model as pictured here is now upwards of six years old, flown many dozens of flights and still in good flying condition.

As a footnote - Back in 2015 I supplied a set of plans to Henry who lives in Newbury, north of London. He built his model over a few weeks, joined a local club and learned to fly there. He has long-since soloed and now flies all manner of different models. Four years ago my wife and I visited UK. We met Henry in Cambridge where he showed me around Duxford, Old Warden and then back to the Imperial War Museum and others in London. We still yarn regularly via Skype for about an hour each week. Isn't this a great hobby?" 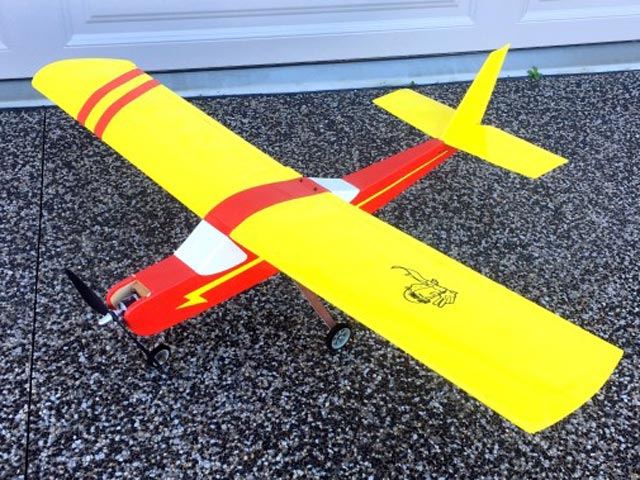