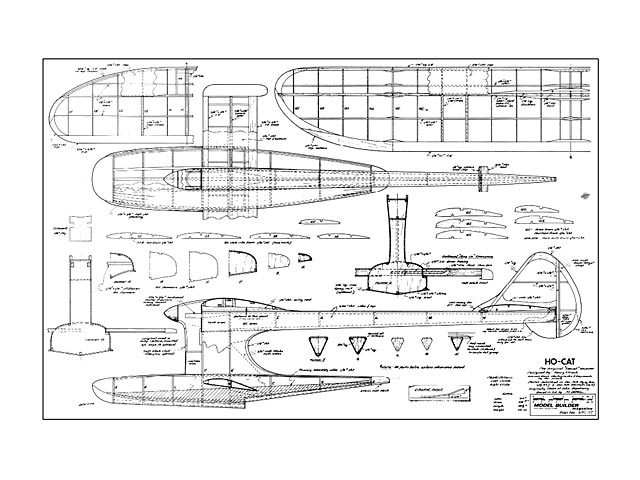 Quote: "This interesting model, never before published, was at the first ROW meet in the US, back in 1939. Here's a complete construction article by none other than its famous designer.

A mere forty-one years ago, a flying boat design was dreamed up and built, without drawings, in two weeks for a pioneer ROW (Rise Off Water) extravaganza at Lake Hopatcong, New Jersey. Now a replica constructed from remains, photos, and full-size plans has used up two years! But it was worth it to find if the original was really any good, as only a few hasty (though promising) hand-launched test flights were made over the high, soft weeds of our old Holmes Airport flying site.

To one raised on cement and gravelly earth, the transition to a liquid flying field was traumatic. Cranking an inverted Baby Cyclone ignition engine and getting the model in the water while maintaining a vise-like grip on the gunwales of a willful shoe-box sized rowboat did not lead to clear thinking, and no takeoffs resulted. Once back to the safety of the city, the only water flying was flung by cars running through gutter puddles on rainy days. But at least your pants still got soaked. Periodically the aging remains of the model were reviewed and finally influenced a successful flying boat, the Sea Cat.

The Ho-Cat, now so named in honor of that long ago adventure, has indeed proven to be a graceful off-water F/F performer. The original Baby Cyclone has been put back on the shelf, and a far handier inya .19 now does the work. Radio gear is to be installed next to permit flying in more confined areas, away from the wakes of the many boats churning up the Connecticut River.

CONSTRUCTION: Cut the shaded area primary side planks from 1/8 balsa. Cut out the former halves and join at the center line. Mark the position of the formers on the side planks. Cement the formers carefully to the locating lines. Insert the keel, chine, and deck stringers. Check the assembly for alignment and warpage. Plank with 1/8 x 3/8 soft balsa from the deck stringers to the top of the side plank. Always fit a left and then a right plank to avoid twisting the structure. Add the after bottom of 1/8 sheet.

Cut the tail boom top from 3/32 sheet and cement corner strips of 3/16 square along the edges. Position the triangular formers between the corner strips and add the 1/4 square keel strip to the apex of the formers.

Locate the tail boom assembly on the hull pylon formers. How? Very carefully! Sight and check to get the tail boom aligned with the centerline of the hull, and at the angle indicated on the side view. Soak the forward portion of the side covers and pin to the frame to form. When dry, cement in place and recheck for twist.

Prepare to incorporate the sponson structure into the hull. The original 1939 version had integral sponsons. Frame up one left and one right sponsor), allowing the spar and leading and trailing edges to extend to the centerline of the hull. Lay out the sponson position on the hull side plank and cut openings to admit the spars.

Soak the forward hull bottom sheeting in hot water and lash in place with rubber strip, wedging scrap balsa blocks into the concave area at the bow. When dry, cement in place using plenty of pins. Rough-shape the bow and stern blocks of soft balsa and cement in place.

Fill any openings around the rib in the hull to seal against leakage. Smooth the planking with a razor plane and sand with successively finer grades of sandpaper. Finish with several coats of clear dope.

The flying surfaces are simple structures that were common in those days. However, note the addition of tapering doublers to the spars at the center area, a refinement not vintage but surely needed for R/C maneuvering. Join the individual panels on a flat surface with care to guard against warped and mis-aligned surfaces.

If the model is to be made R/C, a miniature two-channel system with light pushrods and small control surfaces are recommended. The engine can be shut off by a clockwork timer or a third servo. If an ignition engine is to be used, test on land to get everything sifted out, rather than filtered out. Wet ignition systems spoil the fun, and glow engines full of water only require persisent cranking and lots of priming to mix with the water until a combustible mixture again results.

Adequate angular difference between the wing and stab incidence is necessary for takeoff, so the CC should not be aft of the indicated position. The climb is an easy left circle with a large right circle on the glide. Adjust the rudder slightly for glide turn. The left climb should be inherent to the flight pattern. Thanks to the father of Old Time, John Pond (not Old Father Time), we got this old favorite together again to enjoy.

The accompanying profile view suggests what might be done with a man-carrying version of the Ho-Cat, scaling the model up about six times (reducing the wingspan and dihedral somewhat) and pushing around various other components slightly. The most immediate problem may be how to pay for 216 times the balsa required to build the big one at current prices!" 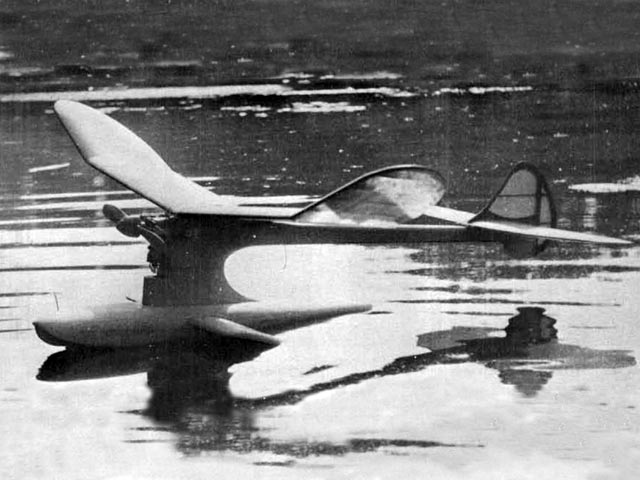 Sorry Steve, plan we should have supplied doesn't have the wing, that was to have been £10 extra.
Circlip - 24/07/2021
Ha ha. You've missed your chance now, Ian. First rule of Pirate club is, always trace all the parts from the first 2 sheets and put them on a 3rd sheet. Then put your name on it. Then open an ebay shop, and charge $25. You'll never make any money just sharing complete plans, for free :)
SteveWMD - 25/07/2021
Add a comment