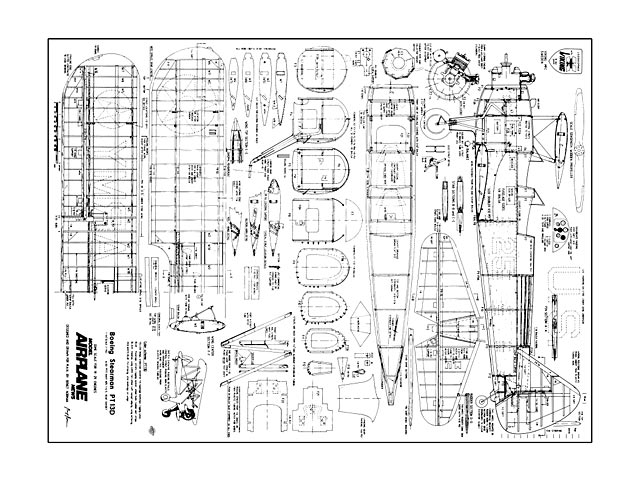 BIG IS beautiful, but small can be smarter! A little plane costs much less and is easier to assemble. Often, a little beauty creates more interest than a big one. You will stand out in the crowd!

That is why 'dime scale' might be for you. To start with, here is an all-American 1/10-scale Stearman, which gives a wingspan of almost 40 inches and a wing area of 420 square inches. With a weight of 4 pounds, the wing loading is 18 ounces per square foot. The wing area is calculated as an equivalent area, not counting what passes through the fuselage, and counting only 85% of the lower wing to take biplane efficiency into account.

The famous Boeing Stearman was designed by Floyd Stearman before the Stearman factory was merged with Boeing in 1934. This was the last military biplane to go into production in the US. It is also unique for being the first aircraft to meet the specifications of both the Navy and the Army. A few hundred of the first versions were delivered before the onset of war demanded a marked increase in production. The Army then got their Primary Trainer 13D, equipped with 215-hp Lycoming engines. The later PT 17 version (Navy N2S-1 to 4) was the most numerous and had Continental engines.

There are a large number of variations of the Stearman model 70 aircraft, mainly differing in choice of engine only. An export version, model 76D, was even armed with machine guns in the lower wing and in the aft cockpit. A Canadian RCAF version had canopies and brought the name 'Kaydet' to the aircraft. Up to February 1945, a total of 10,346 model 70 to 78 aircraft were built. This figure makes the Stearman the most-built biplane in the world! Quite a few of these still fly around our skies.

CONSTRUCTION: The fuselage is built up from conventional balsa sides with doublers. The front end is a little unusual though, as a plywood structure that carries the engine and the landing gear loads is built separately. The plywood formers F3 to F6 are first assembled together with ply floors F20 and F21. Mark and drill holes for motor mount and landing gear brackets. Also, try out the tank installation and drill holes for the fuel lines in F3. Glue the fuselage sides with doublers to the front assembly, carefully checking they end up parallel. Add the rest of the aft formers, the cockpit floor with F7s, and the tail wheel assembly. Of course, it's simpler and lighter with an unsprung tail wheel, but it's not as fancy!

Sand the fuselage sides a little (1/32-inch) thinner just forward of the dotted line, where the side stringers end. This will look like the distinct separation between the fabric-covered structure and the sheet metal tail cover of the original aircraft. Glue all side stringers to the fuselage sides in full 1/4-inch width. Use a mini-plane to form the stringers in accordance with the plan sections. The front end of the lowest stringer will be thinned down to nothing where it reaches the wing cutout.

The landing gear is made from two pieces of piano wire. Don't forget to slide on the brass tubings and collars before making the final bend on the front leg. Mount the landing gear to F20 and F21 with commercial brackets. Lock the nuts with Loctite or cyanoacrylate. Epoxy the strut supports F22 and F22A in place against the fuselage sides and F4 and F6 respectively.

Fuel-proof the tank bay and make sure again that you can slide it in place aided by long fuel lines. Wet the fuselage sides in the front ends and bend them inward with rubber bands. Then, epoxy F2 to the sides. Check that you can get the engine mount in position, reaching only from the front and rear.

Now it's time to plan the radio installation. The battery has its own place on p of F21. The width is enough for three servos, so you should have no problems. Keep heavy things forward. Also, plan for the switch and a charging socket. I put the switch in the aft cockpit as a steering column! The charging socket must be reached from the outside, otherwise you'll have to disassemble the model just to charge it. Anyway, figure out your installations so you can install all the pushrods. Install pushrod supports in the back end of the fuselage to prevent flexing... " 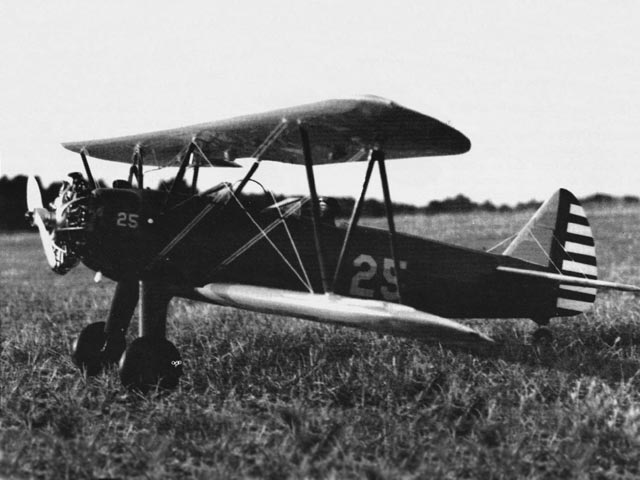 The Polikarpov U-2, and not the Stearman trainer, was the most ever built biplane of the world. More than 30,000 of them were fabricated in the Soviet Union and in Poland.
RobertS - 22/07/2021
Indeed. We are of course just quoting the text from the article, as published in 1983. But I agree, yes it was a surprisingly ill-informed thing to say.
SteveWMD - 22/07/2021
Add a comment