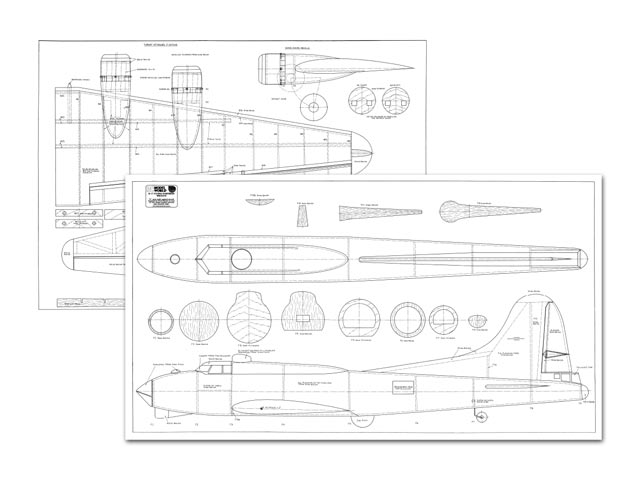 Quote: "Evocative rendition of this four-engine American bomber spans 76 in and can be flown on four to six-plus function radio and four engines up to 3.5cc in size. B-17 Flying Fortress, by Pavel Bosak.

I have wanted to build a multi-engined airplane ever since I took a piece of plywood and spruce in my hand for the first time. There was something very romantic about this type of aircraft's slightly out-of-synch drone as it made a high pass that I could not ignore. Of course, as with most dreams, I had to wait a few years before I could turn it into reality and first I built two twin engined models - the Cleopatra and the Water Ranger which was a seaplane.

The first four engined model that I built was also a seaplane - the Boeing B-314 Yankee Clipper and the latest one is this B-17 Flying Fortress. I will not say anything about the history of this famous aircraft here since it has been so well documented many times before, so in this article I will tell you only about the model.

This model cannot be described as true scale - only semi-scale. Although the dimensions are correct , I have not added a great deal of detail to the model in order to make it simpler than true scale. There is no reason however why more detail should not be added. As you can see from the photos, the model does look very realistic even from a very short distance away.

Wings: When you start to build this model, you have to start with the wings since you will need the wings completed before you make a start on the fuselage.

The wing is of all balsa construction and the ribs for each panel are made up using the sandwich method. Cut balsa rectangles slightly larger than the size of the biggest rib. Make plywood templates of the root and tip ribs W1 and W12 according to the plan and sandwich the required number of rib blanks between them. By sanding the blanks smoothly between the two plywood templates, you will make all the ribs at the same time. It is useful to mark the ribs with the corresponding numbers over the plan. Cut all the slots and notches as required. Ribs W1,2,3,5 and 6 are strengthened with 1mm plywood. The wings are now built directly onto the main and subsidiary spars. Glue the false leading edge W15 from 5mm balsa in position. Both wing halves are then glued together with plywood braces W22 and W23. Now sheet the bottom of the wings and install the aileron and throttle pushrods and linkages.

Glue the trailing edge W16 from 10mm balsa and the wing tips in position. Cut bulkheads N1 and N2 and glue them in position at the engine mounting beams. Install the fuel tanks into the wings and, from 5mm balsa, plank the nacelles. Sand the whole wing and cut out the ailerons and flaps. Onto the wings, glue W17 and WI9. At the flap positions glue part W18 and at the aileron positions glue part W20. These are all from 10mm balsa. Flaps and ailerons are connected to the wings with nylon hinges.

Stabiliser: The stabiliser is of very simple construction. Make the basic balsa frame according to the plan from 5mm balsa covered on both sides with 3mm balsa. Sand the leading edges to section. The elevators are sanded from 10mm balsa sheet and fitted into place with nylon hinges. The elevator halves are connected with 3mm piano wire.

Once the fuselage has been completely planked, cut away the areas around the wing position. Fit the captive nuts for the wing fixing bolts in position and trial fit the wing. Sand the fuselage as required until the wings are a perfect fit and then sand the rest of the fuselage.

Glue the cockpit floor in position and install the crew. In my model, I used small puppets as crew-members with the pilots' seats and the instrument panel made from scrap balsa. Now glue in position the acetate canopy windows and, from block balsa, make a canopy roof. The same method is used for the rear gunner's position. The front, dorsal and belly turrets are moulded from thin sheets of acetate.

The frame of the fin is made from 10mm balsa. The shape is shown on the plan. Glue the former F10 in place and cover the fin with 3mm balsa sheet both sides. The rudder is made from 3mm balsa with 14mm balsa where the hinges will fit in position. The rudder is fixed at Fl with nylon hinges. After the fuselage has been sanded, cut out the hole for the elevator and epoxy it in place.

Covering and painting the model: The choice of finishing methods is best left to the builder since each of us has our own favourite method. My B-17 was finished with thin Modelspan tissue and six coats of clear dope were used. The colour scheme was done with acetone based paint. The panel lines and hatches were applied with a technical pen and black ink. After the insignia and labelling were painted on the entire aircraft was given a final coat of fuel proof clear lacquer.

Finishing of the model: Install everything into the model. I used Rom-Air landing gear although only for the main gear - the tailwheel is fixed in the down position. The tank and operating valve is in the fuselage.

Install the engines - I used four 3.5cc engines although I am sure that you could safely use smaller units because my B-17, flying with full throttle, is more like an aerobatic model! Install the radio gear and make sure that all functions are working correctly.

Check the centre of gravity carefully, making sure that it balances where shown on the plan. In my model, I had to install 20dcg (around 7oz) of lead in the nose to make it balance.

Flying the model: The flying characteristics of the B-17 is the same as any other model as long as all the engines are working properly. If one engine stops, you can still continue the flight but if two engines stop on the same side, you must throttle back the remaining engines immediately and land. It is not a clever thing to continue a flight in this configuration!

I have fitted flaps on the B-17 and, although not strictly necessary, I use them for take off and landing which gives the model a very short take off and landing roll. In the air, the B-17 is very realistic although not quite so realistic at full throttle! From straight and level at full throttle I can fly rolls, loops and inverted flight with no problems whatsoever!" 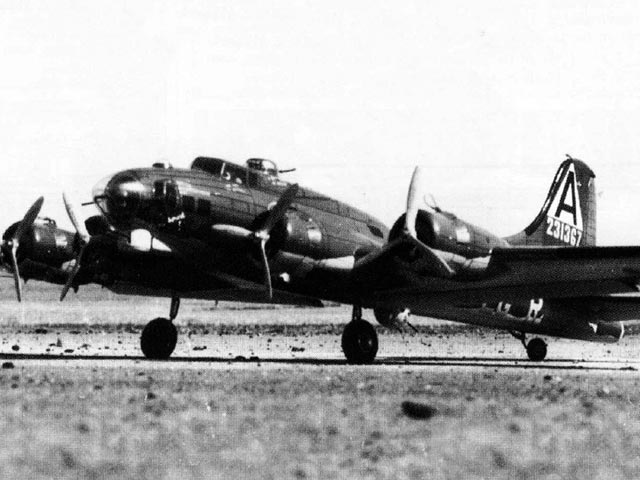