Quote: "Our Perennial Peanut Professor is back with another rare one. With its short nose moment, it's a perfect match for the Peanut size Brown CO2, and it's a good flier to boot.

This is an obscure airplane that was designed around the end of World War I and for which plans were marketed by the George D. White Company of 107 East 49th Street, Los Angeles, California, in 1919. A very early forerunner of the homebuilt movement, the configuration is generally suitable for a Peanut model.

Its major fault as a Peanut design is its very short nose. This is not a real problem if it is to be powered with the new Peanut size CO2 engine being manufactured by Bill Brown.

The model illustrated here has the Brown engine installed exactly as shown on the plans and balances at the CG point indicated. It weighs 14-1/2 grams complete, of which the engine installation is 5-1/2 grams including the 2 cc tank. Model structure is all balsa wood with the exception of struts, tailskid, rudder outline, firewall, and of course, the wheels and engine installation. The model is covered with lightweight Japanese tissue and has three coats of thin nitrate dope.

I am indebted for the inspiration to build this little Peanut model to Joseph Shultz of 1752 Pleasantview Rd., Pottstown, Pennsylvania who sent me a copy of the original full size plans. These are on four sheets of 11 by 17 paper and have all the data George D White thought were necessary to build the real airplane. Intentional deviations from exact scale include larger tail surfaces, and probably dihedral. (The model has 3/8 inch at each wing tip and the full size plans omit any mention or indication, so the airplane probably had none.)

The structure of the model is very simple and does not require a lot of explanation beyond what is on the plan. The engine installation is probably worth a short description because it takes a little force to fill the tank and the model needs to be reinforced to take these loads.

Build the conventional fuselage structure by making the two side frames directly over the plan and then add the cross braces as shown in the top view.

Start the engine installation before adding the cowl. Very carefully, bend the engine tubing to the shape shown in the side view so that the engine, filler, and tank will be in the proper place in the fuselage. Bend the several loops required over a round dowel or piece of 3/16 dia. tubing to keep from kinking the tubes at the bends. Make the solid balsa filler block and slide it over the filler. The top of the filler will have to be removed, (don't lose any parts) to keep the hole as snug as possible or you can make the block in two parts. Cement the filler in the block securely. (I used Hot Stuff and baking soda to fill the gap between the hole and the filler, being very careful not to get any in the engine.) Replace the filler top.

Next, cut out the firewall from 1/16th thick plywood. The front view shows the shape of the firewall. There is a cutout at the bottom to allow air to blow past the engine cylinder and then past thetank. It also allows the tubing to pass back into the cockpit area. Mount the engine on the firewall. (I used bank pins, which are thicker than ordinary straight pins and cemented them in place with baking soda and Hot Stuff on the back of the firewall. They were then cut off about 1/8th inch aft of the firewall.)

Now remove the forward top cross piece from your fuselage box and carefully cement the firewall in place. Then position the filler block on top of the fuselage and cement it in place. Add the engine mount gussets at the longerons forward of the firewall, and the two 1/16th thick filler braces from the landing gear cross brace to the filler block. These braces should be hard balsa because you'll be holding the model at the axle and pushing down on the filler during your refueling operations.

Fix the tank location by installing the floor made out of 1/32nd balsa. Now finish the model. Fill in the bottom forward bay of the fuselage with balsa or plywood sheet for extra strength.

The wing and tail gussets were added to the plan after the model was built and, while not absolutely essential, may help prevent covering wrinkles from appearing.

The model, as built and balanced as shown on the plan, flies quite nicely, with a maximum motor run of 30 to 40 seconds. It has 1/8th inch of washout at each wing tip (my most favorite adjustment) and required about 1/16th inch of up elevator relative to what is shown on the plan. The powered flight is rather flat and the glide is fairly steep, so some more up elevator may be in order.

Oh yes, while I've read some of the controversial comments in some of the model magazines about 'dolls' in model cockpits, I think that a pilot enhances the looks of a model such as this - mine was carved out of Styrofoam and painted with plastic model paints."

Quote: "The George D. White, Co. Sport Monoplane, an early home-built from 1919; Peanut plan by Walt Mooney from the December, 1981 issue of Model Builder. Designed for CO2 but easily adaptable to electric power. Wing and horizontal tail have been re-drawn. No scale type link to Wikipedia, but images and information can be found here: http://aerofiles.net/_wh.html. Regards," 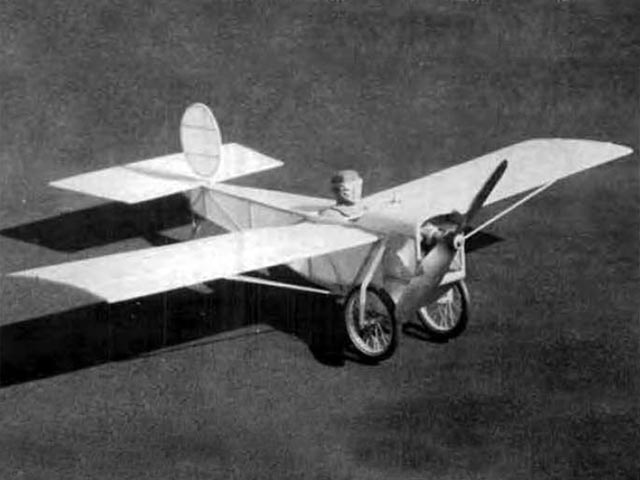