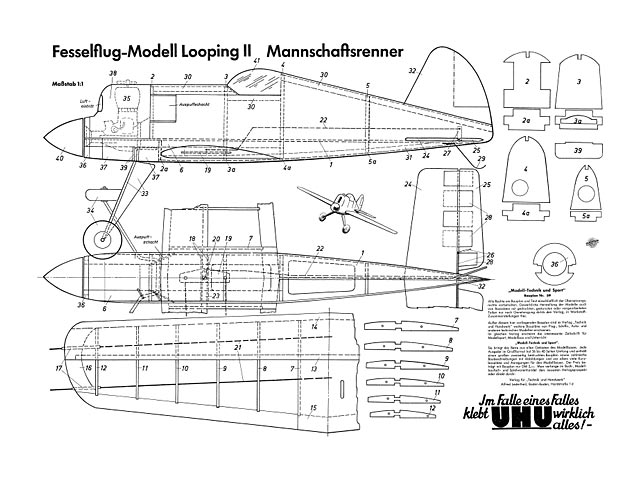 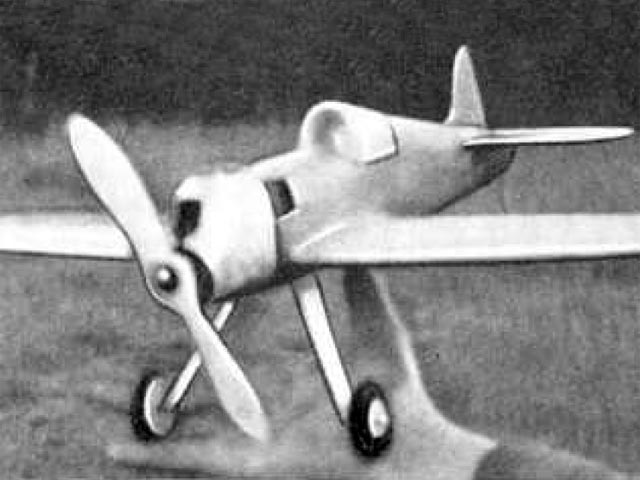 Where did the name "looping" come from? I'm sure it was from the early days of control line flying when every enthusiast's dream was to perform a loop. Not all models were capable of such a maneuver. They had to be light with lots of wing area, not a rock on a string. In 1950 I was just 6 years old, having never seen a powered model, but I knew they existed, hearing them blocks away every weekend. Nobody could mistake that doppler effect rotational sound. My first model was a 10 cent glider, with which I scored my first thermal flight in front of Edgewood Gardens Apartments where we lived. 10 cent gliders are still available but not as good and now costing 5 dollars. That's how much 10 cents was worth in 1950. Later the next year I received my very own Cox model, complete with 049 engine, battery and fuel. It was not like later Cox models, which were molded plastic bricks. Mine was light weight vacuum formed thin plastic, with a real airfoil, it would really fly. They flew them at Disneyland every day. I recruited the older kid next door, the Boyd family, who knew how to start my Cox. It lasted half a flight. Into the ground. I was holding my handle the wrong way, horizontal instead of vertical, also didn't know which way was up. I saved the engine, rest was history. Fast forward a couple of years, my buddy Robert Green said he could start my now dusty Cox. We mounted it to the door frame of his laundry room and fired it up. Amazingly it still ran fine. Then he noticed the thread-on cylinder was loose, wrench now lost of course. He tightened it with a Mississippi Speed Wrench, Vice grips. As you can imagine, it never moved again. In later days, I was able to obtain perfectly good Cox engines for 50 cents the day after Christmas after their airplanes had been thoroughly destroyed. We made many more successful models from cardboard and flew them in the vacant lot next door. That's where I performed my very first actual loop.
Doug Smith - 18/07/2021
probably in a sort of german translation "looping" is intended as circling/looping around the pilot.
Always interesting your stories Doug. Pit
pit - 18/07/2021
wow! you are so fast
thanks
Greetings Robert
Robert Schulze - 20/07/2021
Add a comment