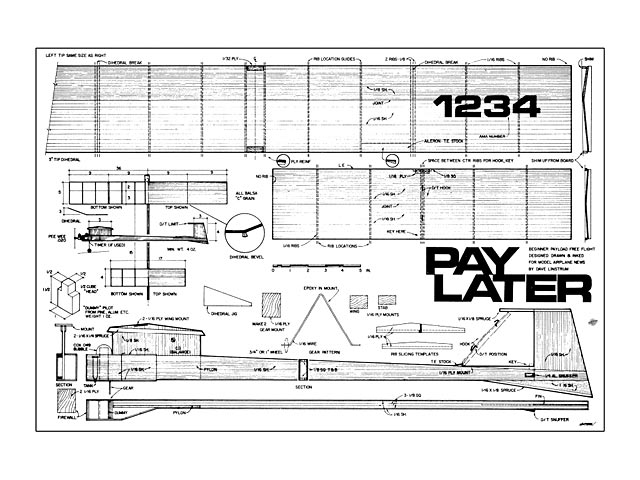 Quote: "Payload Free Flight has continued to grow in popularity. Beginners to this exciting part of the hobby will find this latest design high in performance, yet easy to construct.

In 1967, the Free Flight Contest Board of the Academy of Model Aeronautics voted to reinstate the Payload Event - and thus a Phoenix was born. Rising from the ashes of the old PAA-Load Rules came new Provisional Rules, still based on the principles of the old event, but simplified and updated for today's hot engines and hi-performance airframes. While these rules are intended for AMA Competition, the FFCB realized that this is an excellent small field and sport type of flying. The models which fit the rules are fairly small, can be flown with inexpensive engines, are light enough to crash or have a rough landing and still bounce back for more. Best of all, the challenge is not purely in endurance; the model must demonstrate the capability of taking off the ground with a payload simulating a human pilot. A sister event called Clipper Cargo (it was once sponsored by PanAm, as was PAA-Load) does this and also requires the lifting of a heavy cargo, and the guy who lifts the most in three flights wins.

The Payload Rules are simply this: maximum wingspan is a mere yard of wing, maximum power is an .020 engine (actually .024, but no one makes this size) so you have a choice of the excellent Cox Pee Wee, (as on prototype) or Tee Dee .020, (for contests). Minimum weight of airframe is 4 ounces, the dummy pilot must weigh an ounce and be sized as he is shown on plans, and the model must have two wheels which allow unassisted ROG. You are allowed a 15 second engine run from a standing start, with a 2 minute max. The guy with the high time wins the pot.

All of the Payload designs published or kilted in the last decade use built-up balsa and tissue construction, and are generally too difficult for most beginners of any age to really handle. This design, which uses no tissue covering and has a minimum number of parts, lives up to its name, with the emphasis on the 'Fly Now'. We hope the airlines won't mind our borrowing their slogan; in fact, if enough of you build this thing, maybe we can convince PanAm to 'make the going great' by returning as a sponsor for PAA-Load Events in AMA Contests.

Speaking of sponsors, the National Free Flight Society (NFFS) realized the importance of sponsorship for this Provisional Event, since without sufficient interest shown by actual competition during the two year provisional period, it might never become an official AMA Event. Therefore the NFFS proceeded to sponsor the event at the 1968 and 1969 Nats as well as at regional meets such as the 1968 King Orange Internationals in Sebring, Florida (attend this next New Year if you really want to have some 'fun in the sun'). This NFFS effort afforded the opportunity to fly to a lot of old Payloaders who had kept their ships mothballed after the event was dropped in 1961. It also allowed some newcomers to get their feet wet, and we hope 'Pay LATER' will be your choice to break into weightlifting.

Don't be deceived by the boxy lines or the simple construction; it is an efficient airframe, and if carefully built with warp-free balsa, it is quite competitive. The prototype was designed for the inexpensive Pee Wee engine and used a simple eye dropper tank. If you expect to compete against others using Tee Dee engines and Tatone Tick-Off timers, you should use the same equipment. However, for sport flying and just friendly little compe-titions, the cheap way is still the best.

CONSTRUCTION: Best way to begin is to thoroughly study the full-size plans and familiarize yourself with the way everything fits together. Notice that wing and stab are built upside down so that ribs can be easily glued in place. The fuselage is built up 'starduster style' on the plan and the motor mount/cabin thus turns out off-center. Don't let this bother you; it does not affect the power pattern enough to make any problems. Try to use the adhesives called for - HobbyPoxy I for the epoxy joints (but be careful; it sets up fast, so don't mix a lot) and either Franklin Tite-Bond or SigBond for all wood joints. If you are a youngster, in some communities you won't be able to buy any regular 'model airplane glue' anyway, they think you want to sniff it instead of stick stuff together with it. Who has time to sniff when they want to get out and fly. Right?

FLYING SURFACES: It is important to pick warp-free, kiln-dried balsa for this; look for sheetwood that lies flat and has a funny speckled appearance to it. This indicates that it is quarter-grain (sometimes called c-grain) balsa and is stiff enough for the surfaces. The rest of the model can be built from more flexible A or B Grain if you like. Begin by marking the position of the ribs on the bottom of the sheet which will form the wing and stab..." 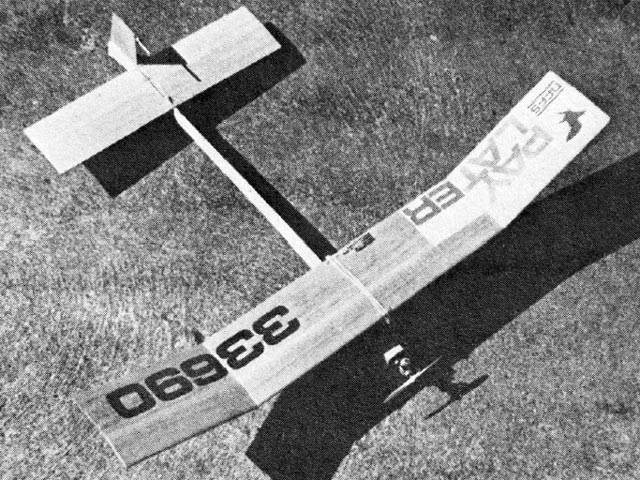