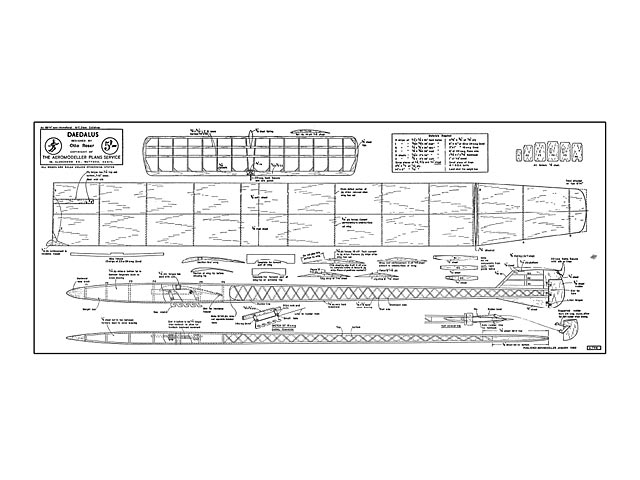 Quote: "By popular request! A solid wing A/2 glider with high contest performance. Daedalus, by Otto Roser of Hungary.

ONE OF THE MOST interesting Continental designs to the A/2 glider specification observed at the 1959 World Championships in Belgium was Otto Roser's first-line model. Actually named 'Icarus V' (a name we cannot continue as we already have a well-known control line design bearing that title in our plans range), Roser's design embodies one of the simplest wing constructional forms and employs the Jedelsky airfoil.

The forward section of the wing thus forms one solid spar and the rear half is a trailing cambered portion continuing the upper surface in smooth contour and supported by under-surface fences to retain the airfoil camber. In order to preserve a reasonable weight distribution and to avoid weight mass at the wingtips it is essential that the balsa be of light grade and Jedelsky has been quoted as saying that quarter-grain (speckled surface) is essential for rigidity. The weight of the finished wings should in fact not exceed 3-1/2 oz each half, which is a reasonable enough tolerance allowing almost 50 per cent. of the total weight to be included in the main lifting surfaces.

The fuselage is built up in order to save weight and care should be taken to see that the tail portion and tailplane do not come out too heavy.

Reference to AEROMODELLER of June, 1959, pages 278/9, gives further information on the Jedelsky developments of Benedek airfoils together with sketches of his unique wing construction.

Other interesting novelties incorporated in Otto Roser's design are the swing multi hook device which is used to operate the two position auto-rudder. Because the fin is of a cambered section, slight left rudder may be necessary for straight tow trim and a bent dural two-sided horn has been employed for making simple adjustments.

In the actual contest at Bourg-Leopold, Roser's final placing at 39th position was by no means a true indication of the potentialities of the model. On his second and fifth flights the model was caught in severe down-draught, the other flights being two maximums and 2:39. One of the great virtues of this type of wing is that provided it is set up on a flat building board during assembly the wing is virtually warp-free. Great care should be taken, however, to see that any tissue protective surface is applied and dope with the wing pinned on a flat base-board and that the same number of dope coats are given to upper and lower surfaces.

It will be seen on the drawing that wing construction is made more simple by employing jig strips to support the under-surface fences and these are removed after the wing panels are completed.

The fuselage incorporates Warren bracing with alternative diagonal cross pieces to offer a rigid fuselage of light weight and very small cross-section. Sides are built flat over the plan together with the 1/16 in ply nose panels, then joined by formers F1 to F6 and top and bottom cross bracing and nose reinforcement fitted. Special care should be taken to see that the wing incidence keeper slot, accepting the ply reinforcement at the wing trailing edge, is at an identical position on each fuselage side otherwise wing panels will not line up accurately.

As a model for the expert and also for the enthusiastic comparative novice Daedalus is offered as a robust A/2 glider with excellent competition reputation in all weather conditions." 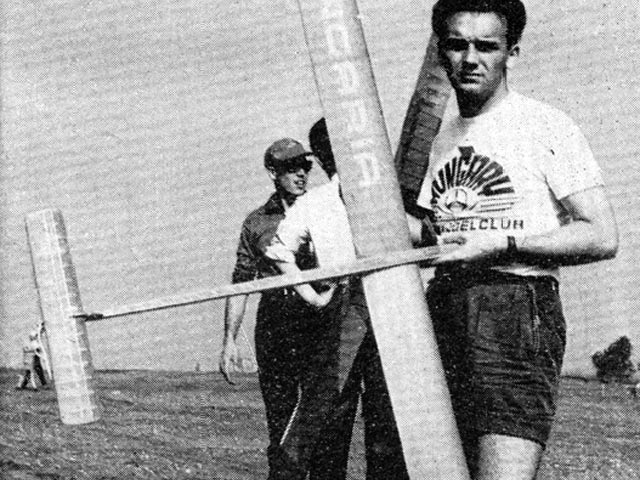