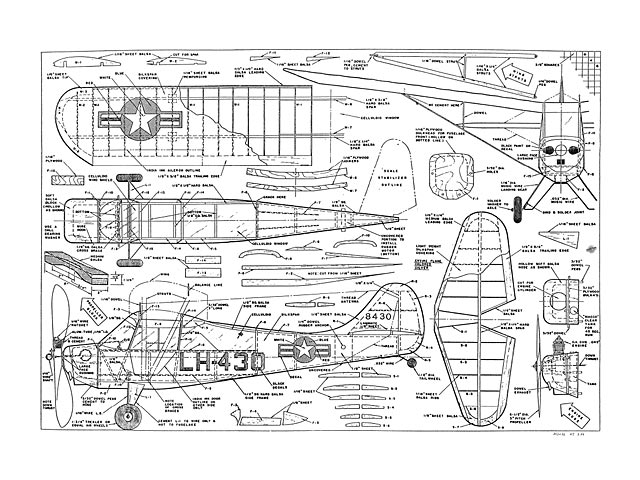 Quote: "Miniature Aeronca Grasshopper. Build this scale-model Army liaison plane. It can be powered with either rubber strands or a glow-plug engine. By Walter A Musciano.

In this day and age, when our attention is directed toward supersonic jet fighters and stratosphere bombers, it is easy to forget the tiny liaison planes that played such an important role in World War II and the Korean conflict. These craft are usually standard light planes that have been redesigned to meet military requirements. Used primarily for artillery spotting, observation, communication, photographic work, wire laying, supply dropping, light cargo hauling, and special radio activities, these craft can also be employed to evacuate the wounded.

Although they appear, at first, to be 'sitting ducks' for any enemy fighter to shoot down at will, it was found that the low flying speed coupled with the ability to fly at treetop level makes the Grasshoppers, as they are called, difficult targets for the modern jet fighter. The swift, powerful jet often overshoots its target and smashes into the ground before it can zoom up for another shot.

We selected the Aeronca L-16A as representative of these Grasshoppers. It was developed from the Aeronca Champion which enjoys considerable popularity among private flyers. The L-16A cruising speed is 92 mph and endurance is two hours at that speed. Take-off distance with a 10-mph headwind is 170 feet from a turf runway. This is a considerable advantage in view of the fact that these craft are often required to operate from small fields and pastures that are unprepared for use as airfields. The rate of climb is 870 feet per minute at 52 mph with a gross weight of only 1,220 lb. An air-cooled pancake-type 85 hp Continental C-85-8FJ engine powers this plane.

Before we begin discussing our free-flight model, we wish to express our sincere appreciation to George A Page, Director of Engineering and Research for the Aeronca Manufacturing Corp for his generous cooperation.

So perfect are the proportions of the Aeronca L-16A for a free-flying model that only added dihedral and enlarged horizontal tail surfaces were required for perfectly stable flights. Our model can be driven either by a 1/2A glow-plug engine or by rubber power. If desired, two noses can be made; then you can fly with either a rubber motor or a glow-plug engine within a few minutes. The prototype model is built to the scale of 1 in equals 1 ft and contains approximately 160 sq. in. of wing area.

Begin construction by laying the fuselage side view on a flat board or work table. Pin the 1/8 sq fuselage side-frame strips directly onto the board over the plan. Straight pins can be driven through the balsa strips into the table with a small tack hammer. Cut the sheet-balsa pieces No. F-3, F-4, and F-5, and pin these in place as well. It is important that only the basic side-frame components, not the stringers F-2 and F-8, be pinned to the bench during this operation. Apply cement to all joints while pinned to the table.

When dry, remove the pins but do not remove the structure from the work table. In view of the fact that two basic side frames are needed and they must be identical in every respect, it is advisable to pin the second side frame directly over the completed frame and apply cement to all joints. Remove the frames from the table when the cement is dry and separate them by passing a razor blade between..." 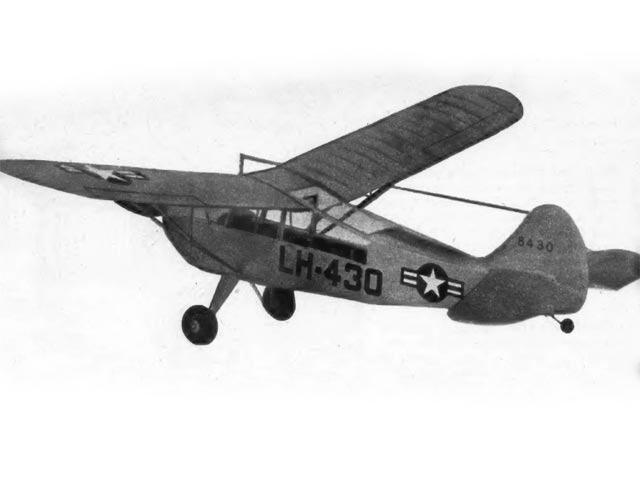 I remember this plane hanging from the wall in my father's room-shop. He made it from the same plans republished in half size on Italian magazine Sistema A.
pit - 18/11/2021
Add a comment