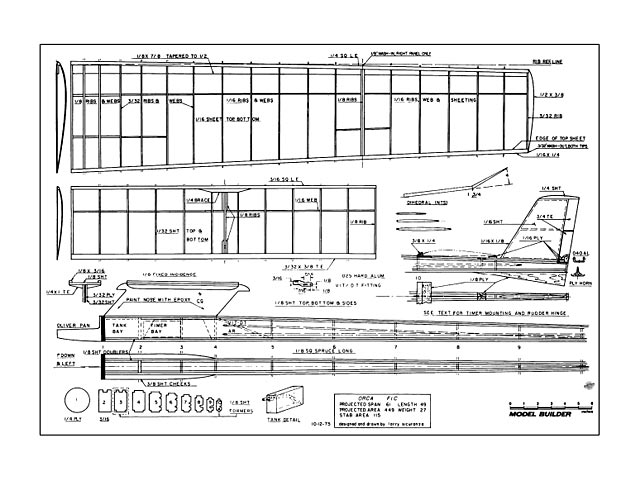 Quote: "This is not just a construction article. The author takes us on a complete tour of the FAI Power picture, and invites you into it. The tour is very well guided .. and the model's good too! Orca FAI Power, by Larry Sicuranza.

Swift and graceful, Orca moves with effortless power through its three-dimensional realm. Whether rocketing up in pursuit or drifting under the sun, its black and white beauty dominates the eye with sheer majesty.

The above describes the real animal, which I first saw at Marineworld. I was so impressed by this marvelous creature that no other name would do for my new FAI ship. It was already black and white for air and ground visibility and had a pylon shape similar to Orca's dorsal fin.

Unlike the real Orca, known to those who know nothing about him as the Killer Whale, the balsa bird has evolved through only six Marks in three years. This article describes the current version and ignores the others, as everything learned from them is used in Mk 6.

If you've read this far, it's because the photos attracted you, or you're already a FAlnatic, or you are thinking about maybe trying FAI Power. If the latter is the case, the only advice I can give you is do it! Try FAI. I got into it three years ago after reading the Zingo article in FM. I only wish it had appeared ten years ago! Up 'til then I'd thought that Power was too expensive, too difficult, too this or too that. Fish feathers! It's nothing of the kind. One thing it is, is demanding. None of the instant success or gratification so eagerly sought in our hollow society. You don't buy the pieces, assemble it and win your first contest. The planes are not easy to build - half-baked methods will not do the job. So if you aren't ready to earn the rewards with care and attention to detail, maybe FAI is too-too for you. Of course, any event can be equally demanding, if you intend to win.

This is exactly the point of this semi-sermon. If you are, or want to be, successful in AMA events, you can shut 'em down in FAI too!

I will now proceed to tell you how. Build an Orca. But first, a few hundred words on the stuff it uses. These come first because they affect construction.

ENGINES: There are no less than nine engines to choose from, ranging in price and availability from great to miserable (The new Cox .15, due to be released at any moment, makes it ten. wcn). The Rossi has been boss since it appeared and is my first choice (as of the moment) for performance and handling. I quite often hand-start it, and it never acts up. Availability is improving, thank goodness.

If you can't go the $75 for a Rossi, look at the Kosmic and the Taipan. Both are less expensive, easier to find, and both are good enough to win. They'll turn over 22 grand stock. A new entry is HGK but I haven't seen one run yet. Engines in the works are the OPS, the new KB, Cox, and the STX.

Two mills readily available but not competitive in stock form are the ST and KBS. However, you can send them to Ron Sheldon (the Pylon guy) and have him give them the treatment he gave mine. The KB is now turning near 22, and the ST is over that on the ground. Ron's address, and others, are at the end of this mess.

To make a long story short, there is an engine you can afford and get hold of, that is competitive. And remember that consistency is more important than top revs - every time.

MOUNTS: The engine you settle on will deter-mine the mount you use. There are five to choose from this time. For the Rossi, ST and Taipan, there are pans by Ken Oliver, Guy Shaw and ST. I like the streamlined circular section of the Oliver, but you might like the extra room behind the engine available in the Shaw mount. The ST is similar to the Oliver, but lighter and, in my opinion, more fragile. They all cost within pennies. of each other, but the ST is a little harder to find.

The other pan mount is by Tatone. It's the cheapest to buy, but often needs work to dress the mounting surfaces and clear the engine. For the Kosmic and KBS engines, the best mount is not a pan, but a machined forging by CB. It's big, heavy and nearly indestructable. I believe it was designed for QM Pylon racing, and provides the solidest mount of all. Also the least expensive. If the CB or Shaw mount are to be used, you'll have to deepen the nose of Orca to match. About an 1/8 inch or so.

TIMERS The choice of timer is improving, too, with Seelig and Monks foremost for automatic airplanes, and Tatone and KSB for conventional. I've built a couple in according with Bill Hunter's article in MB (March '75) and really like them. Took about fifteen minutes to make a flood-off for my A ship. Cost under $5 to boot... " 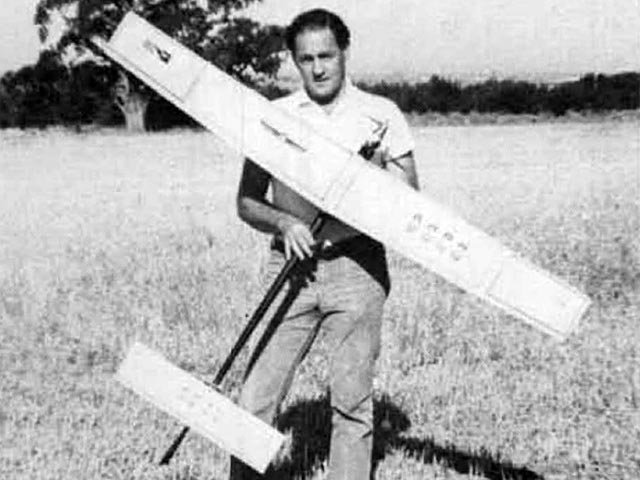