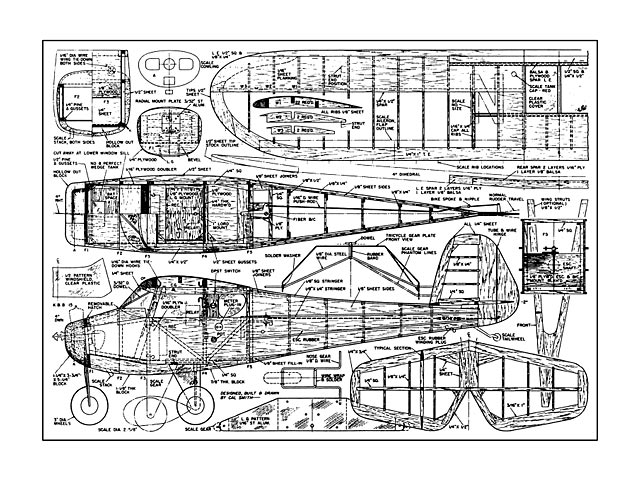 Quote: "Last of the Monocoupes, by S Calhoun Smith. You can duplicate this famous lightplane for operation by radio control; take your choice of trike or 2-wheel gear.

Airplane model builders have turned out innumerable versions of the Monocoupe since the big airplane first appeared in the early 30's. This fine little ship was a familiar sight around airports prior to World War II. There are quite a few still flying, but the modern trend to four-place aircraft has passed this aircraft over. Last built in 1948, the Monocoupe could boast of very good performance: top speed was 145 mph and cruising speed 135 mph with a Lycoming 115 hp engine.

Monocoupe models have always been fine performers, whether flown rubber or gas. The proportions are good for flying scale types, so why not an R/C version?

There are several departures from scale necessitated by good flight performance. Horizontal tail area is increased, although fin area is scale. Dihedral is 4° which may be increased slightly if the builder desires. The many sleek fairings and struts are omitted for simplicity's sake. Wing struts are only ornaments since wing support is self contained. Airfoil section is a thinned Clark Y 11% thick. Another item that is a builder's choice is the landing gear. Since the scale two wheel gear is pretty long-legged, a tricycle gear was fitted on the original model with good results. If you wish to stick closer to scale use the two-wheel gear and wheel pants.

There are several features used on this model which worked out pretty well in over 50 flights to date. The horizontal and vertical tail are cemented permanently in place. Stabilizer incidence angle is built in and weight is shifted for longitudinal trim. This eliminates any tail shifting with resultant trim changes. The cemented-on tail surfaces have resisted many hard knocks, and only a direct blow from the rear has damaged them.

The wing is tied down on the fuselage top with rubber bands inside the fuselage. This is a bit of extra trouble to construct but makes for a neat appearance. The Monocoupe has large windows overhead in the center section and these are simulated on the model with a sheet of clear plastic hinged at the leading edge. This allows access to tie-down rubbers and permits adjustment of receivers and relay without removing the wing.

Construction is very rugged throughout, and it paid off during many rough early flights, where radio troubles caused spiral dives or fly-aways ended in the treetops. The ship has taken some brutal bumps, but the structure has held together amazingly well.

Fuselage construction follows the 'Dagwood sandwich' or 'brick church' school of design. Plywood and Weldwood are generously used. Begin by building two open framework sides extending from F2 to F5 of 1/4 sq and 1/4 x 1/2 in stock. The plywood doubler is glued to the inside surfaces of the framework sides. Shape of plywood doubler is indicated by the unshaded area on plan side view. These two side assemblies are then joined by the plywood firewall, plywood and balsa formers at F3 and F4..." 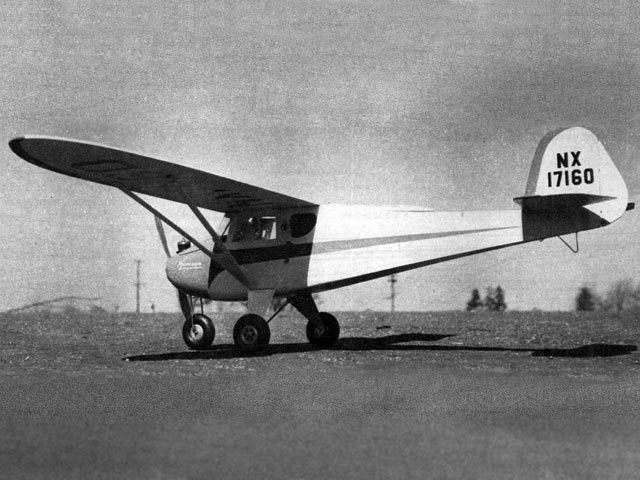