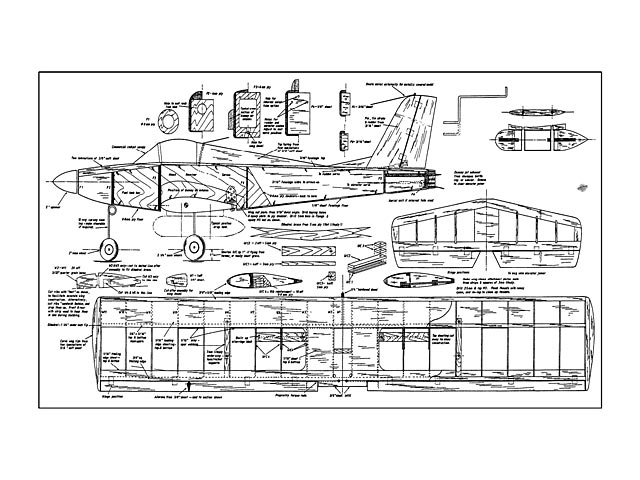 I would like like to start off by telling you about all of the protracted development of the Jetfire II. About the computer-generated wing section, test-proven in a wind tunnel, and explaining in full the complex mathematical formulae used in determining its exciting performance envelope, and it's advanced structural integrity - but I can't!

The Jetfire II is not really my own 'design' at all - more an evolvement of a series of nondescript sports models that took place over a period of several years. I cannot, honestly, put my hand on my heart and say that it was the result of mountains of research and development, aimed at producing the exact answer to a given set of modelling requirements, etc., etc, 'cause it wasn't!

What you have here is an accident of birth that came about as the result of my interest in small/medium-sized models. If you have read the rest of this issue, then you cannot but have noticed this interest! A lot of "20" sized models have fallen out of the end of my workshop over the years, from near scale jobs to mini-pattern ships.

Several of the sport models have owed something of their shape to these scaled-down pattern ships, such as the Flea Fli (oz7210), and the Bar Flea (oz2406) and as a result, they have always had some moderate degree of aerobatic performance. Many others came about because of my friendship with David Boddington, as a result of which several prototypes of his designs also emanated from the shed at the bottom of my garden.

Of course, with my penchant for spraying things, it will come as no surprise that I have always liked models that are scale, or look scale - and if you put these two factors together, what falls off the end is a Sunday afternoon sports model, that has a more than adequate aerobatic characteristic, and makes a passable attempt at looking a bit like some sort of fictitious fighter.

Let us begin. There is nothing clever or difficult about the construction of the Jetfire II - suffice to say that anyone who has built a couple of models should have no difficulty building this one. Also, from the flying point of view, it will satisfy most Sunday flyers, as it will adequately perform most of the regular aerobatic manoeuvres. Despite this, it is not a hairy beast, and is quite docile if flown that way. Previous versions have been used to teach novices from the standpoint of a first aileron model, to that of a first low winger, with great success. In fact, one now quite senior member of our club, who was convinced that he was not even close to being able to master low wings and ailerons (but we knew better!) learnt in a baptism of fire, when I walked away from the flight line leaving him in sole command - with the Jetfire 600 feet up.

Just follow the details on the plan, and all will fit together and just fly right. So, don't expect to read on and find a step by step account of how to stick part A to part B, but more some senile ramblings that might just explain the odd bit here and there!

The wings are of semi-symmetrical section (or bi-convex for the purists amongst us!), and were based on the well proven 'drawn round the sole o my wellies' theory, and have proven to offer vice-free handling over a number of previous models. They are completely conventional in design, featuring balsa ribs, top and bottom spars, etc.

Quite obviously, a foam wing of the same section and span will work as well, in fact I have made several, but, by and large, they have always come out a bit heavier.

However, I like balsa bashing - and the light weight that results - so that is the way that the Jetfire II is presented here. If you want to go the foam wing route, or to apply any other change, then please feel free to do so, just don't hold me responsible if things don't quite work out right!

Choose medium to light wood for all of the wing structure, except for the top and bottom spars, which benefit from being medium/hard balsa, and the dihedral brace, which is ply (real birch plywood, NOT lite ply!)

Make sure that the wing is built true, with no twists. This can be assured by cutting out the wing ribs, complete with the small support tabs, as shown on the plan - cutting them off when the basic wing structure is complete, and the top surface sheeted. Alternatively, and particularly if you cut out the wing ribs sandwich fashion, you can keep accurate alignment by propping up the front and rear of the ribs on rectangular section strip wood (also shown on the plan).

Wing retention is by virtue of the well proven dowel and bolt method and, while my own wing nut system is shown, substituting any commercial wing nut is totally acceptable.

Being a low wing model, the undercarriage is retained by clamps onto the usual wood blocks; however, in the quest for simplicity (and 'cause I have lots of offcuts of plywood in my scrap box!) these blocks are laminated from ply. Thin ply doublers are fitted, each side of the relevant wing ribs to carry the landing loads.

Of interest (but not essential!) are the underwing drop tanks. These are made from the centre of discarded toilet rolls, with a front and rear plug made from scrap balsa. They are attached to the under side of the wing by long 3 mm screws, that pass through the tanks and into the pick-up points in the under side of the wing. The pick-up points are from scrap pieces of 3 mm ply, laminated as shown. The holes for the screws are drilled and tapped 3 mm, then coated with runny cyano..." 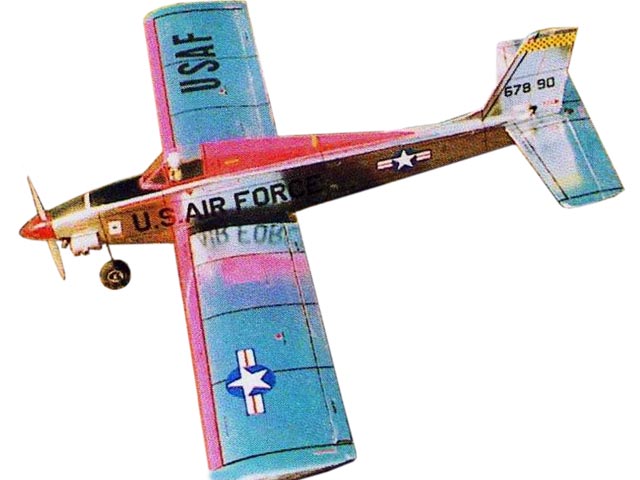