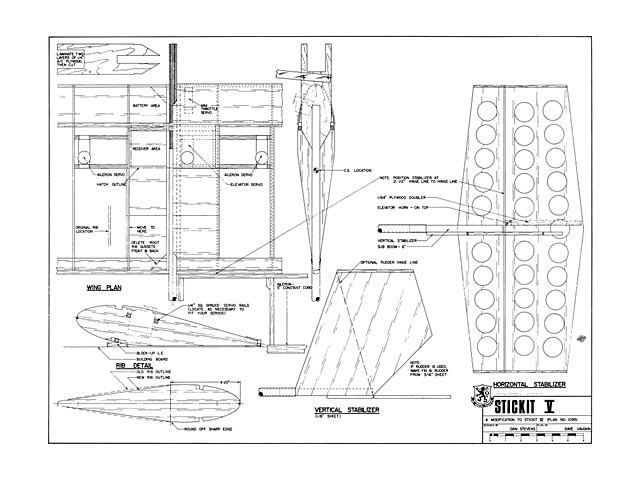 Quote: "If you're into competition fun-flys, this could be your key to the winner's circle! The Stickit V, by Dan Stevens.

The evolution continues, and I'm excited! If the Stickit IV has a fault, it would be that it is difficult to build weighing less than 3 lb 4 oz. The Mark V development concentrates almost exclusively on weight and picks up other attributes in the process. My prototypes have all weighed within 1/2 oz of 3 lbs, with no particular emphasis on wood selection - it's hard to be selective with mail order wood. What this extra 4 or so ounces means to you may be debatable. To me, they mean the difference between an acceptable looping touch and go, and an excellent one. The Stickit V is quicker in all aspects due to the new modifications. Here's what I've done:

(1) Thinned the airfoil aft of the main spar for a faster roll rate.
(2) Increased the aileron chord to 5 inches for a faster roll rate and more wing area with a minimum weight increase.
(3) More elevator area for better looping at low airspeeds.
(4) Shorter nose and longer tail moment for easier CG placement.
(5) No rudder, rudder servo, or associated pushrods, etc. The Stickit V spins well without rudder and can even taxi good enough to get from the pits to the runway.

The Stickit IV plans or kit can be used as the basis for a Stickit V with nothing additional necessary. Here's how to make the necessary changes:

First, the wing ribs must he modified. Measure back 4-1/2 in from the nose of the rib and draw a vertical line to the top and bottom of the rib. From this intersection, draw a line to the top or bottom corner of the rib trailing edge and cut this portion off (see drawing). Blend the resulting sharp edge between the old and new outline with a sanding block. Also. change the location of the servo rails so that the servos you are using end up flush with the top of the wing surface.

Second, while framing the wing, move the #2 wing rib inboard as shown, Also, make provisions to mount the micro throttle servo to the outside of the wing. Just add some plywood inside where it's mounted to accept the screws. Last, make the horizontal and vertical tail match the new drawings. It's okay to just turn the existing horizontal tail around backwards. but the taper allows more gluing area to the boom. All the other construction is as shown on the plans or instructions. It's also okay to use a rudder if you are so inclined, 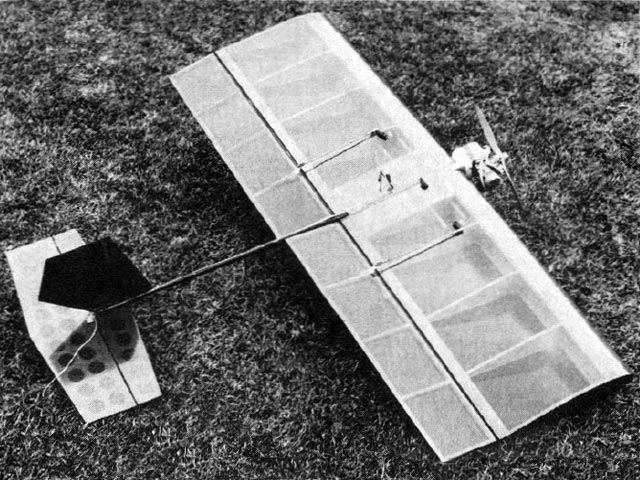