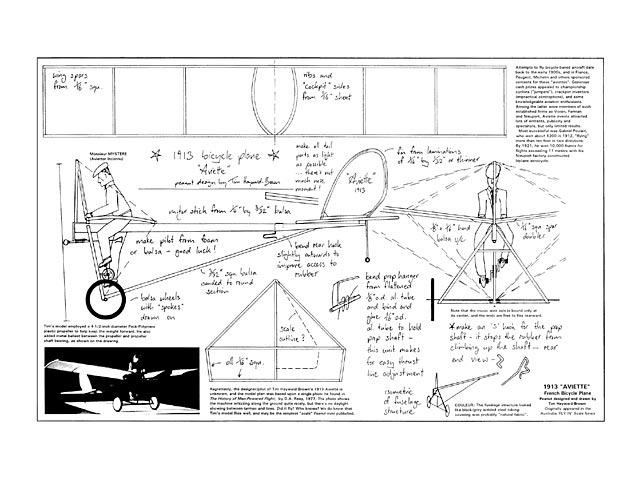 Tim's model employed a 4-1/2-inch diameter Peck-Polymers plastic propeller to help keep the weight forward. He also added metal ballast between the propeller and propeller shaft bearing, as shown on the drawing.

Regrettably, the designer/pilot of Tim Hayward-Brown's 1913 Aviette is unknown, and the model plan was based upon a single photo he found in The History of Man-Powered Flight, by DA Reay, 1977. The photo shows the machine whizzing along the ground quite nicely, but there's no daylight showing between tarmac and tires. Did it fly? Who knows? We do know that Tim's model flies well, and may be the simplest 'scale' Peanut ever published."

Note photo of completed model Aviette 1913 by Thayer was found online at http://www.gryffinaero.com/models/ffpages/models/ff2/aviette.html