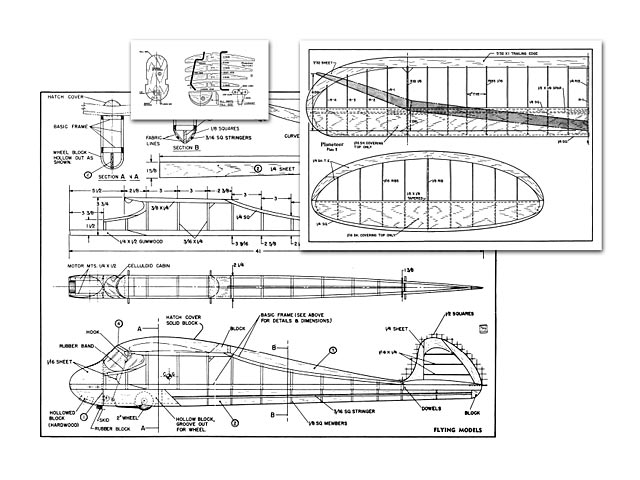 The Planeteer has been evolved from a series of new-rule models. In its original conception, the plane was designed with a wing loading of six ounces per square foot, using the basic twenty-nine ounces required by the Torpedo engine. This called for a wing area of approximately 700 square inches. The glide, as one can imagine, was simply out of this world. But of course, the power was inadequate to carry the model to a high enough altitude to hook a riser.

Next, a ship with a wing area of 550 square inches was built. This plane gave much better results. But, after exhaustive tests, we discarded it and designed the present ship, the Planeteer, which has a wing area of only 400 square inches, and uses the same power plant, a Torpedo 29.

The present wing loading is approximately 9-1/2 ounces per square foot which, for the present-day model, is a bit high. However, its performance will amaze even the experts. The climb is sensational, and the glide fast and flat.

The Planeteer represents a clean, simple, yet rugged airplane, a prerequisite for contest work. A highly efficient airfoil (Davis 5) is used, because of its high lift drag coefficient at low speeds.

The drawings do not locate the coil, batteries, etc, however the center of gravity is shown. Be sure to locate your ignition so that the CG will fall in its proper location.

A one-wheel retractable landing gear has been installed for those interested in competing for national records.

We suggest you use a dethermalizer on the model - the original model had to be chased cross country through cornfields, stone quarries, and over rivers on six different occasions.

A careful study of the plans will convince you of the Planeteer's simplicity, so what say we get into the construction.

FUSELAGE : The basic frame is built the same way as any other box-type fuselages. The two sides are built on the plan and joined as per top view. Be sure to cement all the joints securely.

The next step is to cut the plywood firewall. Slip it over the gumwood motor bearers up to the first upright, and cement. To make the installation of the landing gear easy, construct the bracket as shown on the plan and bolt it to the firewall with two 2-56 machine screws.

Cut parts two and three to the proper shape and cement in their respective positions on the basic frame.

At the front end of part three, which falls at the trailing edge of the wing, cement a fairing block across the fuselage and carve to the required contour and cross-section..."

Update 18/07/2021: Replaced article file with a complete version, thanks to RFJ. 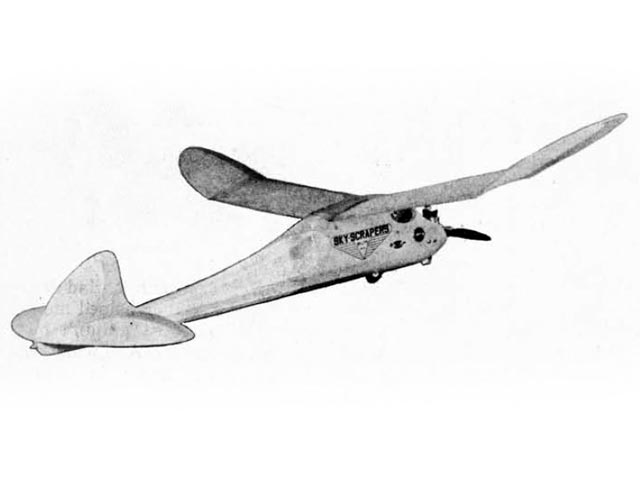 Does anybody have the final page or pages for the article? Page 55 is missing and there may be others. It would be useful to have the designer's trimming instructions.
Thanks, Simon
Simon Blake - 18/07/2021
Done :)
SteveWMD - 18/07/2021
Add a comment