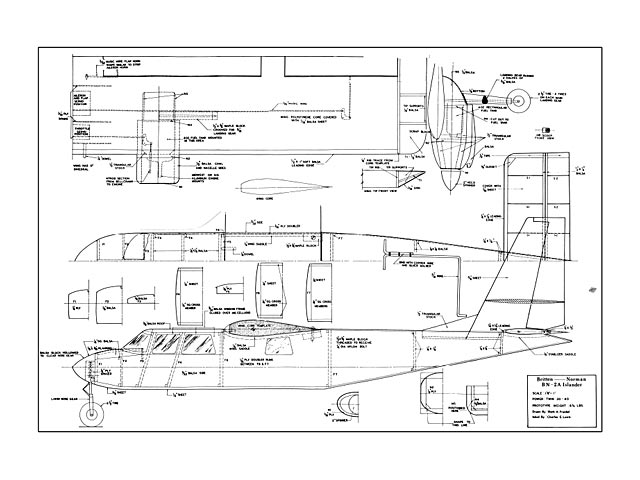 Quote: "Britten-Norman BN-2A Islander, by Mark Frankell. Twin engine scale projects are always exciting, but our long-legged bird has even more appeal with its large cabin area, good looks and believe it or not, model moments for stable, exciting flight under all conditions.

Like most modelers, I've always wanted to build a Scale twin but I could never find the right subject. Small wing areas, monstrously large fuselage and nacelle cross sections, as well as extreme thrust line locations dissuaded me from one design after another. For at least three years I searched for the proper subject, leafing through every general aviation magazine I could get my hands on, but no full-sized twin seemed right. All this time I was aware of the Islander, but I never considered it seriously. The Islander was too conventional; it lacked the glamour of a Cessna 310 or a Beechcraft Baron.

Finally, last Fall while sitting in ground school working on a wind drift problem, I noticed the student ahead of me reading the November 1971 issue of Flying. As luck would have it, this issue carried a striking centerfold photo of the Islander which rekindled my interest in a Scale twin. During the remainder of that evening my E6-B computer remained idle while I thought about more important things: how much wing area do I want, what sort of power is needed, what size tanks will fit in those nacelles, etc. My enthusiasm for the Islander was bolstered by the fact that the engines are located relatively close to the aircraft's center line, making single engine performance a joy. Furthermore the wing's long span and constant chord provide acres of area which also aids single engine performance by lowering the wing loading. In addition, the fuselage is almost rectangular in cross section, making construction a snap.

To date I have finished two Islanders. Each model weighs 8-1/2 lbs. The first uses a built-up wing while the second employs a foam wing. I favor the foam wing for strength and ease of construction; however, the built-up wing seems to dissipate engine vibration more effectively. Both of my Islanders are powered by OS Max 30's although 35's would undoubtedly be healthier. As I expected, the Islander's single engine performance is outstanding. Both of my aircraft have been flown numerous times with either engine out and I have yet to experience a control problem. While I wouldn't recommend taking-off with a dead engine or applying full power to a single engine when the model is near its stalling speed, the Islander is stable enough to turn in either direction regardless of which engine has failed. The loss of an engine in normal cruising flight is actually difficult to detect. If the noise from the Islander's engines is camouflaged by other models in the air, a drop in air speed is about the only indication of engine loss. Of course once you are sure that only 50% of the engines are functioning, it is best to plan a landing at your earliest convenience.

Engine failures are the exception rather than the rule, but it's comforting to know that the loss of an engine does not mean the loss of your model. Engine failures can be made almost non-existent if you eliminate dirt in your fuel by carefully filtering it. Reduction of vibration is also important. You will be amazed at how much vibration two .30's can generate and you will be further amazed at how destructive this vibration can be to the airframe, the radio, and the engines themselves. Careful balancing of the propellers (use only wooden propellers) and firm mounting of the engines will help minimize the vibration problem.

CONSTRUCTION: Wing and Nacelles: Construction of the model is highly conventional. I recommend that the wing be constructed first followed by the nacelles. Once the nacelles are joined to the wing, the entire unit is set aside while the fuselage and empennage are constructed.

The wing is started by cutting the cores from a two inch thick block of polystyrene plastic (foam). The ailerons and flaps are then separated. Next add the leading edge material to the cores and cut the appropriate grooves for the landing gear blocks, pushrods, bellcranks and servo wells. After installing the aileron and throtle hardware, the core is prepared for its 1/16 balsa skin. Sig's Corebond is an outstanding adhesive for the skin. It is a water-based contact cement that will not attack the polystyrene no matter how heavily applied. Furthermore, it provides an extremely strong bond and can be spread very thin, allowing great weight savings (heavy foam wings are usually the result of the cement used).

Once the skin is attached, the leading edge is carved to shape and the flaps and ailerons are checked for proper fit against the main portion of the wing. The wing tips are formed by cementing 1/4 in tip ribs in place (note that these ribs should be the exact size of the core templates; that is, 1/16 undersized in relation to the sheeted wing). T1 is then cemented to each tip rib at the angle shown on the plans. This is followed by the tip supports which are cut to size..." 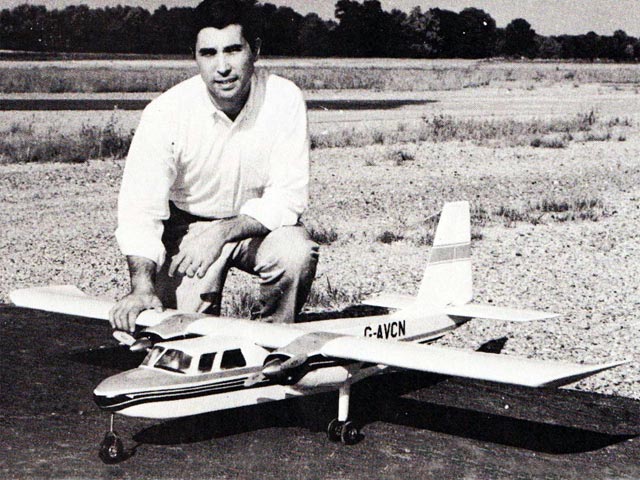