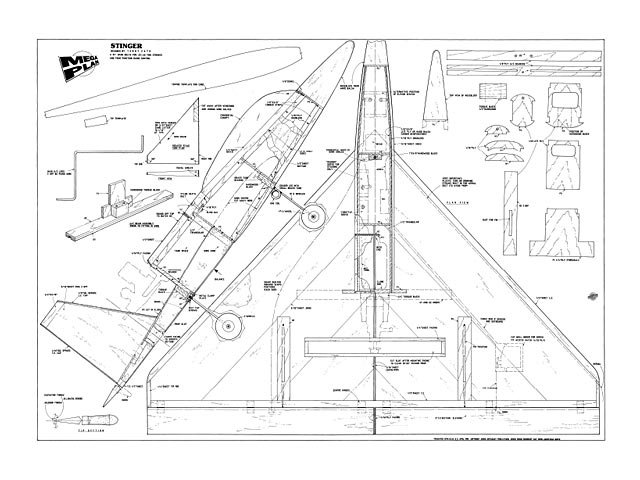 Quote: "The flip side of our free Mega-Plan reveals this dynamic delta. Stinger, by Terry Eato.

Why put the engine in the middle you may ask? Well why not? By doing this it has several advantages over conventional locations for the motor. To start with since the engine is well away from harm it is very difficult to break a prop. Most of the exhaust residue misses the model so it's cleaner at the end of the day. With the motor in the middle you can afford to have a long nose which takes away those orientation problems usually associated with pure delta shaped models. Added to all this the distinctive shape of twin fins and the lovely beating noise generated by the prop passing through the slot in the wing are guaranteed to turn heads at your local flying site.

Wing construction: This is very easy to cut from white foam by the hot wire method. If you can't cut your own and don't have a club member who can help then I am sure one of the foam wing suppliers listed in the classified ads will be able to help.

As the model has no tail and thus no elevator, it has to be controlled by tv. o control surfaces called elevens. They combine the function of elevator (both up or both down) with aileron (each surface moves in opposite directions) to give roll control.

Before joining the wings a decision has to be made on the control method for the elevens. You have the following choices.

Option 1 is the best since it gives very positive slop free surface control. Options 1 and 2 need transmitter or electronic mixing functions; if you haven't got either of these then option 3 is ok but keep the system slop to a mimimum.

If the servos are to be wing mounted then cut the hole on the underside for the servo and then pass a heated piano wire down into the foam core so that a hole is created forward of F2 into the servo cut out. This procedure is a lot less painful and easier than you think.

If snakes are to be used it is best to put them in before the veneer or balsa is added. If this is not possible then cut out a slim channel on the under surface and tack the snake in with epoxy. The slot can be filled with 1/16 balsa and then sanded to the original profile.

Join the wing halves with epoxy, noting that forward of F2 is removed so only tack the leading edge part of the joint to aid alignment. Add the 1/2 in sheet trailing edge and when dry carefully cut out the fuselage area forward of F2 from the foam wing..." 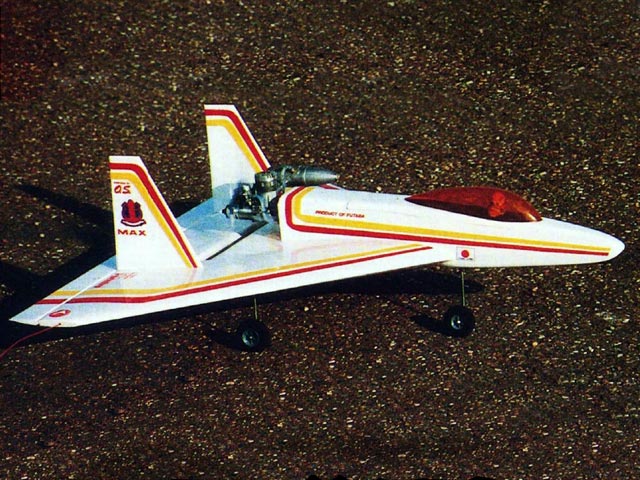