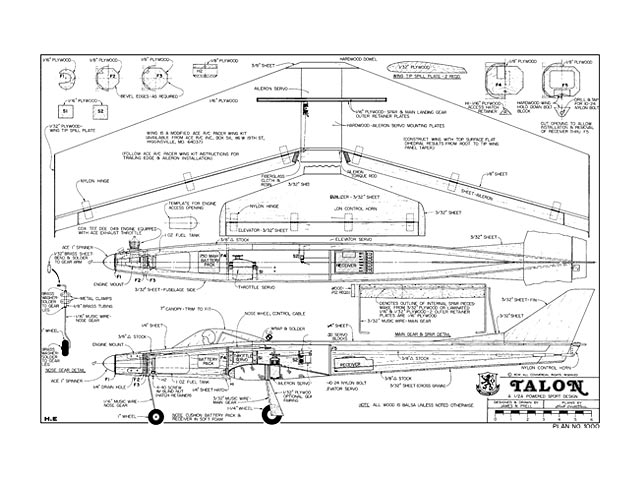 Quote: "With an Ace R/C foam wing, you can create this neat little package powered by an .049. It's quick and fun. Talon, by James N Prell.

My interest in 1/2A R/C began when I watched a .049 powered Pacer go screaming by. I was flying a .35 powered airplane at the time. Wanting to know whether this 1/2A was going as fast as it looked, I lost some altitude and started chasing it. This was a grand idea but I couldn't get anywhere near it! It was a little embarrassing to be outrun by something which was powered by an engine which I thought had been pulled out of one of those U-Control plastic ready to fly's!

It didn't take me long to purchase a Tee-Dee .049 and start drafting out a design for a 1/2A pattern airplane. The Talon is the result. The only improvement I can think of would be retractable landing gear. Wedging the nose gear up through the fuel tank is a problem though! If any of you fellow modelers can come up with a solution to it, let me know. The construction of this airplane is quite basic. If you have built any other R/C models, you won't have any trouble assembling this one. Cut all the parts out so that you have a 'kit' and assemble it no that it is lightweight but strong. The results will astound you!

CONSTRUCTION The glues I recommend are Titebond (or something similar) and epoxy. Epoxy use should be held to a minimum. The only places where I used epoxy were:

Wing: The way you put the sweep into the wing panels is actually quite simple. Lay the right wing panel (which comes from a Pacer kit from Ace RC, 116 W 19th St, PO Box 511BS, Higginsville, Missouri 64037) on top of the plans. Line the leading edge of the panel up with the leading edge shown on the plans. Using the point where the panel meets the fuselage, line your ruler up with the fuselage side and mark a cutting line. Do the tip by lining the ruler up with the 1/32 ply spill-plate. The left hand wing panel is done exactly the same way. The center fuselage wing panel is cut out of a constant chord wing section enclosed in the Pacer wing kit.

After all the wing panels are cut, take your ruler again and mark the placement of the slots for the main gear installation (I cut these slots with a Dremel Jig saw).

On the main gear of the first prototype I used 1/16 piano wire. After a few 'student pilot' type landings I quickly discovered that this wasn't strong enough! On the next model I used 3/32 wire and found that no matter how hard I bounced it in I couldn't bend it! In order to accommodate the thicker wire you will have to use two internal layers of plywood on the main gear laminations - one layer of 1/32 ply and one layer of 1/16 ply. The outside layers are both 1/16 plywood. When you epoxy the 3/32 main gear wire into place, make sure you rough sand it beforehand. The epoxy will adhere much better. After your gear laminations have set up and the epoxy has cured, sand the ends and epoxy on the 1/16" ply tip plates.

Follow the instructions in the Pacer wing kit when you install the trailing edge and ailerons. The wheels I used for main and nose gear are the diamond shaped type used on control line speed airplanes. They contribute much less drag than the balloon wheels we normally use. You will have to drill out the main wheels with an oversize bit (3/32 in).

The leading edge of the center section is self explanatory. After the glue dries, round it off to follow the contour of the wing. Drill a 1/8 hole in the center and glue the 1/8 wing alignment dowel into place. The nylon wing retainer bolt taps into a pre-threaded wooden block. I rounded the block off on a belt sander to get the shape that was needed. Remember - the only dihedral in the wing is that built in by the root to tip taper. You want the top of the wing to come out absolutely flat!

Note this plan scan has a blank centrefold section missing. If anyone can submit a clearer scan, that would be great. Steve. 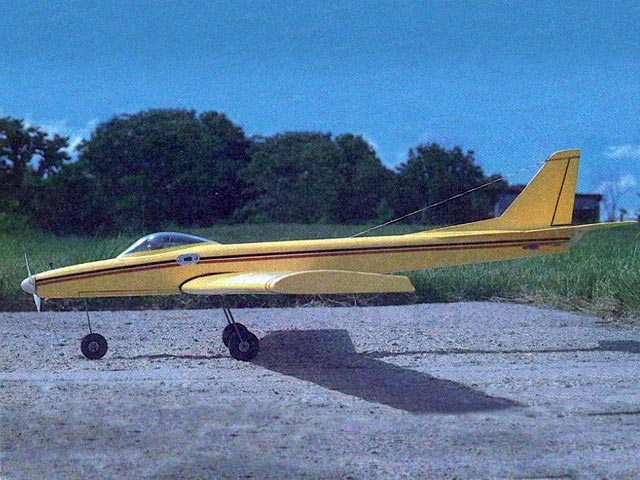