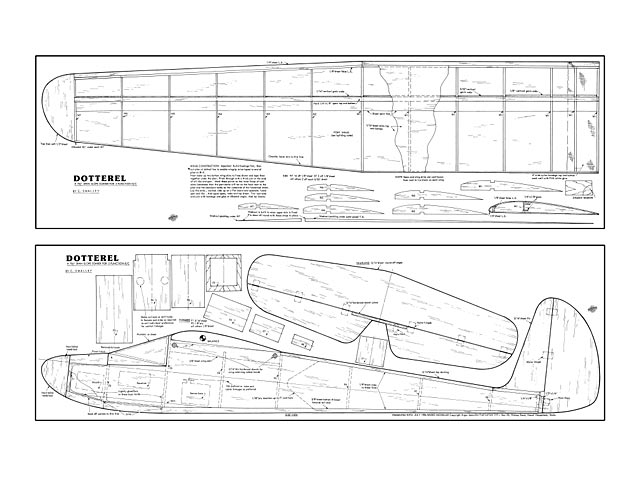 Quote: "Dotterel, by Clive Smalley. Looking around for a suitable name for this model I thumbed through a bird guide in search of birds that frequent hillsides. I came across the Dotterel, a name which to my knowledge has not been used for a glider before, unless of course you know better! It is a bird found in Scotland, Northern Europe and the mountains of Central Europe - and in wooden form at my slope site, too! The name is, for me, very apt as the guide book noted that the bird 'frequents grass covered rocky slopes and mountains above the tree line'; my slope has grass patches surrounded by many outcrops of chunky granite which attracts all models like a magnet, and there are also many trees at the bottom of the slope to spoil the airflow up the face!

The model is intended to be vintage-looking, say circa 1950, though it is not styled on any particular types, or did someone say, even styled?

Construction is very straightforward with the minimum number of parts for quick assembly. (The prototype took only ten months!). The wing, having compound taper, requires a bit of care when applying the top skin to build in the correct washout, which is essential. Jig strips are shown on the plan to simplify this stage though I will detail the wing construction method. There is ample room in the fuselage for any R/C gear including the earlier bulky sets, and also plenty of room in the
nose for a 500 Ni-cad pack for those long flights. Simple wing struts would have added to the character of the model but I omitted these on the grounds of simplicity (mine, not the model's), and the risk of poking a hole through the wing on my less than perfect landings.

Fuselage: The two fuselage sides, doublers and stiffeners are glued up in the usual way and joined by formers F2 and F3. Pull in the nose and add former F1. Similarly, pull in the tail and glue with the 1/ x 1/8 in strip. Add the wing runners, nose block, nose top sheet and nose lower sheet back to F2 position. Add the top rear decking. Install the rudder and elevator cable outer tubes and fit the rear underside and sternpost block. Lightly glass-fibre the inside of the nose area for strength and to prevent "bursting" in the event of a hard arrival. Drill the wing dowel holes. The cockpit canopy/hatch can be made either from 1/8 in sheet or with a frame of 1/32 in ply with acetate panels. I used all sheet. Spot cement the hatch in position and now enjoy yourself carving and shaping the fuselage. Sand smooth.

Tail unit: Cut out from sheet and sand smooth. Join the elevators and hinge both rudder and elevator. Glue the tailplane
to the fuselage and the fin to the tailplane. Check to set square in plan and front views.

Wing: The wing is built in left and right hand panels, disregarding the change in planform. Cut out the lower skins to the planform minus the 1/2 in leading edge. Mark on the spar and rib position, followed by the ribs, upper spar and sub-leading edge. Don't forget to set R1 at the dihedral angle. Cut out the jig strips and position over the trailing edge and R7 positions. Pin down the wing assembly and glue all spar webs in position. Make up the top skin slightly oversize to allow for the rib curvature. Using PVA adhesive, glue the top skin in position, ensuring the wing is firmly pinned down to the building board and jig strips.

Allow to dry for at least 24 hours. Despite the compound taper, no difficulty should be experienced when the top skin is fitted, or else I was just lucky! When assembling the second panel, use the same jig strips to ensure equal washout is built into each panel.

Add the 1/4 in sheet leading-edge and tip blocks. Carve and sand to shape. Fit a hardwood strip into the trailing edge centre to prevent the rubber wing retaining bands cutting into the wood. Join the wing panels and reinforce the joint with nylon bandage soaked in PVA adhesive. Finally, complete the overall sanding to a smooth finish.

Finishing: Any finishing method can be used but keep it light. The prototype was covered in doped tissue and painted with a car cellulose aerosol spray. The canopy was painted to contrast.

R/C installation: The ni-cad can be poked into the nose followed by the Rx and switch beneath the hatch; the two servos fit side by side under the wing. Trail the aerial from the hatch top to the fin. The all-up flying weight of the prototype was 28 ozs giving a wing loading of 10 ozs/sq ft. It could easily be built to less than this with modern R/C gear.

Flying: Test fly with the cg position no further aft than shown on the plan-slightly in front is OK. Wait for a day when the wind is blowing around 8-12 mph reasonably directly on the slope face. Give a good push out with the wings level, slightly nose down, and grab for the sticks. Nothing dramatic should happen but it pays to be ready! Once the 'feel' has been obtained, the model can be flown in stronger winds, but it really is at its best on a calmish day when the vintage appearance can be more readily appreciated at closer quarters.

What else can be said about flying a basically simple two-function sloper? As a relaxation from the demands of powered scale models, the quiet, gentle `no hassle' two-function glider gives me a great deal of pleasure. Go have some fun. Cheers!" 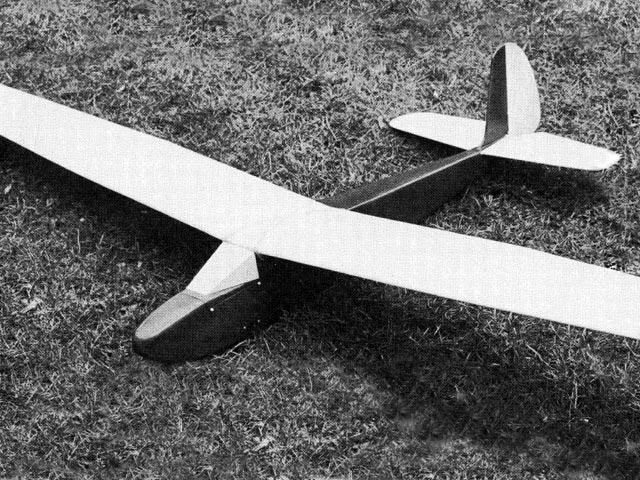 Hello, Model looks like a "Weihe" with a different canopy. The german name for "Dotterel" is "Schwarzstirnregenpfeifer". First, whe I read the name Dotterel, I thought of a small bird of prey...
Reinhard Lehmann - 09/07/2021
Add a comment