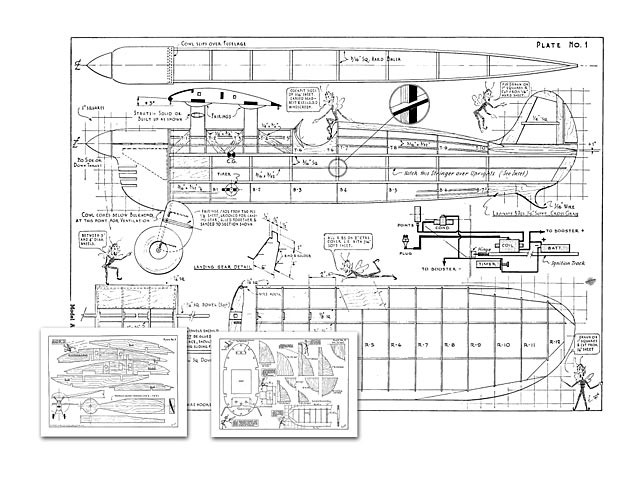 Quote: "THE Falcon is the outcome of careful adherence to the laws of model aerodynamics. The ship was originally designed for Class A competition. Performance was almost phenomenal. Even now, after nearly two years of hard use, it can and does outfly many of its competitors. It is completely stable and may be flown in tight banking circles without the slightest danger of spiralling in.

The first of the Falcon series designed for Class B motors distinguished itself by establishing something of a record in its first competition. It stayed in sight for seventy minutes before it was lost for good and that with a six-second motor run on a preliminary test flight.

CONSTRUCTION: First enlarge the plans on thin light-brown wrapping paper, use an HB or B pencil kept constantly sharp. When that is done, melt some grease, bacon fat will do, and spread it over the drawing. This prevents glue from sticking and furthermore renders your efforts transparent, particularly useful for the wing which will be constructed half on one side while the other half will be built on the back of your drawing. Of course, if you believe in making things easier, a few cents will buy a large sheet of regular tracing paper.

Start the fuselage by laying 3/16 sq hard stock over the top or plan view. Make top and bottom frames one over the other and when set, split apart. Cut seven upright members all exactly 1-7/8 in long. Then assemble the basic structure complete with shaped tailstock in place.

Before putting in the 3/16 x 3/32 stringers secure the landing gear to the aft side of the bulkhead as shown. Lock washers should be used and, as an added precaution, a sizable quantity of cement over each nut so vibration will never loosen them. Secure the two bolts for attaching firewall firmly in place according to instructions on Plate 2. Install all stringers except those between T-1 and T-5.

Cabane struts are best made up as indicated on Plate 1. They are both stronger and lighter than solid struts so a little extra effort makes them worth while. Make one strut 16 long. After it is sanded to shape, dope and bind with silk or paper and cut into four equal parts. Assemble struts into two pairs, mitered at their bases and glued together to form a V with the arms 3-3/4 in long, spread 5 in apart at the top.

The cabane struts are glued firmly between formers T-1 and T-2 and between T-3 and T-4 respectively. The units are then secured to the 1/16 sheet floor, braced in the location indicated and the whole assembly coated generously with cement.

If the struts are carefully made and well fitted, they will be so strong that nothing short of deliberate sabotage will wreck them and, as a well-made Falcon will not have any serious crashes anyway, don't worry about a complicated future repair job.

WING SURFACES: Start by making templates of the wing ribs. This is best done in the following manner:

Lay Plate 3 face down on a sheet of stiff drawing paper, rub over the back of the page with a hard, smooth, object - a toothbrush handle for instance - being careful not to miss the rib outline. Enough of the printing ink will be transferred onto the drawing paper to give a clear image of each section. When these sections are carefully cut out, you will have an accurate and very serviceable template. The advantages of this method are obvious: no inaccuracy from tracing and your copy of MODEL AIRPLANE NEWS will not be mutilated.

The trailing edge is first notched on exact 2 centers with two hacksaw blades bolted together. This will make a cut 1/16 wide. The notches should be 3/16 deep. Do not taper the trailing edge until the wing is complete.

Lay the notched trailing edge in place over the wing outline and pin down after raising the bottom inside edge 1/16. Set the ribs into the trailing edge then cement the 1/4 square leading edge in place. Cut out and assemble the tips. When dry, glue into place raising the extreme tip 1/2 above the trailing edge as shown in the front view of the plane on Plate 3. Lay in the 1/8 square spar and cover the leading edge with soft 1/16 sheet. When the cement is thoroughly dry - at least six hours - remove from the drawing and press the two deep spars into their proper place on the underside of the ribs. Pin the wing down again and allow another four hours to dry..." 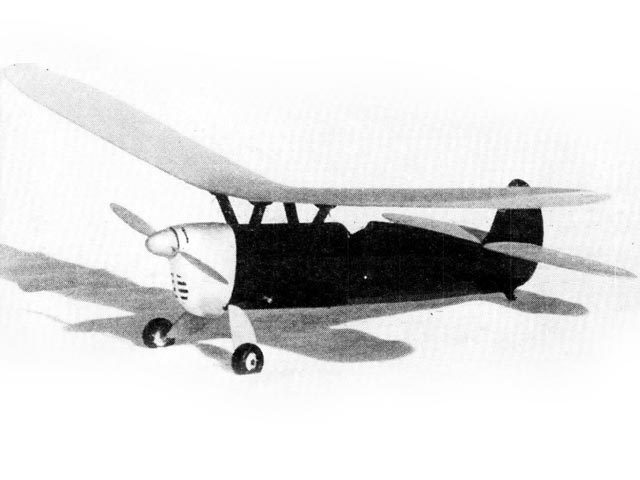