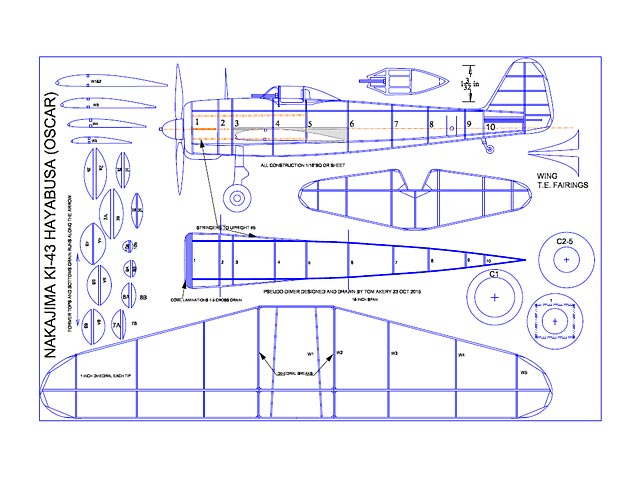 Quote: "This is a personal favorite model of mine, another great design by friend Tom Akery, pseudo-dimer (16 inch wingspan) and a real eye-catcher. There’s just something about that color-scheme, HQ chutai 20th sentai, IJAAF that jumps out at me…Nakajima Ki-43 I Hayabusa (OSCAR). A word of note: In his rush to get the plan to me, Tom positioned the wing a bit higher than on the actual aircraft. No matter…easily lowered during construction. Tom has since redrawn this plan (a number of years later) but since this was the original that I worked from…here it is. I love this model…and Tom’s design work.

Researching a model during construction is a point of enjoyment for me and generally, I like to build with a theme in mind. As I recall, for me, the Hayabusa was “The Zero that wasn’t.” While the Mitsubishi Zero was heavily armed, the Hayabusa was anything but. On the other hand, it was far more maneuverable than any contemporary aircraft in the air…and remained so to the very end of the war. Major Thomas McGuire, one of America’s highest scoring aces in the Pacific Theater lost his life while attempting to turn inside OSCAR at low altitude. How many Allied aviators, at first glance, thought they were dealing with a Zero…only to discover belatedly they were attempting to dogfight with OSCAR? In spite of its ever-increasing design shortcomings, the little Nakajima fighter was the ultimate dog-fighter…from beginning to end. If ever there was an enemy aircraft that called for use of a hit n’ run tactic, it was the Nakajima Ki-43 Hayabusa. Watch your “six” and don’t mess with OSCAR!

Thanks Steve and Mary for your work and dedication!" 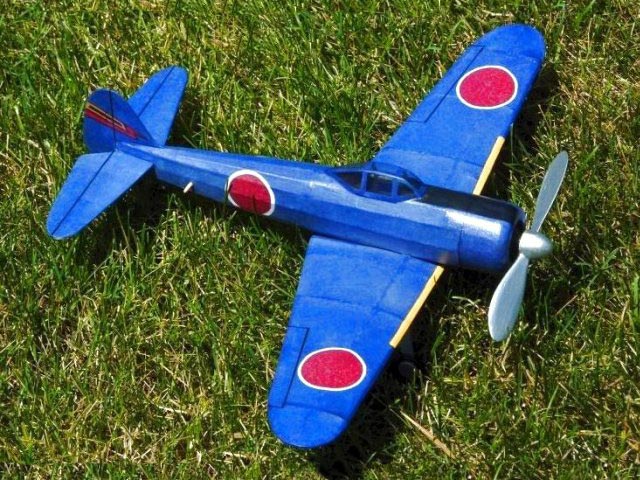 Another Akery plan, simple but very effective and accurate in outline. I know the Japanese Air Self-Defence Force (JASDF) aerobatic team is named the Blue Impulse* (Buru Inparusu, God bless the Japanese language!), might this flamboyant Ki.43 be a forebear?
* https://en.wikipedia.org/wiki/Blue_Impulse
https://aerobaticteams.net/en/resources/i67/Blue-Impulse-Mitsubishi-T-2-Gallery.html
Miguel - 03/07/2021
Add a comment