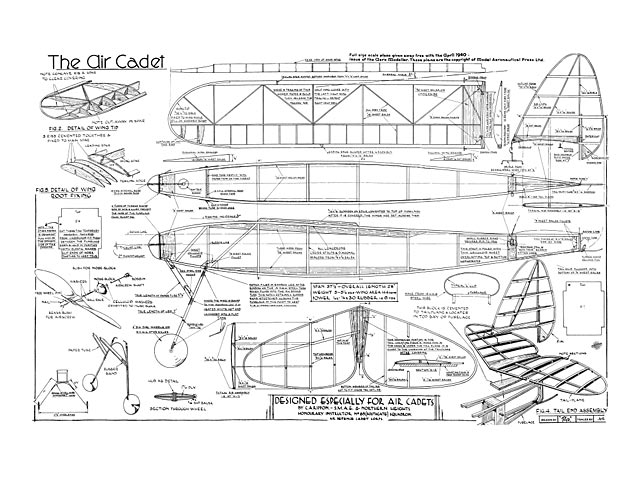 Introduction. Those of you who are in the Air Defence Cadet Corps know that the Corps came into existence to help you learn something of the mysteries of aviation, the Royal Air Force, and the industry. A taster, as it were, of all the interesting features. After you have been in it for a while you wilt find yourselves attracted to one or other of the specialised branches, and maybe you will eventually join the ranks of the Royal Air Force, or enter the industry with your minds made up as to what branch you want to follow. In other words, while an Air Cadet, you serve a form of elementary apprenticeship, and, if I may say so, from my own observations, a very enjoyable one.

Well, to enter the ranks of successful aero-modellers you must follow the same lines; however much you feel you would like to see a miniature Hurricane or Wellington of your own conception in the air, to be successful you must serve an elementary apprenticeship and 'make haste slowly'. So often do I see really smart flying scale models, which have taken literally months to build, put into the air to make one or two feeble attempts at flight, and then - curtains!

It is, of course, natural that a newcomer who knows none of the pitfalls should look askance at some of our general flying models, and exclaim that they are 'not like aeroplanes', and that they have no wish to build and fly anything but models that look like the real thing. Quite so. But many would not have met with disillusionment and disappointment had they started in a simpler fashion and, of course, we know that there is a definite place for the duration 'plane as well as the flying scale model. No one in his senses decries the racing shells of the Oxford and Cambridge crews because they are not in the fashion of the Queen Mary or HM battleship Rood, and after all, even as the Oxford and Cambridge crews, for no apparent reason, other than one of sportsmanship, attract nation-wide interest from people who hardly trouble to know which end of a ship goes first, so do the Coplands and Dick Kordas, and other high lights of the duration world, hold the limelight in the face of the flying scale giants.

So if you want to cash in on successful model flying of any type, you've got to start with something simple, and learn one thing at a time. The first and foremost objective is to see your model fly, and when you have had some considerable experience with duration models, you can then approach the problems associated with the more complex flying scale models with confidence and a sound appreciation of the magnitude of the job.

Therefore, the model I am about to describe is the starting point, and it has been produced with a view to introducing you to sound principles of design and building technique, and will, even if not perfectly built, give satisfying results. Nothing has been included that is not doing a job, all frills being rigidly ignored, and the methods of assembling the various portions are the result of careful and close study of the beginners' difficulties learned from my close association with their problems.

As there is a possibility of a shortage of certain materials I should like to say that the model may be built with alternatives, such as silver spruce, pine, whitewood, and even birch, but the duration performance, due to heavier loading, in all probability will be less. The Model, as constructed in balsa wood, has been stressed for silk covering so that those who desire a sturdier and more durable job may use the silk, the slight additional weight being to ounce. at the most. Now, before I go on to instruct you further, note these few remarks:

Study your list of needed materials, and compare them with the details on. the white print. Remember, speed in building is not in itself meritorious; tags pains and see that the work is sound, and, above all, do not remove work from the board until the glue is perfectly dry. Procure a board (preferably whitewood) without knots, about 30 inches x 6 inches, or long enough at least to take the job, and see that, this board is really true and not warped in the length or hollow in the width.

Make up your mind, even if you have built models before, to follow my instructions and sequence explicitly, and I am sure that you will turnout a first-class job.

Do not actually build your parts on your print, but make a tracing of each part, cover the tracing with waxed paper, and work upon that. This method avoids you spoiling your print, and allows you to check up your work with your print while doing it.

Remember, that good work is never 'near enough'; it's right. In other words, near enough is not good enough.

The Air Cadet is a high-wing tractor monoplane. and has features that make it possible for it to be packed into quite a small carrying box, very useful in these days of gas mask cases, etc, lumbering up buses!

The model is designed to a set of rules which has proved very popular and successful in my own club The Northern Heights, and is receiving the blessing of the SMAE this year, for it will form the basis of one of the Society's decentralised contests. This is the specification called for..."

Quote: "Hi Steve & Mary, First off, I would like to thank you for running such an amazing website. Outerzone is an invaluable source of information and inspiration. Recently, I was browsing the OZ to find a nice sturdy vintage rubber powered model to build it with my daughters. Hand launch gliders are not so interesting any more ;) They would like to build something with a prop. Air Cadet seems a nice option to consider.
After checking the available article for the Air Cadet I noticed that the instructions are incomplete. There should be a second set of instructions that were published in the Aeromodeller, May 1940.
Please find the attached second set of instructions along with a photo of the original plan [see pic 005]. I managed to find them over here: http://www.antiquemodelaircraft.co.uk/rippon-c-a.html
Kind regards, Dejan" 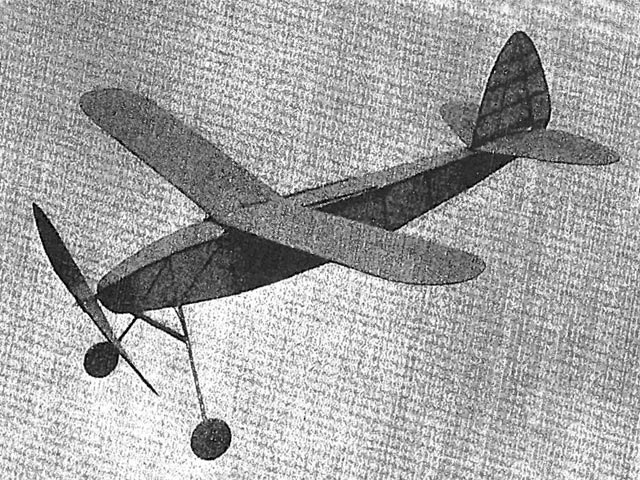