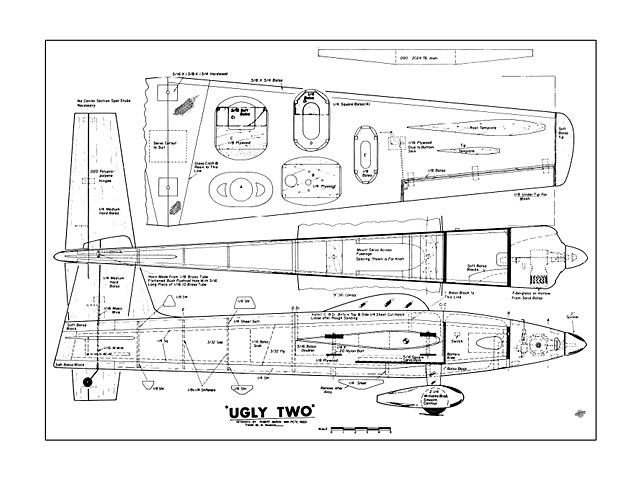 Quote: "Attention R/Cers: Not all U-Control fliers are less than the full pound! A dangerous statement to make in this spot but in this case demonstrable. In support of this radical position I offer the following.

Early last winter we were trying out our new flying site, a sod farm. Imagine, you East Coasters, 25 acres of grass mowed 1-1/2 in long once a week by someone else! As you can guess we had guarded the location of this site so well that only 20 percent of the club members knew where it was! We rather winced when a modified Volkswagen hauled up and disgorged a bouncy male type who announced that he flew model airplanes too - U Control.

In the usual slack air time we found that the Ukie type was a transplant from C-a-l-i-f-o-r-n-i-a, that his name was Bob Baron and that he had a .19 powered stunt ship he flew on 70 foot lines. This almost finished our relation-ship right there because everyone knows that you can't fly that kind of thing in competition and do any good!

Being from 'that place' Bob didn't surface again until the weather turned warm but when he did, he had this improbable stunt ship which he proceeded to demonstrate. We were shocked, a full sized stunt ship with a .19 and going like the hammers of hades. We now began to have what the literary types would call meaningful dialogue on the subject of R/C airplanes.

It turns out that Bob is an aerodynamicist by education with absolutely zero knowledge about R/C and since I am an R/Cer with absolute zero theoretical knowledge about aerodynamics, I began to press for information. Pretty soon the subject got around to Formula racing and Formula II in particular. I outlined the rules and got the reaction that they were pretty stupid (so far as the prototype category is concerned) and didn't leave too much to the designer. The session ended by my invitation for him to drop over to the house to take a crack at designing a racing machine within the prototype class rules.

Our design sessions were pretty wild. Bob would start out by telling me vhat he would like to see from a theoretical point of view. Then I would tell him what I could live with from a practical standpoint. Bob was quick to tell me that he had no idea what the result would be when he started or at least what it would look like. When we finished the result is as shown on these pages and Bob's explanation is as follows.

The mid-wing configuration is used to eliminate the tendency to snap roll in a high banked turn and also to enable the plane to fly with no back stick pressure. Both the snap roll tendencies and need for constant backstick pressure are characteristic of low wing stunt/ Class II planes when flown at typical racing speeds of 100+ mph. No engine offset or decalage is used since the angle of attack at 100+ mph speeds is too low to be accurately built-in. The final result justified the above assumptions since the airplane cannot be snap rolled in a full power 90 degree banked turn, flies level with hands off, and requires minimal pitch trim.

The tail areas and moment arms are along the lines of the classic multi stunt plane which insures adequate stability and turning ability. The nose moment arm is calculated to position the center of gravity (CG) properly with little or no ballast (none was used on the original ship). The last consideration aimed at improved handling qualities is the use of a wing which stalls gently with no tendency to fall off on a wing tip. A high aspect ratio wing with a moderate leading edge radius and low wing sweep coupled with one degree washout per panel gives the desired low speed handling characteristics. A sharp wing leading edge causes early separation of the flow over the wing and results in an abrupt -stall. The drag reduction of a sharp leading edge is negligible compared to the skin friction, profile drag, and parasite drag. The wing washout (twisting the outer trailing edge up with respect to the inner one) causes the outer portion of the wing to fly at a lower angle of attack. Since the airfoil is similar all along the span, the inboard portion of the wing reaches its stalling angle of attack before the outboard part. The net result is that the tips continue to lift even though most of the wing has quit. Hence the wing does not fall off on a tip at stall.

Now that we have designed the perfect handling airplane (well, almost) we need to reduce drag to beat those not so perfect aircraft that go like smoke. The drag reduction program was initiated with the wing.

A seven-to-one aspect ratio was chosen as a good compromise between minimizing induced drag (drag due to lift) and insuring structural integrity (fancy phrase for 'Will the wing fold?'). Aspect ratio is defined as Span squared divided by Area. The induced drag is inversely proportional to aspect ratio. For example, a 4:1 aspect ratio wing has twice the induced drag as an 8:1 aspect ratio wing. This induced drag becomes important in the turns where a plane can be pulling as much as eight G's and hence eight times the normal lift drag. Outboard ailerons (no differential travel) are used for minimum drag. The taper ratio (tip chord/ root chord) of .5 gives a straight wing induced drag that is within 1% of that of an elliptical wing without the structural nuisance of the latter.

The modest sweep of the quarter chord gives the most efficient wing over the speed range used and has very good stall characteristics. A swept wing has more induced drag than a straight wing of the same area at the relatively low speeds of models. The only advantage of the swept wing is that it allows a shorter nose moment arm since the center of pressure of a tapered wing is moved aft with respect to a straight wing.

The method of nose moment determination will be discussed later along with weight control. A 12% airfoil is needed to make the Formula II thickness rule and also happens to be a nice number. Dihedral of one inch per panel (an educated guess) has been found to be quite adequate.

The fuselage although appearing somewhat pregnant is really quite clean aerodynamically. There is a smooth, continuous flow over the body with minimal intersection drag. The cooling is such that there is a minimum of dead-headed flow while providing sufficient cooling of both head and crankcase. The fuselage cannot be made appreciably lower in frontal area without falling outside the Formula II rules..." 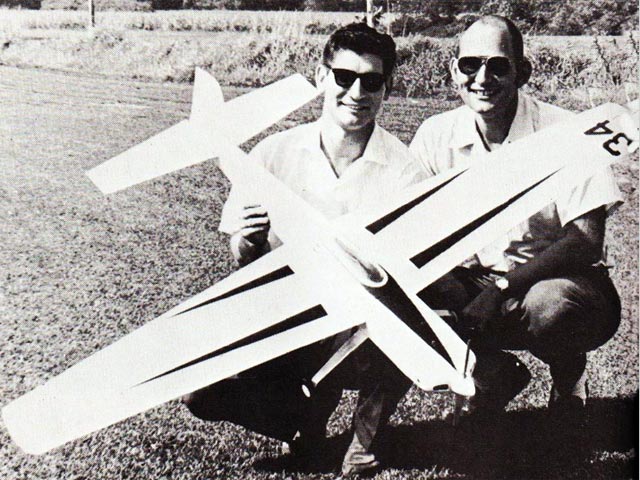