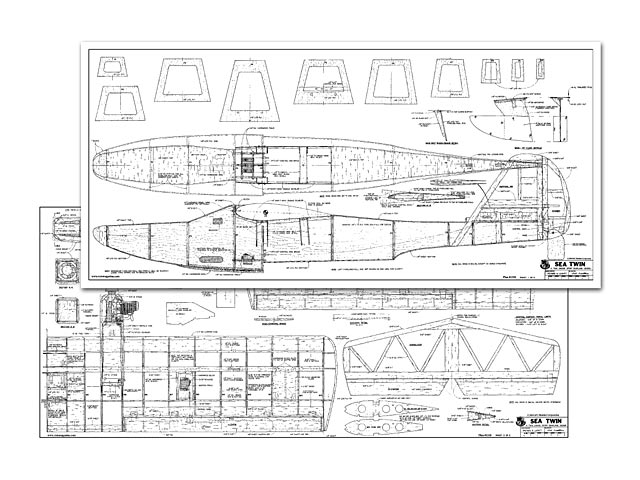 Here is a project that is so much fun that it is probably against the law in several states. While you're at it, you might even gain a new experience or two. Three things that many modelers have not done, but always plan to do, are (1) scratch-build a plane from plans, (2) build a sea plane, and (3) build a twin. Here is your opportunity to do all three at once. The Sea Twin is easy to build and flies so realistically that it always draws a crowd. Two 56 size 4-stroke engines pull the 16 pounder around with authority for gorgeous take-offs and splash-and-goes. It very nicely performs mild aerobatics such as loops and rolls, but it is mainly built for full-scale-like flight.

Inspired by the great little Ace Seamaster 40, ten years ago I scratch-built a similar airplane with an 8-1/2" wing, powered by a single Super Tiger 3000 mounted on a pylon. I used 1/8 mahogany plywood door-skin for the fuselage and ribs, basswood spars in the wing, and happily flew it for a number of years.

Three years ago, my good friend Butch Mallam offered the loan of two OS 91 4-strokes that were not in use, so I sawed off the pylon and built nacelles. A twin was born. The twin flew so well that there have been three copies made by friends. However, the 100 inch one-piece wing is hard to get into my van, so this new Sea Twin is a 90% copy with further updates.

I have been accused of building heavy (and strong) so I'm sure that lighter material and finishing choices could save a pound or two. This model uses door-skin for much of the hull and some of the ribs. The door-skin can be ordered from your local home-improvement store. You want the 2.5mm birch and mahogany ply, which goes for about $20.00 for a 4 x 8 ft sheet, but probably will have to be special ordered. In place of the door-skins, you can use lite-ply, which is lighter but a bit more expensive.

Lite-ply is available in sizes up to 12 x 48 in from the balsa supply houses that advertise in this magazine. If you are going to build big airplanes in the future using plywood and basswood spars, the two handiest tools in the world are a small 9 in handsaw and a small bench sander with a 1 inch belt and 5 inch disk. These sell at the home improvement store or the Harbor Freight Catalog and I make 90% of my cut-and-fits with them rather than blades and razor saws.

CONSTRUCTION: The Wing: The wing ribs are all identical, 8 of plywood, and 17 of 1/8 balsa. Stack, bolt together, and cut out all of the plywood ribs at one time on your bandsaw and sand them smooth. You can notch the ribs for the spars with multiple cuts of the bandsaw, but keep a tight fit for the spars. Repeat for the stack of balsa ribs. 14 of the balsa ribs will have 2-1/2 in of the trailing edge cut off where the ailerons mount.

Cover one wing plan with wax paper, pin down the bottom main spar on the plan and position the aft lower sub-spar, raised up on 7/16 scrap blocks. The first couple of ribs will set the angle of the sub-spar. Note that all spars are basswood, and the LE and TE are balsa. Glue the #2 rib to the two spars, and at the same time, glue on the wing web going to rib #3. On rib #2, don't glue it to the front and back of the main spars, as you will need to cut away some of that rib later on when you are inserting the dihedral splice plates..." 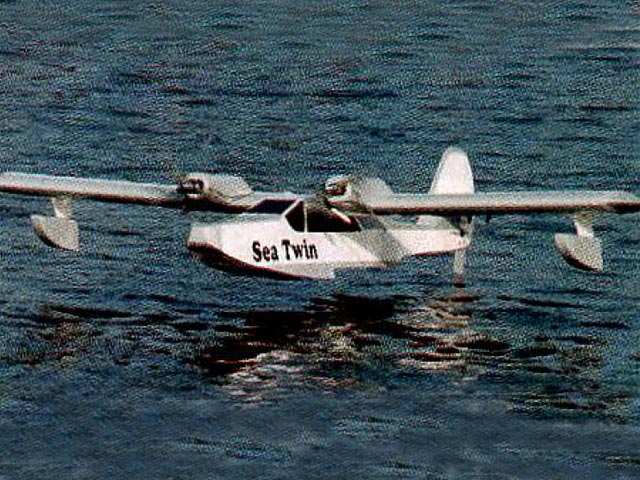