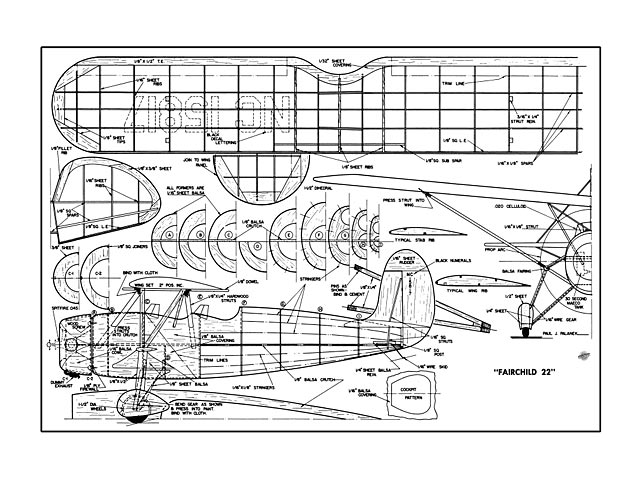 Quote: "The Fairchild 22 offers an ideal layout for a flying scale Half A. With the Baby Spitfire for power, a wing area of roughly 180 square inches, this job is really on the ball. Try it and see.

Our model is a replica of one of Fairchild's famous airplanes, from the good old wood glue days of 35. Our reason for modeling this type is the ideal arrangement of surfaces for FF work, along with a fairly good nose moment.

The prototype had tandem seating in open cockpits with dual controls. The wing structure was of spruce with aluminum compression ribs, and ailerons covering most of the trailing edge. The fuselage was entirely of welded tubular structure, fabric covered. The tail unit also had steel tube frame work.

For power, a 145 hp Warner Super Scarab seven cylinder radial was installed in an NACA type cowling. The ship's speed was approximately 135 mph, with a cruising speed of 120 mph, a service ceiling of 16,000 ft, with a range of 500 miles.

In selecting a scale, we decided upon one inch to the foot; this gave us a span of 33 in with approximately 182 sq in of wing area. The stabilizer area was increased to free flight proportions. For power, we installed side mounted a Baby Spitfire .045 which proved to be ample power. A Merco 30-second tank was mounted to the firewall for metered flights.

The model is a classy number in yellow with green trim. The wheel pants lend grace and streamlining to complete the picture. The cowl, wing and struts are all removable. Rubber, looped under 1/8 dia dowel runners, holds the wing in position. Performance is terrific.

Although the fuselage is oval in cross section, construction is simple. The formers A to I are first cut from 1/16 sheet balsa. Cement them to the 1/8 sheet balsa crutch, both above and below as shown. The aft portion of the fuselage has 1/16 x 1/8 stringers running to the tail post. The forward half is 1/16 sheet balsa covered. However, before covering the lower half of the fuselage, bend the gear wires from 1/16 dia stock and install. Check the plans for proper position and shapes. The gear is comprised of three different units..." 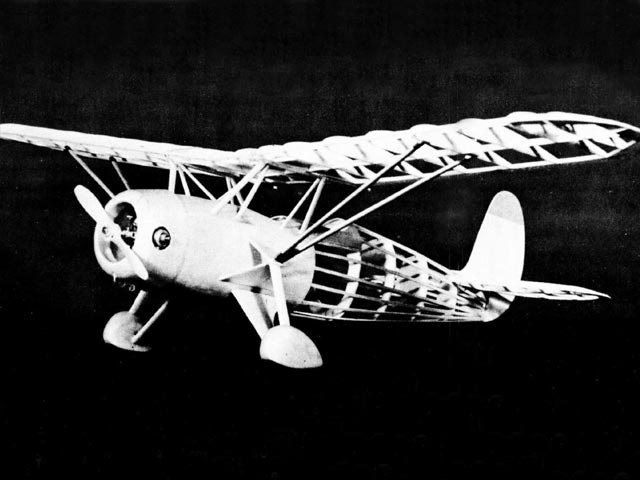