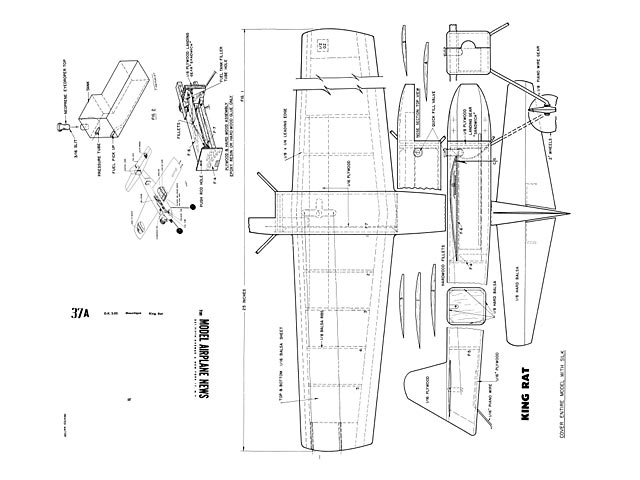 Quote: "King Rat, by Tom Hamble. Jalopy Racing has come a long way since 1957. Now known as Rat Racing, it has picked up speed and many adherents. 1,400 lap races are now commonplace.

The year, 1956. The event, Team Racing. Remember the younger modelers wanting to enter but felt they could not successfully compete against the older and more experienced modelers? We felt something had to be done for them.

Hence, the year 1957. The event, Jalopy Racing, exclusively for the younger modelers. This was a simplified Team Race-type of event with the only restriction being a one ounce tank and a .35 engine. This became very popular locally.

Jalopy Racing became Rat Racing, and as it became more popular and gained in interest, the winning combination was a .35 engine and the tank size limitation was dropped.

The King Rat is an evolutionary design dating back to this period and it combines performance, ease of construction, docile flying characteristics, appearance and ruggedness.

In all. nearly three dozen King Rats have been built by fellow modelers and ourself in the Southwest. From 1957 to the present time, the King Rat design has won or placed in almost all contests, both AA and AAA.

As flooding is an apparent trouble with upright engines and an inverted engine may be damaged in a hard landing, a side-mounted engine is used. It was also found that the side mounting puts the intake at an advantageous angle. It will hold just enough fuel to prime the engine for easy starting, but any excess fuel will run out, eliminating flooding.

The landing gear was placed well forward to eliminate nosing over or cart wheeling. However, any model, regardless of design, can nose over or cart-wheel especially in grass. Keeping this in mind the trailing edges of all control surfaces were swept forward to minimize contact with the ground, and the fuselage was designed to take all the force in such cases.

As the construction used is easy and basic, the following details are intended to help clarify points that are different and very important.

Construction is started with the wing by laying out the wing outline on 1/16 hard balsa sheet. On this glue in place the 1/16 plywood doubler, wing ribs and leading edge. Bevel the trailing edge, install the bellcrank and lead-outs. The installation of the wing-tip filler pieces and the wing tip weight is next. The 1/16 piano wire push rod may now be put in and the top of the wing covered with 1/16 hard balsa sheet. After allowing sufficient time for the glue to dry, sand the wing to the finished shape.

As pressure tanks are now being used almost exclusively, I feel it is important to describe a simple and inexpensive quick fill valve. Cut a 3/16 wide slit in the top of a neoprene eye dropper top. Epoxy this upside down, into the large fill tube in the top of the tank. When filling utilize a piece of 1/8 copper, brass or aluminum tubing in your fuel bulb. Be sure the tube is polished and free of burrs. When the tube is pushed down into the eye dropper top, it spreads the slit open allowing the air to escape around the tube as the tank is filled. When the tube is removed, the slit will close and the crank-case pressure will help keep it closed. Naturally an engine with a large intake using pressure will consume more fuel necessitating a larger tank..." 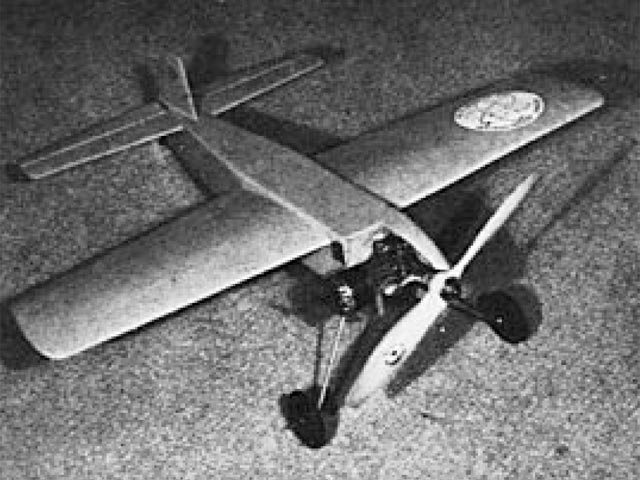