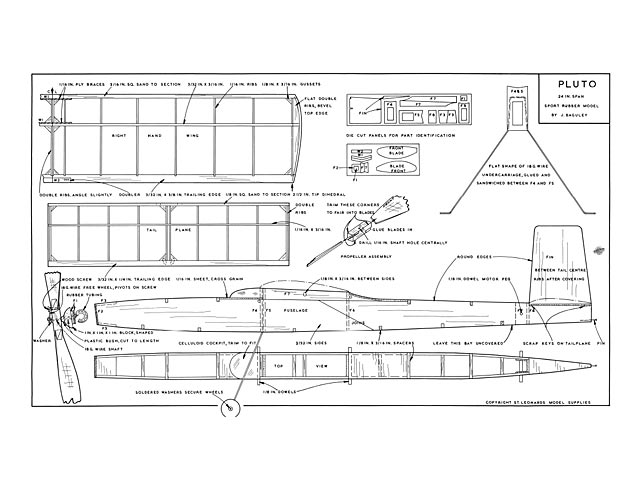 Introduction: The Pluto Rubber Powered Model is designed to be simply constructed and flown, with a majority of pre-cut parts so that beginners can construct it with confidence to be used for sport flying.

Construction: General: Use a backed razor blade for cutting all wood, with steel rule and pencil as necessary. Use a flat building board to build on; 3/4 in block board is ideal. Cover the plan with greaseproof paper if you wish to protect it. To ensure the model remains warp free, force no joints, allow the cement to dry each paragraphed stage and leave wing panels to dry at least overnight before unpinn-ing. When shaping parts use a small modelling plane followed by garnet paper (which cuts cleaner than sand-paper and lasts longer).

Note that the second wing is built over the same wing drawing but with leading and trailing edge positions reversed to provide an opposite hand wing.

Pin the first wing back over the plan with its double rib at the centre lined up to that on the drawing, the leading and trailing edges 'back to front' as described and its tip packed up by 5 in for dihedral so that the second wing can be built on to it.

Construct this wing as the first except that leading and trailing edges should be trimmed to fit the first wing and pre-cemented and allowed to dry before cementing and joining to the first wing. Cut away 1/16 wide pieces of rib at wing centre and glue the 1/16 ply dihedral braces W1 in position.

Noting the grain direction, cut the gussets from 1/8 x 3/16 using the corner of a steel rule, and cement them in place. Shape the leading edge to the cross section shown in the fuselage side view and tips as indicated. Sand all over. Add the 1/16 ply reinforcement pieces W2 at the trailing edge centre.

Tailplane Construction: Construction is similar to that of the wing but note that the ribs are not let into the trailing edge and that the location keys are cemented to it when the model is completed.

Glue in the 1/8 x 3/16 spacers, aligning at one end and cutting to length at the other. Glue together the fuselage ends and glue on F2. Add the 1A6" sheeting similarly to the spacers ie by glueing and pinning aligned to one side and trimming to shape both sides using the fuselage side edges as a guide..."

Quote: "Dear Mary, I'd like to submit Jim Baguley's PLUTO to Outerzone. Attachments here. Tissue in this kit is dark yellow and dark blue. Not sure how useful the wood scans are, but the clear plan should avoid their need. Adrian." 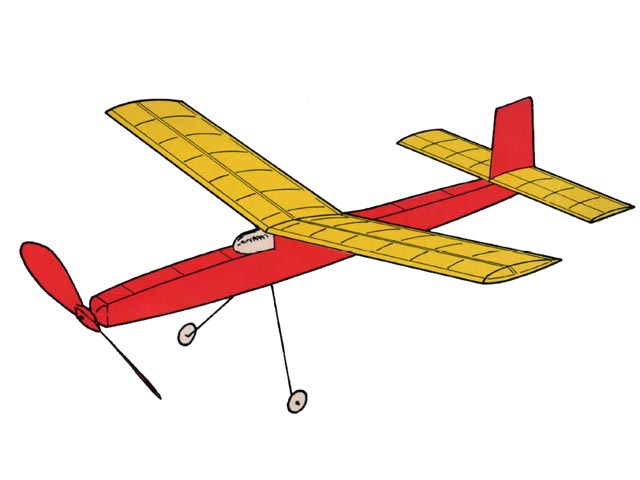