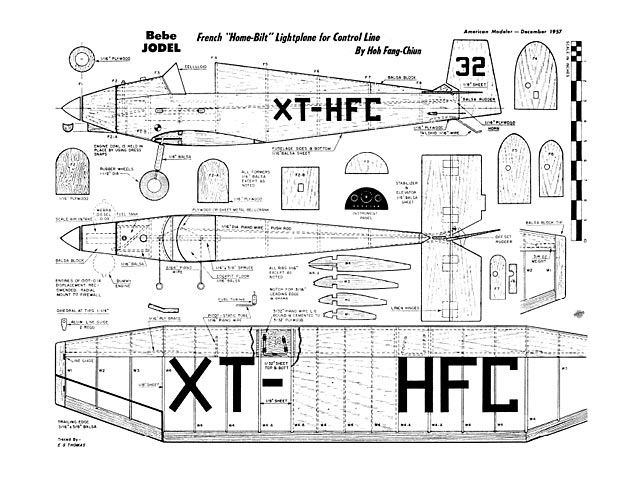 My Bebe D9 Jodel was designed to take most shaft rotary motors of .08-.14 cu. in. disp. It has a wingspan of 29-1/2 in and weighs about 11 oz with a Webra .09 engine. The original is a true scale model with exception of cockpit inside, dummy engine cylinder and the finish.

I flew my original Jodel on 35 ft lines with a seven-by-six wooden airscrew; I was able to obtain a speed of more than 60 mph.

This controline flying scale model is easy to build and easy to fly and pleasing in appearance. There are two points about the model which I would like to mention: 1) The wings should not have a greater Angle of Attack than that indicated on the plans. 2) The Center of Gravity should lie on the point shown on the plans. If the CG is too far forward, the nose will tend to drop when the engine has stopped. Thus it may result in a nose-over or a broken prop. On the other hand, if the CG lies too far rearward, the model will stall during level flight. Proper CG position is between wing LE and 3/4 in back.

Construction of this model is rather simple. The mainplane has a sheeted LE and a solid TE. The tips are carved from small balsa blocks. The body is entirely of sheet and the engine can be mounted either directly on the firewall or on bearers, ie radial or beam. Both the horizontal and vertical tail-plane are cut from sheet balsa.

When building the model I suggest medium balsa for the entire construction. Plank the curvature fuselage top with 3/32 sheet strips, then sand to about 1/16 thickness. This method makes the curvature smoother after the model is finished (conventional 1/16 planking would be only 3/64 thick at the most after sanding revealing fuselage former positions).

Radially mounted engines are preferred. I recommend the OK Cub .099 engine because it fits nicely into the cowling without any modification on the original drawings and its small size allows plenty of space for fuel tubing. The needle valve should be extended by soldering a piece of 1/16 wire to its top.

If a beam mount engine is used, then I suggest metal engine mounts instead of the conventional hardwood bearers. With slight modification in the nose, most engines up to .15 can be readily substituted.

When testing, use full power with the first flight since high speed means maximum line tension, thus making for better control. To prevent dizziness when flying do not use too short a line length. If a .09 engine is used, then 30 foot .008 lines are about the right size. If a .15 engine is fitted in the nose, then a 40' length can be safely used, providing the weather is rather calm.

If you are a beginner in controline flying, you'd better let an experienced CL flyer test your model. The original model, powered by a Webra .09 diesel, flies more than 60 mph.

Apply a slight up-elevator for take-off and the model should leave the ground within a few feet. When airborne, the original is very stable, responding quickly to the handle. When you feel that the engine is going to stop, hold the model in level flight at an altitude of about 5 feet. After the engine has cut, hold the elevator neutral until the main wheels are about to touch the ground. Then apply full up and the model will set down beautifully on three points." 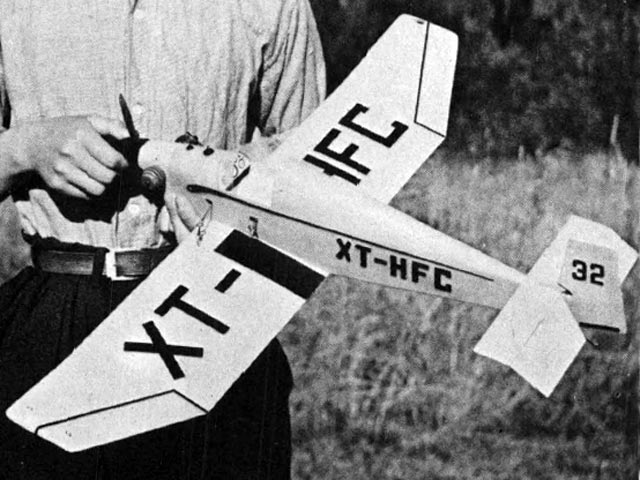 What a bright young man Mr. Hoh must have been. He passes much under the radar but here in Oz he has 18 fine designs to his credit and I'm sure these are not the only ones. And if they were they are an impressive line-up.
Miguel - 17/06/2021
So true Miguel!!!
Pascal Rodesch - 17/06/2021
He passed much too young.
Richard Browning - 17/06/2021
Hoh Fang-Chiun seems to be an intriguing character to many modelers, me included. He seemed wise beyond his years, and his designs always appear to be sound and purposeful, yet they ooze charm.
RC Yeager - 18/06/2021
There's a short but clarifying bio of him in https://www.rcgroups.com/forums/showthread.php?2645118-Hoh-Fang-Chiun . He'll be up there making noise in that fluffy Cumulus where the souls of good modellers abide :-)
Miguel - 18/06/2021
Add a comment