Quote: "The involvement with my high school band and choir students keeps the blood pressure pumping to do my best for the vocalists and instrumentalists under my tutelage. A different sort of high anxiety occurs when vocation becomes avocation. My excitement of teaching extends from my classroom to include the sport of competitive control-line precision aerobatics. Helping music students perform or assisting a fledgling model flyer practice and exhibit the manoeuvres of a given pattern is a thrill in my daily routine. Thus routine is not routine.

The chosen name of this model is blatantly stolen from Richard Dreyfuss's well-known movie Mr Holland's Opus. His role as a music instructor runs parallel to mine with his realisation that he can make a difference to individuals through constant hard work and the choice of correct work ethics. Mr Brickhaus's Opus is the culmination of a learning curve similar to a well written lesson plan in the educational process. The Opus is the current evolution of a series of models which taught me the value of friends in a hobby/sport and how a well developed precision aerobatics pattern may be flown with a capable and time tested model.

Evolution: Eight Buccaneers (oz6874) were the early lineage of the current aeroplane. Buccaneers were the mainstay of my personal air force beginning in the early '70s and continued into the mid '80s. Fox 35s powered the first two while Super Tigre 46s and OS Max 40VFs powered the final six versions. A time was spent tracking through various other ventures before returning to an updated PA 40 piped model entitled the 'Scepter'. The successes of this variant kept the candle lit in the research and development department and the Opus is the next version to reach the pedestal in this continuing line.

The Opus is a 690 square inch winged pipe powered stunter with lines reminiscent of a combination of '60s Classic birds and the Bob Hunt 'Genesis' series. Nose and tail moments are in line with current stunt models. Nose length is 10.25 in while the tail moment is 17.5 in as detailed from the flap hinge line to the elevator hinge line. The stabiliser and elevator is 25% of the total wing/flap area. Suggested motors to use are those which you feel you are most comfortable with and can, in your estimation, pull an almost 700 square inch wing and 60.5 ounce weight through the FAI pattern.

The Opus and its predecessor the Scepter qualified in the US Nationals in 1996, 1998 and 1999. The Opus, like its earlier version, performed well under local contest situations with multiple top three finishes consistently. I normally fly eight to eleven non-National events during the summer competition season. This means a short drive of three and a half hours for the close events and up to nine hours for the further distance contests. The midwest area of the USA is blessed with a large number of contests and one could keep busy throughout the summer attending judged events.

A note or two on building: The wing and stab are foam although accurate foam templates can be transformed into a ribbed version with little trouble. I would suggest using a 'C' tube spar system with upper and lower spars, utilising medium hard 1/4 x 3/8 balsa. This is similar to Les McDonald's Stiletto (oz6665) precision aerobatics model. Use 2" spacing for all ribs and adjust the tip distance to gain the offset on the inboard wing. This model is designed for the skilled PAMPA Intermediate, Advanced and Expert pilots. It is suggested that the builder should have built two or three stunters before starting this project. Nothing exotic has been used in the design or building phase of the Opus so typical modelling techniques will enhance your construction of the model.

The original version as first flown utilised partial flaps with trim tabs at each extremity. Later thoughts led me to remove the partial flaps and replace them with full-span versions. Note the outboard flap has more tip chord than the inboard tip. This trim adjustment has made the Opus easier to fly and I will incorporate this feature into future examples and designs. It is important that the grain lines of the flaps, elevators and vertical rudder be followed as outlined on the plans. Trueness of structure, light weight and strength are imperative in the construction of these items.

Fuselage doublers should be attached to the fuselage sides with slow drying epoxy. They should be aligned carefully and put under extreme pressure while the epoxy cures. Do not use an over abundance of epoxy, as a close fit between the sanded parts should allow the glue to firmly grip the pieces together. Sandable water-based glues can be used to complete the rest of the structure although I like the slow epoxy to glue the two foam wing halves together in their respective cradles. Jim Pearson of Marietta, Georgia can supply the basic foam cores with a variety of options..." 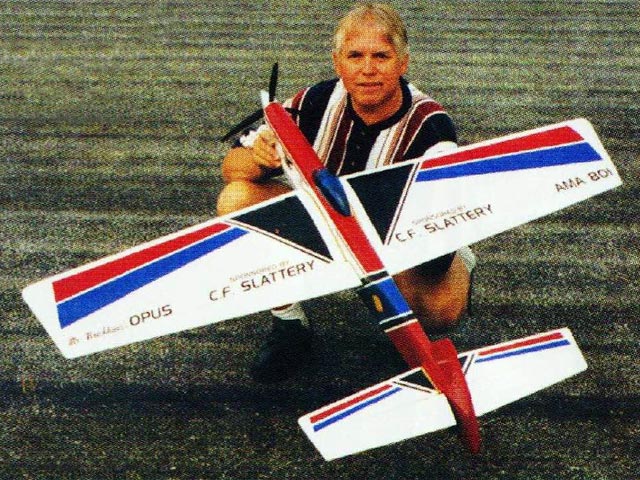