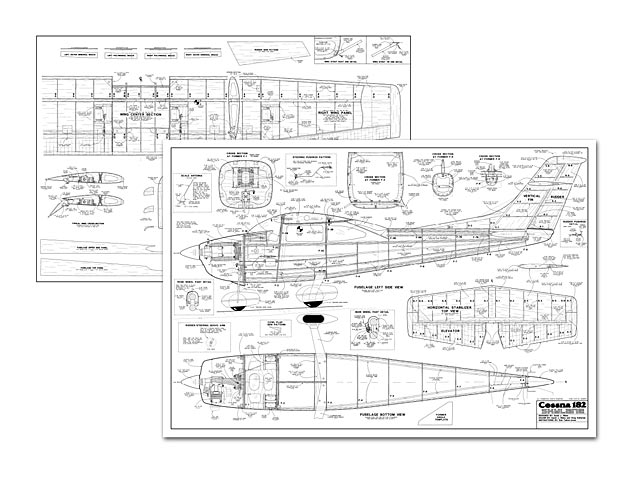 Quote: "The Top Flite 182 Skylane makes an excellent sport scale competition aircraft. Its large size and accurate scale outline afford the opportunity for the scale builder to go all out with the surface details and finish. With the abundance of Cessna 182s in airports around the world, finding a full-scale plane to document and duplicate for competition shouldn’t present a problem. The Top Flite Cessna 182 has demonstrated flight characteristics rarely found in any scale model. Anyone who has mastered a trainer with ailerons should be able to fly this model with a high level of proficiency from the first flight. It handles very much like a full-size Cessna - smooth and predictable. Our 11 pound prototype was flown with an OS .61SF 2-stroke and 12 x 6 prop throughout much of its flight testing. This combination provided more than ample power for all normal flight maneuvers and aerobatics.

Because of its 81 in wingspan, the Top Flite Cessna 182 is eligible to be entered at IMAA events. In order to be IMAA-legal, some of the control components and hardware may need to be replaced to conform to Giant Scale rules even though this model does not require heavy duty hookups.

The cockpit interior has been engineered to be free of obstructions, servos and pushrods. This feature provides the modeler with the space to build a scale interior with front and rear seats, baggage compartment, and full figure pilot.

The nose of this model has been engineered to allow you to completely hide most 2-stroke engines in the recommended range. A Top Flite 2-stroke muffler with headers to fit several of the recommended engines have been specifically designed for and tested in the Skylane and other Top Flite models. This muffler provides good sound reduction while fitting entirely inside the cowling...

ENGINE SELECTION The recommended engine size range is as follows:

The prototype Skylane that weighed 11 pounds with all of the options, including flaps and operational lighting, was flown with an OS .61 SF. This engine provided excellent performance and more than enough power, even in gusty winds. Although larger engines can be used to power this model, the extra horsepower is not needed.

The included adjustable engine mount will hold a range of engines from .60 2-stroke through 1.20 4-stroke.

A special Top Flite header and muffler are available that will fit inside your cowling. They are primarily designed for 2-stroke engines mounted horizontally, as used on our prototype.

OPTIONAL FLAPS This model is designed to incorporate scale flaps; however, be assured that flaps are optional and not necessary for an excellent flying experience. The only difference is, without flaps the takeoff roll is a little longer and the landing speed is slightly faster.

The flaps are not difficult to assemble, but they do require good craftsmanship if they are to fit well. They add nicely to the model’s flight characteristics and scale appearance while causing no bad effects. Only slight trim correction is needed when they are used with the recommended throws. The flaps add drag and lift to the model on landing approaches, which gives the plane a very steady, locked-in feel.

The flaps require one extra channel, a Y-harness, and two standard servos. They are a highly recommended fun option for those who wish to install them. More information on the use of the flaps may be found in the 'Flying' section.

OPERATIONAL LIGHTING We installed an operational lighting system for added realism and scale appearance. If you plan to use a similar system you should route the wiring before enclosing the wing and fin. In lieu of installing the actual wires, string can be taped into position for use in pulling the wires through the structure after covering. We used a separate servo connected to the retract circuit of the radio (instead of Y-ing into the flap servo) to operate the landing lights. The rotating beacon and position lights were connected to a hidden toggle switch. (See Optional Lighting in the next section)

If you plan to compete with the trim scheme shown on the box, here are a few things to consider:

The full-size Cessna 182 'Q' Skylane, N735PE, that was modeled for this kit is hangered near Birmingham, Alabama. The 182Q version was manufactured from 1977 through 1980. During this time 2,540 were built. We designed our model from Cessna's own 1979 3-view drawings for accurate scale outline.

If you plan to enter your Skylane in competition, this kit will qualify for the Sport Scale category without any changes. Always work from photos of a full-size aircraft when finishing your model because that is what you will need for judging documentation..."

Note the manual includes parts ID sheets on pages 7 and 8. 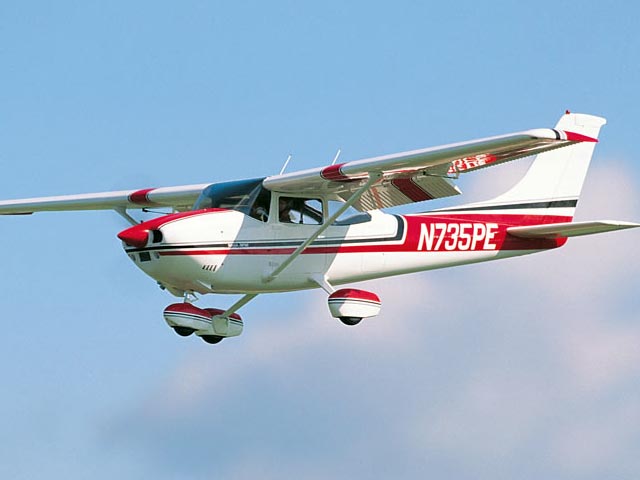