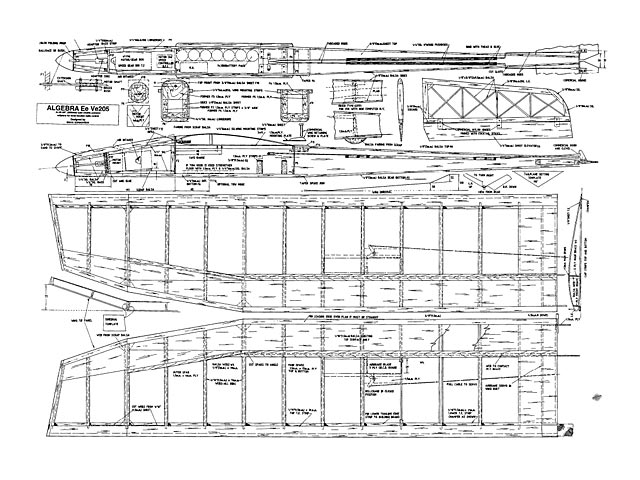 Originally this model was produced as an EMP kit - and is still available as such - but with its very straightforward construction it can easily be made from just a plan at less cost (but more work!) than a commercial kit.

The thinking behind the design was to achieve a glide performance equal to any purpose-built glider model of similar size. Such features as triple-taper wing plan were adopted for better lift distribution, and 18° tip panel dihedral for flat, low height loss, turns. The Seelig 3021 wing section gives excellent handling with the wing loadings associated with electric powered models, and of course the V-tail is both lighter and produces less drag than any conventional cross or T-tail layout.

Other features include a clean, neat fuselage shape where the wings do not rely on drag-producing rubber bands to retain them yet can be removed in seconds to reveal the battery pack. There is enough room within the fuselage for 10 sub-C size cells, but it is assumed most people will use 7 cells, as an excellent performance can be obtained from a pack of this size and of course 7 cells can be fully charged from a car battery with an inexpensive charger.

The first prototype was powered with a Graupner Speed Gear 500, 7.2v motor with a built-on, in-line gearbox driving a 28 x 20cm folding prop. Rate of climb with this unit is extremely good and will rival that of motors costing twice as much. Mike Proctor fitted his version with an Astro 05, and won the BEFA Electro Slot League in '97, so it is certainly competitive.

Details of installing an Astro 05 are shown on the plan, and there is enough room within the nose to accommodate a variety of motors/gearboxes.

The V-tail will require the mixing of rudder and elevator controls. Most computer R/C systems will have this facility, but if not there are inexpensive mechanical or electronic mixers available. Construction is quite straight forward using traditional balsa and plywood: the wings use an I-beam main spar made from 1.5mm ply top and bottom with balsa shear webs between which is easy to assemble, light and strong. Tail surfaces are made up with geodetic cross bracing for low weight and stiffness.

As mentioned there is space within the fuselage to accommodate all the necessary components and although standard servos can be used, minis are better

Two piece wings: For ease of transportation you may wish to make the wing panels in two separate pieces, so the plan suggests a way of doing this. The joining wire must be approximately 4.5mm (5swg) in diameter and of good quality spring steel: the tubes to fit the wire may be brass or aluminium. Wall thickness of the tubing will affect the outside diameter of the tube - this should be slightly less than the thickness of main ply dowel block, shown at 6mm thick. Cut the wire to length of 140mm, then bend to 8 degrees, using the plan or W13 ply brace as a pattern.

W13 should then be cut in half, dead in the centre - also W12. Make up the dowel block to the drawing from 6mm ply and cut slots to take the metal tubes. The tube must not be a greater diameter than the thickness of ply: file tube as required. Now cut the shear webs from 1.5mm ply, with the grain vertical.

The dowel block assembly should be glued to W13 with epoxy. The wing panels are then made as per the instructions, but you will require a 4.5mm (W11) wooden dowel securely glued into each panel as shown, and of course corresponding holes drilled through E3.

Wing: The wing is the most important part of any aircraft and it is essential that it is made accurately - a flat and true building board is essential. Use white PVA glue throughout. Lay the wing drawing on the board and protect it with clear film. Wing ribs should be made from 3mm medium grade balsa..." 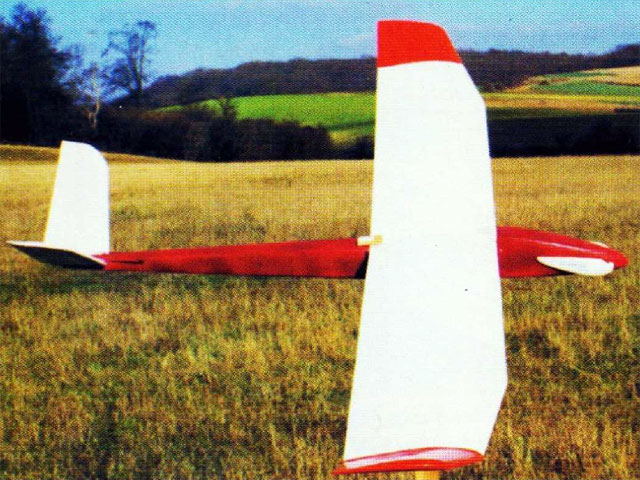