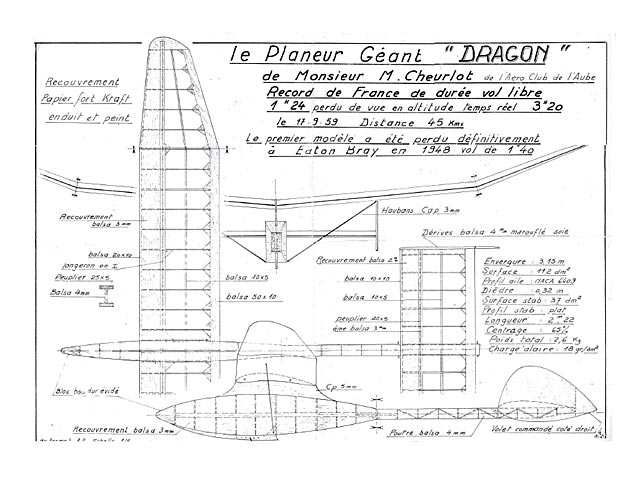 Note this is not a fullsize plan. Plan is at 1/5 scale.

Note this is a low resolution plan, in greyscale at 100 dpi.

Description: Dragon was designed to make full use of maximum FAI area permitted under the new rules, and as such was first successful contest model to exploit them in Europe. Three points were particularly studied in its design: ease of transport, strength and launching material.

Transport of so large a machine is facilitated by having the wings in four pieces and the fuselage in two, the junction being aft of the pod fuselage, where the boom begins. Strength was obtained fairly lightly by the rectangular fuselage, stout hardwood backbone and skid, and hardwood nose made in two pieces and stuck to an extension of backbone. Bracing was employed to strengthen the boom. Covering is of the strongest paper available commercially in two layers, doped, painted and varnished.

For the towline, a specially strong four-stranded towline was made up as the designer had previously lost contests through his heavy machines breaking their cables. This, though adding to launching drag, and requiring harder work to launch, has paid ample dividends in peace of mind and contest success!

Performance: British modellers will remember Dragon at Eaton Bray in 1948, where after brief tests it was lost on its sole contest flight of 30 min OOS, and so far as we know never recovered! It was chased and kept in sight for 1-1/2 hours, and finally lost over twenty miles away. Other French contest times include 6 min at St Dizier (2nd) and 14:53 at Compiegne (2nd).

The designer has since built a Dragon II to replace the one lost - which is some token of his belief in its potentialities." 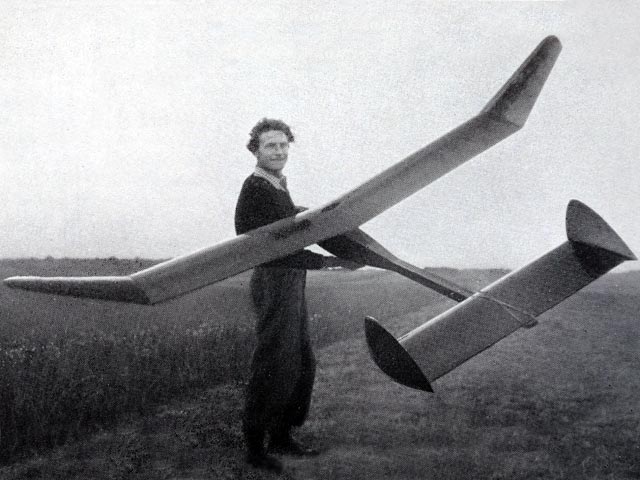