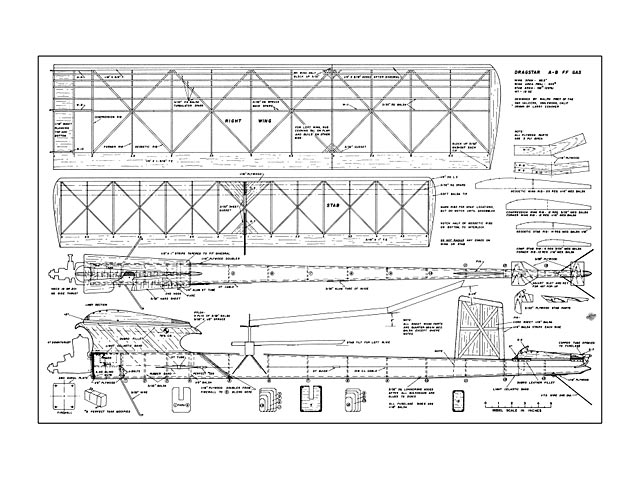 Quote: "Dragstar, by Ralph Prey. New rules turn free flight into a drag race in the sky. Try this proven contest winner for Class A or Class B competition. Highly recommended.

Dragstar torches off the line like a dragster and stays lit through the climb. Dragstar's design favors easily-built sheet fuselage, solid rib warp-proof geodetic construction, efficient high aspect ratio rectangular wing and stabilizer. The flight pattern is a fast, steep climb with reserve momentum pushing it in a smooth glide transition. The high aspect ratio wing and stabilizer give it an efficient glide. Results are a triple max contest-winning A-B combo.

Adjusting the Dragstar is sure and safe. It climbs right into the wash-in of the right main wing panel. Engine thrust controls the amount of right turn and also any loop tendency. These adjustments are the only power trim and no rudder tabs should ever be used. A rudder tab at Dragstar's speed is too critical because rudder effect varies as the speed. With the fin built into the fuselage, there is no need to key the stabilizer. Results - Dragstar's tail feathers are clean, no tabs or keys and, above all, no urge to tinker. A tilted stabilizer is used to control the glide.

The airfoil selected for Dragstar's design was the contest-proven Lucky Lindy (oz10910) by Larry Conover, member of the famous Quintet in FAI competition. Lower surface is flat.

A word of caution to all Dragstar builders: Use the Lucky Lindy airfoil. Other airfoils were tried on the Dragstar but could not compete against the winning numbers of Lucky Lindy's curve. Another word of caution: Use the warp-proof geodetic construction, it is easy to assemble and stays true at all times. The Dragstar speed will twist a straight rib wing of Dragstar's high aspect ratio; result, an uncertain power pattern and risk of wing flutter. The engines selected are the contest proven nitro-burning Veco 19 and 201. These engines are able to burn high nitro content fuels - 50% at hot midday temperatures. Engine thrust is maintained throughout the day, which means same high speed, momentum transition and consistent flight patterns. Never change props or engine thrust adjustments to regain lost speed or poor transition. It takes nitro and a hot mill to torch off the line and keep it lit full run.

You have the inside dope of Dragstar's loot-grabbing, triple max performance. Now let's see how Dragstar's put together. Before you start to make changes, build at least one Dragstar from the plans. Then, if you wish to change it, keep your temper as the first Dragstar shuts down your altered job. General Information: Sig contest balsa or equivalent should be used to keep the weight under 20 ounces. Quarter-grain balsa and 5-ply birch plywood are used for maximum strength to weight ratio. All joints must be pre-glued and re-glued after assembly, making a total of 3 glue applications.

The Dragstar is built in a specific order; in particular, the method of locating the pylon. The position of the pylon is determined by shifting the pylon according to the Center of Gravity (balance point) of each particular model. Therefore, it is important that: (1) stabilizer and wing are covered and doped; (2) fuselage (except top at pylon area) and rudder covered and doped; (3) components installed, engine, prop, VTO gear, fuel tank, timer. Placing the pylon this way will asure proper CG (balance point) without adding unnecessary weight to nose or tail. Further, this method will make it easier to adjust the power and glide flight patterns." 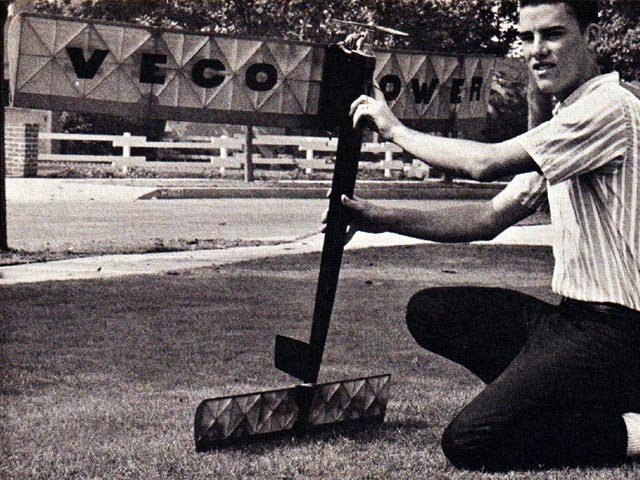