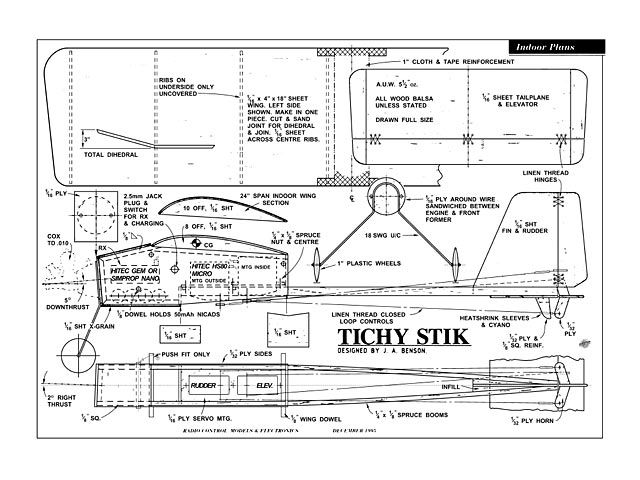 Note the plan shows 18 in wing for outdoors, with alternate 24 in wing for indoors with thicker airfoil.

Note this is a low res scan, greyscale. If anyone can at some point submit a higher res scan, we'll replace this with a 2-colour version at say 400 dpi [Fixed now, see below].

Quote: "Raid your scrap box and build your very own Tichy Stik.

I first saw a Cox .010 engine in an American department store some thirty years ago selling for around £4. Even though I wasn't into modelling at that time, I couldn't resist buying it to see if it was real or just a fancy tie pin!

Later, when indoor flying started at the ME Exhibition, I remembered that beautiful little red and black engine hidden away somewhere and started planning a simple, quick to build radio controlled model for it.

It obviously had to be very light, robust enough to withstand hard impacts and to use readily available radio gear. My son had a spare Hitec GEM two channel receiver in a buggy and two Hitec HS80 micro-servos with a 50 mAh nicad, all weighing in at 2-3/4 oz so the plane could weigh 3 oz or so to have a reasonable wing loading.

I like the twin boom stick style of construction, so I designed the minimum size around the main compnents with the servos exposed under the fuselage and with linen thread closed loops controlling the rudder and elevator. The wing is 18 x 4 in sixteenth balsa simply curved around the ribs and then split and re-glued to give plenty of dihedral. It all seemed very small, so TICHY STIK was born.

Flying first: Normally you expect the flying report to be at the end of the article but this time it is in the middle, so I can explain why it has an alternate wing!

I didn't really know what to expect with such a small model in breezy conditions, however after a gentle hand launch it climbed away briskly and proved to be very responsive. In fact, I wondered if it should be re-named Twitchy Stik! I soon realised that such a small model with very little inertia is very susceptible to the smallest of wind gusts and it really was relatively very stable and fun to fly.

It's surprisingly quick though, perhaps too much so for indoors. So I made a 24 in span wing with a thicker section, plus additional lightening holes, and planned on reversing the propeller to reduce the speed. This works well outdoors in calm conditions with the normal prop position.

On the board: Building is easy. Cut the two fuselage sides out of 1/32 ply and glue the booms on with 1/8 balsa quadrant around the edges. Don't forget to make the sides handed and the right side 1/16" shorter to glue in a little side thrust.

The wing is the quickest one I have ever made. Position two 1/4 in square strips on your building board to give the airfoil curve then gently steam the 1/16 sheet into a bend before pinning down and fixing the ribs with cyano.

Use a 2.5 mm jack plug with a switched socket for the radio charger/switch. Linen thread is used for the closed loop controls, fastened with a short length of heat shrink tubing and fixed with a drop of cyano.

Always think weight - the lighter the better, and the easier it will bounce on landing. Tichy Stik is fun to fly, creates a lot of interest and you don't really need a 'BEE' certificate to fly such a small 'buzzy' model!"

Update 13/09/2021: Replaced this plan with a clearer copy, essentially redrawn from scratch, thanks to TonyP. 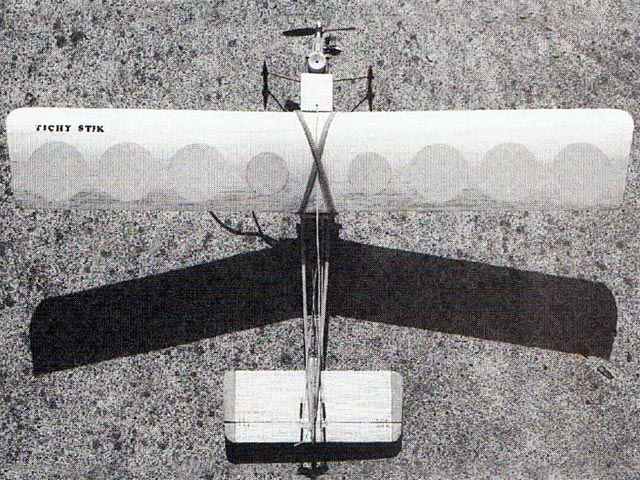