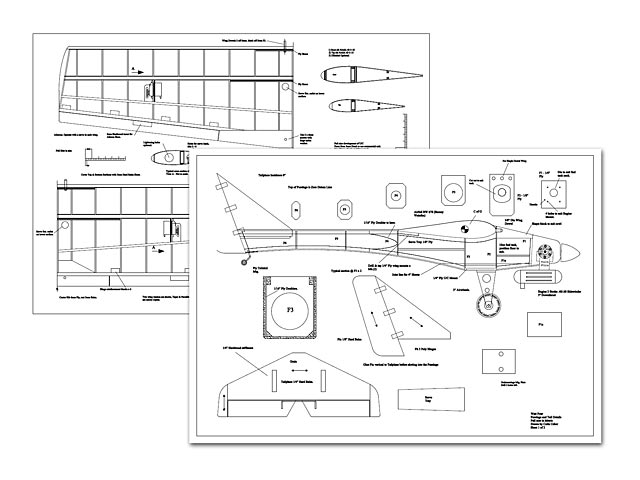 Note this is a clone of the Chris Foss Wot 4 design. The original design used a foam wing, this here shows a built-up wing. Note the plan shows choice of two wings, either straight-chord or tapered.

Note this plan was previously available as a free download, from the now-defunct Colin Usher website. We found this file in 2021 using the Wayback machine, see datafile link.

Quote: "Watt Four Notes: The original [Wot 4] design has been at the top of the best selling list of model kits for years and an ARTF version was released some while ago. This has now been followed by an Electric RTF 'Foamie'. It is a simple model but it has a sparkling performance and is a superb follow on from a basic trainer. A plan has never been released, so it is impossible to build your own exact copy from scratch. Building a near copy is not as easy as it seems, every version from the Mk I to the latest Electric Foamie is different.

I have built a number over the years from so called 'official plans' to drawings made from crashed models or from parts copied from a kit prior to assemble. They all look the same but vary considerably in detail. For example the chord on the ARTF is 11 in although the span is the same, but the MK II has a 12 in chord. The Foamie is only 47.5 in span and the XL (Extra Large) is 68 in.

Fuselage shapes also vary considerably, as does the hinge line for the rudder, vertical on the ARTF, sloping on the MK II. Then we have the Taper Wing version with a slightly larger span, and so it goes on.

The drawings given here are in pdf format and for copyright reasons not an exact copy of the original, whatever that may be. For a start the wing is built up construction (now copied by the new ARTF version) and the airfoil is not as per original. This is an NACA 63 0 18 Root & 63 0 15 Tip. Other minor changes make it slightly different.